In late 2020, the Washington Supreme Court was called on to decide the legality of a Tim Eyman initiative to lower car tab taxes. The court ruled the initiative was unconstitutional because it addressed more than one subject.

At the same time, in a footnote on page 13, the court overruled a 60-year old decision on another case that concerned whether a law addressed more than one subject.

But the dry legal analysis masked the import of what the court did. It overturned a 60-year old decision that had upheld racial segregation.

It called the old decision “incorrect and harmful” and “an example of the unfortunate role we have played.”

How did the court go from deciding a car tab case to, in a footnote, overruling a case on segregation? 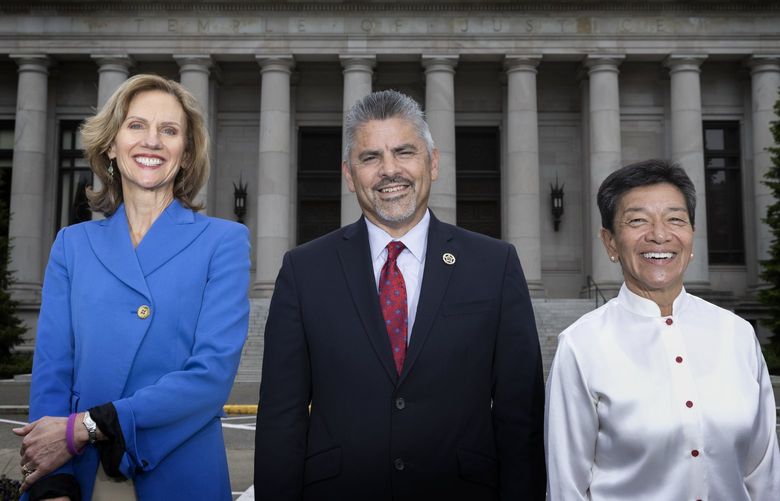 Chief Justice Steven González, who wrote the opinion for the unanimous court, said the legal principles in the cases matched. But González was already well aware of the cemetery case, the black mark it represented in the court’s history, and was biding his time for an opportunity to repudiate it.

González has a list, produced by his law clerks, of what he says are some of the worst decisions in the history of the state Supreme Court.

As the state Supreme Court in recent years has been pushing to reform a centuries-old racist criminal legal system, most of the cases on González’s list concern racial injustice.

Nisqually Chief Leschi is the namesake for schools, a lakefront park and a ritzy Seattle neighborhood. But in 1858 he was hung in Steilacoom after being convicted of murdering a militiaman during the Puget Sound War of 1855-1856.

His trials were “convoluted and error-filled,” according to the Washington history site HistoryLink, and included the sheriff who was the primary witness against Leschi also serving as the foreman on the grand jury that indicted him.

Washington’s territorial Supreme Court upheld Leschi’s conviction and affirmed his death sentence. The decision accused the Nisqually of having “sacrificed the lives of so many of our citizens.”

In 2004, at the urging of the Nisqually tribe, and after the Legislature passed resolutions on the subject, a special Historical Court of Inquiry and Justice was set up to rehear the case.

The court ruled that even if Leschi had killed the militiaman, he couldn’t be charged with murder because he was leader of a sovereign nation in a time of war.

“We cannot bring Leschi back to life, and we cannot restore Leschi to his land,” the then-Pierce County executive said at the time. “We can, we must, restore his good name.”

Alec Towessnute was charged with fishing crimes, even though the tribe’s treaty with the United States gave him the right to fish on the tribe’s historical fishing grounds.

The Supreme Court upheld Towessnute’s conviction, calling the Yakama “a dangerous child “and incompetent occupants of the soil.”

“The premise of Indian sovereignty we reject,” the court wrote. It ruled that treaties with Washington’s territorial government were not binding after Washington became a state.

In 2020, the Supreme Court overturned the decision, writing that they “repudiate this case, its language, its conclusions, and its mischaracterization of the Yakama people.”

This case also involved alleged fishing crimes by a tribal member, this time a member of the Lummi Nation. The state Supreme Court, in 1916, called it “identical in all respects” to the Towessnute case and complained of the “ravages” that Indian fishing rights reaped on Washington’s salmon industry.

This was another case involving the conviction of a Yakama tribal member for exercising his treaty-protected fishing rights.

“When your officers punished us for taking fish at the places reserved
you violate your treaty and your promise,” George Meninock told the Supreme Court in 1920, appealing his conviction for fishing in the Yakima River. “And while you may punish us because you are the power, yet before God, whose justice is more than that of men, we are innocent of having done wrong.”

This was another similar case, but this time concerning a Yakama tribal member convicted of hunting crimes, even though treaties gave him the right to hunt on open and unclaimed land.

Again, the court referenced its decision in the Towessnute case, but this time heaped on further insult.

“The Yakima tribe was not an independent nation nor a sovereign entity of any kind, the Indians being mere occupants of the land,” they wrote.

In 1957, Bernice and Milton Price sought to bury their 3-year-old son, who had drowned in a neighbor’s pool.

Evergreen Washelli Cemetery, in north Seattle, told them the boy could not be buried in a section for young children, because it was reserved for whites only.

A 1953 state law explicitly forbid cemeteries from denying burial based on race, but the Supreme Court ruled the law unconstitutional because it addressed multiple subjects.

A concurring opinion gave an impassioned defense of the “right of segregation.”

“If Negro children were admitted,” Justice Joseph A. Mallery lamented, “its white exclusiveness would be gone.”

He complained of a “Negro crusade to judicially deprive white people of their right to choose their associates in their private affairs.”

The Supreme Court overruled the decision in 2020.

“They got the law wrong,” González said last month of the 1960 decision. “But in addition to that, the language that they used in getting there was really offensive. And we need to point out that we disavow that language.”

In 1959, Robert L. Jones and his wife tried to buy a house in the then-all white Seattle neighborhood of Ravenna. The homeowners, John J. O’Meara and his wife, refused to sell to them.

The law defined publicly assisted-housing as including any house bought with a federally insured mortgage.

The law, the court complained, prohibited O’Meara “from doing what his neighbors are at perfect liberty to do.”

“The personal characteristics of the home owner and would-be buyer are irrelevant to the constitutional protection of private property, which is absolute.”

One of the Jones’ lawyers, Charles Z. Smith, would go on to become Washington’s first Black Supreme Court justice.

In 1971, John Singer and Paul Barwick walked into the King County auditor’s office and asked for a marriage license. They were denied. Their ensuing legal battle would become one of the first court cases in the nation seeking same-sex marriage rights.

The state Supreme Court ruled against them, writing that the state could ban same-sex marriage because marriage was based on procreation.

“The prohibition of same-sex marriages results from the impossibility of procreation,” the court wrote.

The state Legislature passed a law legalizing same-sex marriage in 2012, and voters approved the law later that year. In 2015, the U.S. Supreme Court struck down all state bans on same-sex marriage.

David Gutman: 206-464-2926 or dgutman@seattletimes.com; on Twitter: @davidlgutman.
The Seattle Times closes comments on particularly sensitive stories. If you would like to share your thoughts or experiences in relation to this story, please email the reporter or submit a letter to be considered for publication in our Opinion section. You can read more about our community policies here.
Advertising