An Auburn-area man and prominent member of the far-right Proud Boys extremist group, already indicted as a leader of the 2021 attack on the U.S. Capitol, faces a new charge of seditious conspiracy among other allegations in the deadly insurrection.

Ethan Nordean, 31, was among five Proud Boys leaders named in a new indictment handed up Monday by a federal grand jury in the District of Columbia. The new indictment adds three additional federal felony charges — seditious conspiracy, assault and destruction of government property — to the six that Nordean already faced.

The sedition charges are among the most serious filed in connection with the Jan. 6, 2021, uprising. If convicted, Nordean and his alleged co-conspirators could face up to 20 years in prison on their sedition charges alone.

In all, Nordean could face up to 50 years in prison if convicted on all counts.

The new charges allege that Nordean — working with other prominent Proud Boy extremists, including the group’s national chairman, Enrique Tarrio — “conspired to oppose the lawful transfer of presidential powers by force” through their involvement in the so-called “Stop the Steal” movement, in which supporters of former President Donald Trump claimed President Joe Biden was fraudulently elected in 2020.

The new indictment states the conspiracy included “obtaining paramilitary gear and supplies” such as tactical vests and radio equipment to coordinate the Jan. 6 march on the Capitol with the intent to prevent Congress from ratifying the results of the presidential election. The indictment alleges Nordean was part of a hand-picked group of Proud Boys leaders who in the weeks leading up to the insurrection engaged in “encrypted communications” to plan the attack. 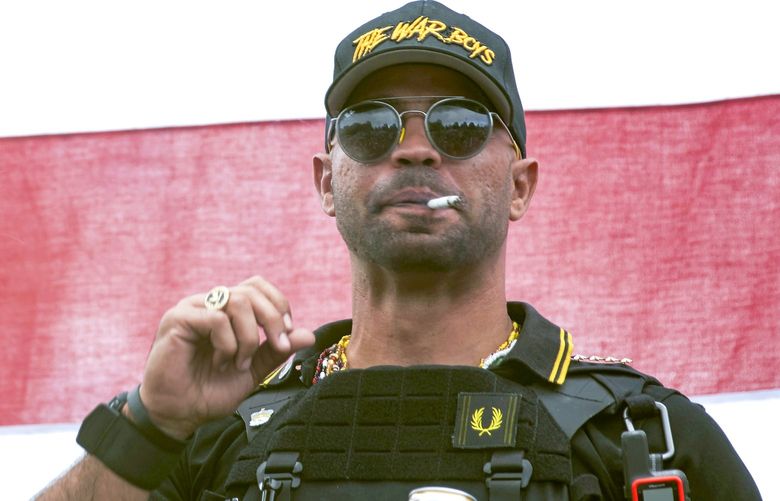 Nordean, according to the indictment, creating a crowdfunding page intended to raise money for “protective gear and communications” for the insurrection. He also helped spread the word that Proud Boys were to dress “incognito” and avoid wearing their traditional yellow and black garb that has set them apart at other demonstrations, the indictment says.

The indictment alleges Nordean — also known as “Rufio Panman” — flew from Washington state to the District of Columbia using a debit card belonging to a relative of Tarrio’s, and had a number of online and in-person meetings leading up to the attack.

After the FBI arrested Tarrio two days before the insurrection, Nordean and as many as 60 other Proud Boys joined an online group called “Boots on the Ground” that continued planning a march on the Capitol and congressional office buildings, according to the indictment.

The night before the attack, Nordean and another Proud Boys leader sent an encrypted message to the group, telling members to meet at 10 a.m. on Jan. 6: “Do not be late! Do not wear colors! … Come out as a patriot!” the message said, according to the new charges.

Nordean was one of more than 100 Proud Boys who gathered at the base of the Washington Monument that morning, the charges allege.

Subsequently, Nordean was captured on video leading a pro-Trump mob to the Capitol just before it was breached and ransacked, according to the charges.

The indictment alleges that Nordean and Biggs, another indicted Proud Boy, led the crowd as it tore down barricades separating the mob from law enforcement officials trying to protect the Capitol and the elected officials inside.

Nordean was included in a selfie-style video, taken that afternoon, in which Biggs declared, “We just stormed the [expletive] Capitol. Took the [expletive] place back. That was so much fun.” According to the indictment, Biggs then said, “January 6 will be a day in infamy.”

Charging documents identify Nordean as the self-described “Sergeant of Arms” of the Seattle chapter of the Proud Boys, a group known in the Northwest for street brawls and violent clashes with antifascist activists.

Calling themselves a “pro-Western fraternal organization for men who refuse to apologize for creating the modern world; aka Western Chauvinists,” the Proud Boys have been condemned as a hate group by extremist watchdogs, racial justice advocates and others.

Nordean is being held in a Virginia jail pending trial, according to his attorneys.

David Smith of Alexandria, Virginia, one of his attorneys, acknowledged the new indictment Monday but said he could not comment further.