BOTHELL — One police officer was killed and another was injured in a shooting in downtown Bothell on Monday night, after a traffic stop turned into a brief car chase, police said.

The chase began when two Bothell officers tried to stop a car on Bothell Way Northeast around 9:40 p.m., said Everett police spokesperson Aaron Snell, who answered questions with Bothell police Capt. Mike Johnson at a news conference early Tuesday. The driver led police on a short car chase before he apparently struck a pedestrian in the 10300 block of Woodinville Drive. At the end of the chase “gunfire was exchanged” with at least one officer firing at the suspect, police said.

Assisting police arrived to find one of the two Bothell officers dead and the other injured. The wounded officer was taken to Harborview Medical Center with non-life-threatening injuries and was released from the hospital by 6 a.m. Tuesday. The pedestrian, who was also taken to Harborview, was still hospitalized, in satisfactory condition.

Bothell police tweeted around 3:30 a.m. Tuesday that a suspect had been taken into custody after hiding on a rooftop. They had earlier said the male suspect was at large, and asked anyone with information to call 911. During the search, Johnson urged the public to “stay home, lock your doors, and if you see something, say something.” 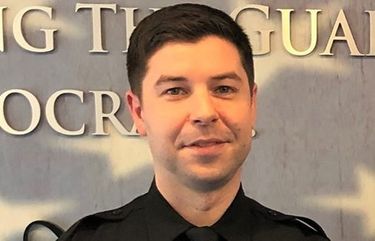 The reason for the initial traffic stop was unclear.

No further information about either officer was immediately available, but Johnson said Tuesday morning that the department would release more soon.

The officer who died “had a lot of career left in front of him,” Johnson said.

It was the first time Bothell’s police department had an officer killed in the line of duty “in anyone’s memory,” he said.

In October 2018, a Bothell police officer was injured when a man suspected of driving drunk rammed his vehicle into the officer’s patrol car. That officer had non-life-threatening injuries.

“This is uncharted territory for us,” Johnson said. “This is going to be a rough couple of days for our organization.”

Johny Colunga, 37, was on the rooftop of The Merc apartments in Bothell with his girlfriend and a couple friends when he heard what sounded like racing cars and saw police lights. He got out a phone and started recording what they thought would be a car chase.

But the fleeing vehicle turned around right in front of them, he said.

“They were shooting out the window at the cop car and then… the cop car got shot at and slowed down and oh my God, it was crazy and they fled the scene,” he said.

His girlfriend saw two scooterists on the roadway and began yelling at them to go inside because there had been a shooting, he said.

Colunga said his girlfriend was shattered by what happened but they were not afraid for themselves and the others on the roof. They grew up in a generation that was taught to prepare for active shooters at school, he said, and they felt it was unlikely the man with the gun would aim the weapon upward.

“I’ve seen the good and bad in all of it and know it can happen anywhere,” he said.

The investigation will be turned over to the Snohomish County Multiple Agency Response Team (SMART), Johnson said.

The news of the officer’s death drew condolences from public officials Monday night and Tuesday morning. Gov. Jay Inslee said in a statement that he and his wife, Trudi, “join Washingtonians in mourning the loss of one of Bothell’s finest… I send the deepest condolences to the family and friends of this public servant who was killed while serving the community.”

Bothell Councilmember Mason Thompson said in a tweet that he was “heartbroken about what’s happening in Bothell tonight.”