In the Pacific Northwest, shrinking glaciers, extreme heat waves, worsening droughts and acidifying oceans are all symptoms of climate change, which is affecting every corner of the globe and intensifying as emissions rise.

That’s according to a blunt assessment of our warming world, which says that it is “unequivocal” that humans are heating up the planet and doing so at a rate not seen in at least 2,000 years.

Many of the stark takeaways in this report — the sixth time researchers have assessed the physical science of climate change for the United Nations’ Intergovernmental Panel on Climate Change — are now familiar.

But the numbers are more specific, the scientists are more confident, and the warnings are even more direct.

The last decade’s global temperatures were likely the hottest it’s been on Earth in 125,000 years. Carbon dioxide emissions were higher in 2019 than at any time in at least 2 million years, the report says.

“Climate change is really widespread and intensifying and many of the changes are unprecedented in thousands of years,” said Kyle Armour, an associate professor and climate scientist at the University of Washington, who served as a lead author on the report. Armour added that climate change was affecting every region on Earth. 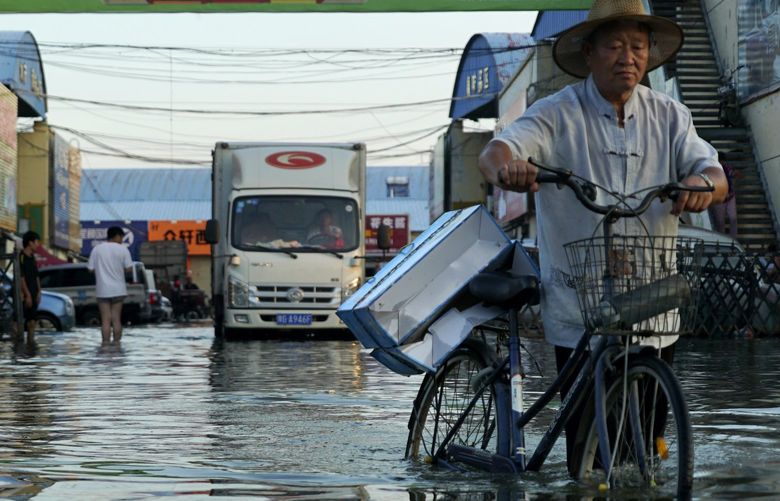 “Humans are responsible for all the warming we’ve seen in the last 100 years,” he said.

Some of climate change’s impacts — such as ocean acidification and surface temperatures — could be blunted or gradually reversed if humanity removes carbon from the atmosphere, the report says, but others, such as rising sea levels, will continue for centuries even if we draw net greenhouse-gas emissions down to zero, the report says.

“There’s so much we are committing to over centuries and millenia that can’t simply be undone and that’s the grim reality,” said Kim Cobb, the director of the global change program at Georgia Tech and a lead author of the report.

The world already has warmed by more than a degree Celsius since the 19th century. In each of the emissions scenarios the scientists considered, global temperatures reached at least 1.5 degrees Celsius higher than preindustrial times, with some projections sending them far higher.

Karin Bumbaco, the assistant state climatologist for Washington, said it was “sobering” to read that heat waves once expected every 50 years were projected to be 14 times more likely if the world warms by 2 degrees Celsius over preindustrial times.

At least 129 Washingtonians suffered heat-related deaths this summer, most of them in the wake of a record-breaking heat wave in late June.

“Heat is still on my mind,” said Bumbaco, who was not part of the IPCC report process.

Bumbaco noted also that the IPCC report authors — with high confidence — projected that marine heat waves, such as the 2015 “blob” that upended marine ecosystems and killed millions of marine animals, would become more frequent.

Fire weather is becoming more frequent in many regions of the world, including across the Western United States.

“The fire season is hotter and it’s also lasting longer,” said Paola Andrea Arias Gómez, an IPCC author and associate professor at School of the Environment at the University of Antioquia in Colombia.

Even if emissions are rapidly reduced, Washington’s shrinking glaciers will show climate change’s effects for decades.

“Even though we could potentially stabilize global climate by reducing emissions rapidly, there are some things in the climate system that are particularly slow to respond,” Armour said. “The glaciers would continue to melt for decades.”

Global seas are projected to rise for centuries, giving coastal communities, including those in Washington, headaches.

“Regardless of how quickly we get our emissions down, we’re likely looking at … about 6 to 12 inches of global average sea-level rise through the middle of the century,” said Bob Kopp, a lead author of the report and a climate scientist at Rutgers University. “But beyond 2050, sea-level projections become increasingly sensitive to the emission choices we are making today.”

For those bracing against climate shifts in their community, the report felt heavy.

“Seeing it in print kind of changes the urgency,” said Alana Quintasket, a Swinomish Indian Tribal Community senator. The Swinomish reservation sits on Fidalgo Island and along Skagit Bay.

Quintasket worries about climate change’s effects on declining salmon essential to tribal life, impacts to an ancient clam garden tribal members are reviving and changes to the reservation’s coastline.

“It’s daunting. I think about it every day. I experience it every day,” Quintasket said. “We have an enormous fight ahead of us. It’s hard to look at it just within our reservation boundaries. It extends beyond that.”

With aggressive action, surface temperatures could rebound faster, though the science suggests it could take decades.

“If we could magically turn off greenhouse-gas emissions tomorrow, we wouldn’t see temperatures fall the next day,” said Guillaume Mauger of UW’s Climate Impacts Group, adding that the report is clear about saying it could take 20 to 30 years to see temperatures fall. “We’re going to have to plan for changes.”

Some good news: Scientists still consider tipping point events that would upend the system and cause massive impacts — such as ice-sheet collapse or an abrupt change to ocean circulation — unlikely. But they also can’t rule out those events entirely, and the higher temperatures rise, the more possible these low-likelihood, high-consequence events become.

Armour said the world should understand by now what must be done. Emissions of heat-trapping gases like carbon dioxide and methane must drop — rapidly, he said.

“Every fraction of a degree matters. There’s no threshold or cliff edge that will take us from everything from being fine to disastrous,” Armour said. “Our future is up to us.”

The report is the first of a package of three slated for release during this cycle of assessments by the IPCC. A second report, to be released in 2022, will assess the human impacts, vulnerabilities and adaptations to climate change. A third report will evaluate ways to reduce greenhouse gases or remove them from the atmosphere.

In creating the physical-science report, scientists summarized much of the research available on global climate change, assessing some over 14,000 scientific papers, said Ko Barrett, the senior adviser for climate for the National Oceanic and Atmospheric Administration’s Office of Oceanic and Atmospheric Research and a vice chair at the IPCC.

Armour, who volunteered his time to work on the report, first met with fellow scientists three years ago, embarking on a “long, grueling process” made more difficult by the coronavirus pandemic. Some 234 authors contributed to the report.

Over the past two weeks, representatives of 195 governments met to review and approve a policy summary of the report, assessing and agreeing to each sentence. The idea is to ensure governments have a common understanding of the crisis and what must be done to stabilize the climate.

Although the physical science of climate change continues to evolve, most of the major question marks now have been addressed to some level. For years, climate scientists wrestled with how changes to cloud cover could affect a warming world that allows more moisture in the air.

Overall, “Clouds have a pretty strong cooling effect on the climate,” Mauger said, mostly because they reflect sunlight away from the Earth’s surface. “On balance, we’re talking about them having a slightly less cooling effect in the future.”

Researchers have also been able to narrow the amount of uncertainty of climate predictions and better understand how sensitive the Earth is to greenhouse gases by improving climate models, using more robust temperature data and relying on clues — such as analyses of stalagmites, ice cores and deep sea sediments — that describe climates thousands or millions of years in the past.

“The uncertainty is decreasing over time and this report shows that,” Mauger said.

Barrett, of NOAA, said the world must reach net zero emissions by 2050 to prevent the worst effects of climate change.

“It is still possible to forestall many of the most dire impacts, but it really requires unprecedented transformational change,” Barrett said. “There is still a pathway forward.”