This is not a proposal for some Fourth of July-gone-berserk rah-rah display of uber-patriotism.

Our national emblem, that majestic symbol of freedom and liberty that appears on every quarter and dollar bill, crowning the Great Seal of the United States — loves garbage. And the garbage eagles are a nuisance.

Up to 200 bald eagles frequent King County’s only landfill, the Cedar Hills Regional Landfill, near Renton, where 2,500 tons of garbage a day are stacked upon a hulking trash mountain the size of 700 football fields. There, eagles and other birds scavenge the refuse of 1.4 million people. They pick up trash and fly away. Sometimes their reach exceeds their grasp; as they flap and soar away from the chaos of the open garbage pit, their quarry slips through their talons. It lands in neighbors’ yards.

“He is a bird of bad moral character,” Benjamin Franklin wrote of the bald eagle; “he does not get his living honestly.”

The county uses Bird Bangers, Screamer Sirens, Whistlers and other types of bird-specific pyrotechnics, shot out of a pistol-launcher or a 12-gauge shotgun, to keep gulls, starlings and crows away from the garbage. Bald eagles, which were once critically endangered, staged a remarkable comeback in the second half of the 20th century after the pesticide DDT was banned, but remain a protected species. So King County has asked the U.S. Fish and Wildlife Service for permission to bother the eagles with the same types of fireworks it uses on other birds. Officials expect to get a permit later this year.

The permit would actually allow the killing of eagles, but, “we have absolutely no desire, intention, or plan to kill any eagles,” Doug Williams, a spokesman for the county Division of Natural Resources and Parks (DNRP) said.

They just want to harass them, keep them away from the landfill. 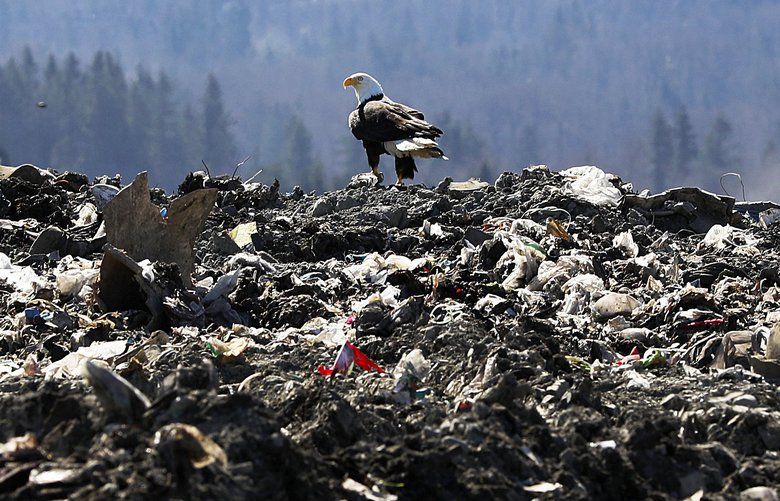 Harassment means, among other things, fireworks, as well as range extenders that allow the fireworks to be shot more than 750 feet.

“Post-harassment, the birds typically gain altitude and circle the attractant until they feel it is safe to return,” DNRP wrote in its application to harass eagles. “This is why once post-harassed birds gain altitude I would like to follow up with the use of CAPA-range extender rockets.”

Last year, the Metropolitan King County Council voted to expand the landfill, extending its trash-dumping life until 2040, despite the pleas of neighbors, for whom the birds (not to mention the trucks, smell and environmental worries) are a blight. In passing the legislation, the council offered a very small olive branch — a new bird management plan to count the birds at the landfill and try to better control them.

The landfill’s closing date has been repeatedly pushed back over the decades, forestalling a decision about what to do with the county’s trash once it fills up.

Twenty years ago, before the county did anything to manage the bird population at the landfill, there were as many as 15,000 gulls feasting on garbage every day. It’s better now, as the landfill uses a heavy-duty tarp to cover the exposed garbage each night, but it remains an issue.

“The eagles deposit this stuff everywhere,” David Vogel, a landfill neighbor, said at a public meeting last year, holding up a zipper-top bag filled with waste he’d found in his yard. “The eagle population has exploded in the last five years, and why? Because they have a free lunch at the dump.”

Justin Dayton pulls his gray Honda CR-V up to the edge of Area 8 at Cedar Hills Regional Landfill, and the hundreds of birds swooping and swarming in the garbage pit below know something is amiss. They’re not bothered in the least by the half-dozen bulldozers with giant toothed metal wheels pushing and compacting the trash around them. But at the sight of Dayton, at least a football field away, a portion of them scatter as soon as he opens the car door. They may be literal birdbrains, but they’re not dumb.

Dayton, a wildlife biologist, works to make that “free lunch” at the landfill a little less appetizing. Last year, the county signed a $95,000 contract with his company, Innovative Wildlife Solutions, to try to manage the garbage birds at the landfill and eight scattered transfer stations.

Dayton activates two remote-control propane air cannons. Each emits a noise somewhere between a loud pop and a modest bang. More birds retreat. Then he pulls what looks like a starter’s pistol from his pocket. He fires a few shots into the air. There are screamers, which sound like a squealing duck and trail a tail of flame. And there are bangers, which end with a small explosion.

By the time he’s fired four, every bird is gone.

Dayton has a whole bag of tricks to make the landfill a less appetizing place for birds.

He’s filled the seams of a retaining wall with pieces of floaty pool noodles, so European starlings (an invasive species) can’t nest in there. He plants dead seagull decoys on top of roofs to scare off their live brethren. He uses a scarecrow, but the birds get wise, so he moves it frequently. And, because the birds know him, the scarecrow looks like him — same height, same neon safety vest and hardhat, even a printed and laminated photo of his face.

The goal is to use exclusively nonlethal methods. But they did kill just over 700 gulls and ravens last year, usually with a shotgun and only after they had stopped responding to all other forms of harassment, Dayton said.

“He tries a lot of stuff,” said Scott Barden, assistant operations manager for King County Solid Waste. “Some of it works well and some of it doesn’t.”

“Birds become acclimated very quickly,” Dayton said. “That’s why you’ve got to constantly mix things up. If it doesn’t constantly move or create a threat, it basically becomes a part of the landscape.”

Dayton has performed similar work at every airport in the area and speaks frequently with colleagues at the airports to see what’s working for them.

Twice a week, he stands in five designated spots at the landfill and for three minutes at each spot counts every bird within sight. The hope is that after a year or so of this, they’ll get some sense as to whether their tactics are working. A sampling, from last Wednesday:  407 European starlings, 255 glaucous-winged gulls, 89 bald eagles, 43 American crows, seven killdeer and seven ravens.

An hour or so after Dayton fired the pyrotechnics, the seagulls were still gone. But the eagles were back. Dozens of them. Swooping at garbage, perching on garbage, clashing over garbage, flying away with garbage.

But Dayton couldn’t do anything. It was only eagles, and he’s not yet allowed to shoot fireworks at eagles. Gotta wait for that permit.