A federal judge in Seattle has found evidence that the Seattle Police Department used excessive force and violated the free-speech rights of thousands of demonstrators, and has issued a temporary restraining order preventing officers from using pepper spray, tear gas, foam-tipped projectiles or any other force against peaceful protesters.

In issuing the order, U.S. District Judge Richard Jones concluded, based on video and other evidence, “that on some occasions the SPD has in fact used less-lethal weapons disproportionately and without provocation.” In instances where looting or vandalism was occurring, the judge said, police should have gone after the offenders, not turned their weapons on the entire crowd, the upshot being that the department deprived everyone who wasn’t breaking the law their constitutional right to gather and protest.

Moreover, the judge said the repeated use of tear gas, pepper-spray and other crowd-control measures by the police likely kept some protesters at home. He concluded that “SPD’s use of less-lethal, crowd control weapons have surely chilled speech.”

And Jones said there was substantial evidence that the SPD’s violent actions against the crowd were in retaliation for the very message that brought the throngs to the streets in the first place: police brutality and racism.

“The use of indiscriminate weapons against all protesters — not just the violent ones — supports the inference that SPD’s actions were substantially motivated by Plaintiff’s protested First Amendment activity,” Jones wrote. “Police cannot interfere with orderly, nonviolent protests because they disagree with the content of the speech.”

The temporary restraining order will remain in effect for two weeks.

The order came in a lawsuit filed against the city and the police department by attorneys for the American Civil Liberties Union of Washington representing Black Lives Matter Seattle-King County and several individuals. A hearing was held on the issue Friday morning and Jones ruled in the afternoon.

Mayor Jenny Durkan’s office issued a statement saying Durkan”believes the Court struck the right balance” in protecting the protesters and maintaining public safety. The statement does not directly address the court findings that the SPD used excessive force and violated the protester’s First Amendment guarantees of assembly and free speech.

It states that Durkan has met with representatives of the Office of Police Accountability, the Community Police Commission, the federal monitor of the SPD, and the city Office of Inspector General to discuss officer accountability and review the department’s crowd control measures, which she points out were approved by the federal judge overseeing the consent decree  that was put in place in 2012 after a Department of Justice investigation — prompted by then-U.S. Attorney Durkan — determined SPD officers routinely used excessive force.

“Seattle can and should lead the way to make changes through our civilian accountability system,” the mayor said in the statement.

Police Chief Carmen Best issued a statement saying the department “supports and will comply with the judge’s order.” The chief noted that she issued an order last weekend restricting the use of CS tear gas, although the department has deployed it at least once since during protests around the East Precinct on Capitol Hill.  Best’s statement did not address the judge’s findings of civil-rights violations, either. 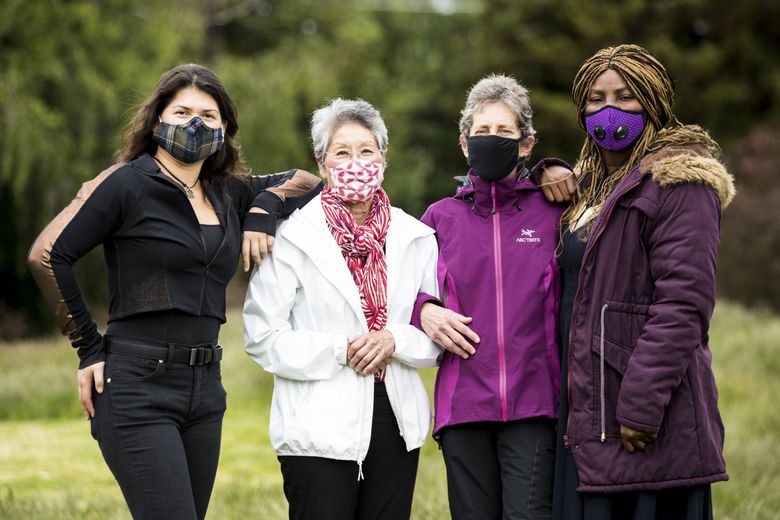 The order was applauded by the free-speech advocates and civil libertarians who sought it.

“The City must allow for freedom of speech and freedom of assembly, and it must address police accountability and excessive use of force,” said Michele Storms, the executive director of the ACLU of Washington. “It is impossible to expect progress if the city continues to attempt to silence protester demands with excessive force.”

“We know what happens when people don’t speak out against government wrongs,” added Robert Chang, a lawyer at the Fred T. Korematsu Center, which had joined in the lawsuit. “This (temporary restraining order) recognizes that it is crucial to our democracy for people to be able to protest without fear of state violence. Maybe then, change will come.”

Judge Jones noted that the “city and nation are at a crisis level” over not just the death of George Floyd, but over “generational claims of racism and police brutality.” He said it is clear that the protests that have rocked America “will be relentless until change and police reform is made” and that the protests will continue. He also wrote that the protesters need the protection of the federal court.

“What brings the parties to this Court today are peaceful protesters desiring to engage in their rights guaranteed by the Constitution, the freedom of assembly without fear of retaliation or disruption by Seattle police officers’ use of tear gas, pepper spray, flash bang devices, or foam-tipped bullets,” the judge wrote.

Jones  said the court was left to balance the First Amendment rights of the thousands of protesters who have crowded downtown streets and now settled in an “autonomous zone” around an abandoned police precinct on Capitol Hill against incidents “when violent offenders choose to disrupt constitutionally protected activity.”

Over the past two weeks, police and the crowds have clashed repeatedly and officers have used concussion grenades, rubber bullets, pepper spray, tear gas and other nonlethal crowd-control weapons to varying degrees of effect. Some in the mostly peaceful protests have vandalized buildings and set fires. A number of police officers have been injured by objects thrown from the crowd, including bricks, frozen water bottles, fireworks and beer cans.