America’s longest war went on for so long that many Americans probably forgot it was there until we tried to quit.

Whatever your views about the 20-year war on terror in Afghanistan — mine is that we should have left at least a decade ago, after they got Osama bin Laden — what matters most now is how we deal with the aftermath.

And here at home, there are signs that the apparent ending of the forever war may already be rekindling an ugly political battle — over refugees, and whether we choose to open our doors to them, or wall ourselves off more to the world. 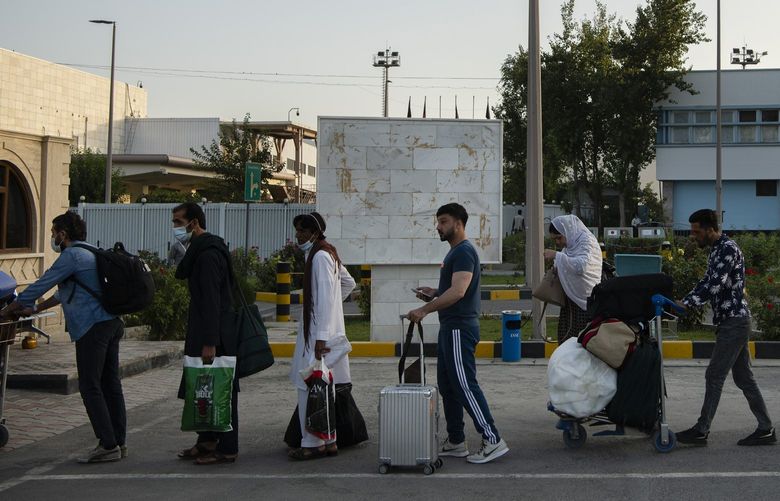 “So first we invade, and then we are invaded,” said Fox News’ Tucker Carlson, framing the Afghan refugee issue in as xenophobic a way as possible.

“Democrats are using the fall of Afghanistan to call for massive new immigration to the USA,” was how Washington state Sen. Doug Ericksen, R-Ferndale, saw it.

Well … what I’ve heard is some Democrats and Republicans alike saying that we owe some humility to the thousands of Afghans who either assisted our troops or are currently fleeing the Taliban. Helping them resettle, including here, seems like the bare minimum we might do after 20 years of occupying their country.

“If you thought 100,000 Americans in Afghanistan was an awful idea (and it was), wait until Biden invites 100,000 Afghanis here,” fumed NewsMax’s Steve Cortes, a self-proclaimed “voice of the deplorables.”

Fortunately, Washington state is as much of an antidote to this virulent sort of fearmongering as any place. Last year, amid overt hostility toward the refugee program from the Trump administration, Washington took in the second-highest number of any state, 1,108, behind only California’s 1,188. (Some Southern states accepted fewer than 10 refugees each.)

In 2020, America admitted the fewest refugees since record-keeping began in 1975, according to State Department figures.

That wall mentality has got to change now, and fast, local aid leaders say.

“We can’t just abandon the same people who helped the troops for 20 years,” said Chitra Hanstad, executive director of World Relief Seattle. “It’s the troops who are the most adamant about that, because they worked with the Afghans for years. I’ve seen them bring congressmen to tears over it.”

It was good to see the strongest call for turning Washington state into a hub for Afghan refugee resettlement came from the two Republican leaders of the state Legislature, Rep. J.T. Wilcox, R-Yelm, and Sen. John Braun, R-Centralia.

“Washington was one of the first states to accept refugees after the fall of Saigon,” the pair wrote on Monday. “We have seen the tremendous generational benefit of welcoming political refugees to our state. … By helping the Afghan people escape the Taliban, we can do more than express our solemn gratitude to our veterans here in Washington state. We can show them that their service was not in vain.”

I’ve said it before and will again now: We are lucky to have moderate GOP leaders like this. It’s part of why Washington remains, for now, somewhat of a harbor in the jingoistic storm. The truly toxic anti-immigrant stuff gets squashed from the top down by both parties here, not just by one.

“The governor is a huge advocate for refugees, so it’s bipartisan here, and it’s also Amazon and Microsoft being very pro-immigrant behind the scenes,” Hanstad said. “It all converges in Washington state. It’s pretty unique.”

World Relief has resettled 91 Afghans in the Puget Sound area since June, mostly through the Special Immigrant Visa program (which was created for Afghans and Iraqis who assisted the U.S. war efforts). She said she’s got three staffers now at Fort Lee in Virginia where thousands of Afghans are being airlifted following the U.S. troop withdrawal.

The main way Seattleites might be of help is by donating housing directly — by volunteering to host an Afghan family, in their home or in a spare unit — or by donating gift cards to be used at local stores, Hanstad said. There’s more info at worldrelief.org/seattle. Other aid groups involved include the International Rescue Committee, which has a Seattle office, and the Lutheran Immigration and Refugee Service.

With the instant collapse of our propped-up government and the mayhem at the Kabul airport, obviously the occupation is ending chaotically. I thought we might see worse, though, such as roadside executions or deadly attacks on U.S. troops. Wars don’t tend to end gracefully.

When America first invaded Afghanistan and then Iraq, the cautionary phrase back then was “if you break it, you own it.” Twenty years on, we maybe aren’t leaving Afghanistan behind completely broken. But through four different administrations, we sure didn’t fix it, either.

Now that we’re bringing the troops home, the path to repair — the only honorable course left, really — has to start with holding a hand out instead.