Overdoses are a part of life in many of today’s homeless encampments. In 2019, the Seattle Fire Department responded to an average of more than two overdoses a day involving homeless people. That’s nearly half of the total overdoses it responded to that year.

But if you overdose in a homeless camp, there is likely someone around who can get help, according to Caleb Banta-Green, a principal research scientist at University of Washington who has studied overdose data in Seattle. In fact, most overdose deaths in Seattle last year were people who weren’t homeless: Homeless deaths only made up one-fifth of all deaths caused by drugs and alcohol in the city, according to the King County Medical Examiner.

“While being homeless is obviously very bad for (your health),” Banta-Green said, “if you are around other people, they can look out for you and help you and get medical aid.”

This week, The Seattle Times and KNKX Public Radio chose to broadcast a sensitive piece of audio illustrating how one overdose played out in a homeless encampment, which was captured in the course of making “Outsiders,” our joint podcast about homelessness in Washington’s capital city, Olympia. It can be heard about 7 minutes into Episode 4 of the podcast series, which you can listen to below.

Will James, a KNKX reporter, was interviewing homeless people a year ago this week when an encampment resident known as Foxx overdosed. James was in the most visible and notorious unsanctioned encampment in downtown Olympia at the time. Two people had died there over the winter of 2019 from medical complications likely related to overdoses, and there was a stabbing there a month before those deaths, though the victim survived.

“It was a place where police were reluctant to go, there was a lot of visible signs of substance abuse and mental illness,” James said.

The tape that James recorded on this particular day shows how one homeless camp came together to save one of its campers.

He was interviewing someone else in the camp when a woman ran up and said someone was overdosing. James, the reporter, called 911. Campers began calling for Narcan, a nasal spray that can block the effects of opioids and interrupt an overdose; Narcan has become an increasingly common thing in Puget Sound encampments. 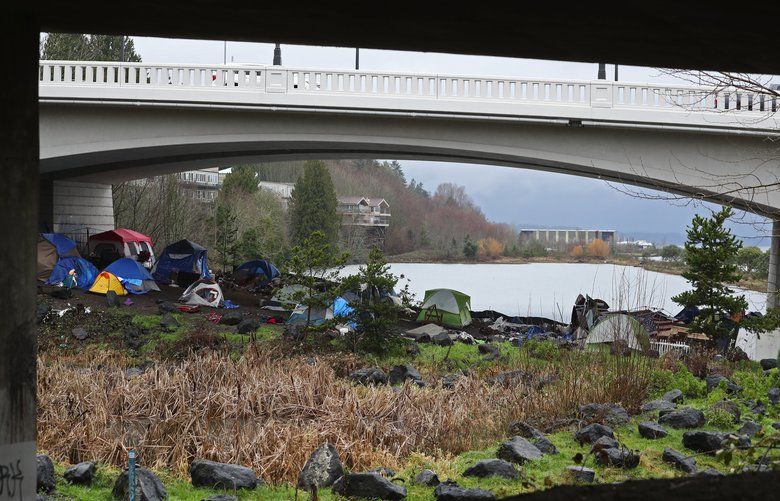 “The entire encampment, it seemed, sprung into action when they saw that this woman was overdosing,” James said. “And there was a small crowd of people around this woman’s tent — some of them attempting CPR, or looking for paramedics to flag down, or yelling instructions, or yelling out the woman’s name, kind of cheering her on to come back to life.”

Amid the shouting and bustling, there was an undercurrent of calm — almost like this was routine.

“You can hear the panic in people’s voices, and you can also tell that it was kind of a controlled panic,” James said. “You can hear people saying to use Narcan, and you can hear other people responding that they’ve already used Narcan, several times, so there’s a sense that you know people were definitely scared, but they also sort of knew what to do.”

“Come on Foxx,” one man, whom James never met, says in the audio of the overdose. “Foxx, wake up. Come on, honey.”

Eventually, after many doses of Narcan, Foxx woke up. The ambulance arrived, but she declined care. She didn’t respond to interview requests for this story, though James did make contact with her after the incident and she was aware he planned to use the audio.

Afterward, James went back to the man he’d been interviewing and asked how often this happens. “Every few days,” he said.

“What I saw happening there, were two of the realities of homelessness playing out at once right in front of me. One was the reality of how homelessness makes death part of your everyday life,” James said. “And also … I think there’s a kind of stereotype that people who are homeless or have substance use disorders — that there’s kind of a nihilism to it, that they don’t care about other people, and they don’t care about themselves. And in this moment, it was obvious that they cared very deeply and didn’t want to see this woman die.”

What happened to Foxx is unknown. Olympia city officials ordered the encampment cleared not long after she overdosed and everyone had to leave.