Every two weeks, on payday, Neal Lampi would take a trip from Sodo down to Puyallup to a dump station to empty the sewage tank of the RV he lives in and go grocery shopping on the way back.

But this summer, Lampi had to leave his job after 11 years. He has chronic obstructive pulmonary disease and other medical complications that make him especially vulnerable to COVID-19 and work was too big a risk.

He no longer had the money to pay for gas to get to Puyallup or dump fees if he got there.

Dealing with human waste is an ever-present issue in Seattle, where thousands of homeless people who live outside have to find a place to relieve themselves. Many people think living in an RV — when everything works — is a better kind of homelessness than sleeping on the street, particularly because you have a toilet in the middle of a pandemic-stricken city where public bathrooms are few and far between.

But Seattle has no public dump sites in the city limits. And many RVs are damaged, don’t run or have sewage tanks with little gray water, so the waste is extra sludgy and hard to pump if the owner can make it to a dump site.

In the five years before the pandemic, the number of wastewater spills from RVs quintupled, rising to 100 in 2019, according to Seattle Public Utilities. Some of these were intentional, but most were by accident, according to Chris Wilkerson, who was on the utility agency’s spill response team.

“It felt powerless, a little bit, to have diagnosed the problem, there’s waste there — it’s getting on the ground and exposing people to risk, getting in the drain,” Wilkerson said, “and knowing that a week later we’re going to be here to clean this up again. It felt like there had to be a better way.”

So Seattle Public Utilities, an agency that normally deals with pipes and sewer grates, did something they’ve never done before: They went after the poop themselves. 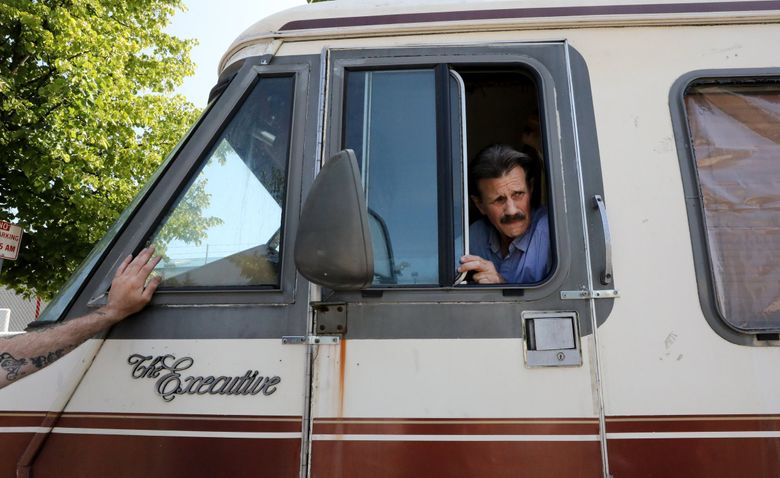 ‘Vehicle ranching’ in Seattle: Inside the underground market of renting RVs to homeless people

That’s essentially Wilkerson, who now roams around Seattle with a local port-a-potty supplier and a pump truck piled with portable toilets, knocking on RV doors and asking if the occupants want their sewage tank pumped. As of last week, they’ve pumped 1,000 tanks since late January. This pilot cost the city $179,000 for the first year and just received another year of funding in the 2021 budget.

It seems to be working: In the first half of 2020, illegal wastewater spills from RVs were cut in half.

“The waste isn’t there to be spilled — we’ve collected it,” Wilkerson said.

Nearly 3,000 people live in vehicles in King County, according to the homeless survey, and of those, hundreds are in RVs and campers scattered around the city.

Lampi originally moved into his RV in 2015 because he was paying off nearly $600 a month in student loans and he couldn’t afford both that and rent on his former salary.

He was visited by Wilkerson and the pump truck on Tuesday, and didn’t have to worry about juggling bills for a moment.

Wilkerson’s is not a glamorous job, and it requires creativity and a willingness to “get down on your hands and knees” and hold your nose. While working on one RV with a malfunctioning electric pump system Tuesday morning — something Wilkerson had never seen before — the owner opened the cap too soon and beige liquid sewage sprayed out. A powerful smell hit them and wafted down the block for hours.

As he worked his way down Third Avenue in Sodo, Wilkerson listed off the unique problems long-term RV living can present:

Sometimes, the gate valves on the outside of the RV are broken and can drip sewage. If that’s been a problem long enough, the tank empties of water and only the solid feces stay behind.

“A brick of [expletive] can form inside their tank,” Wilkerson said, which is arduous to remove, and requires Wilkerson and his contractor to give the RV dweller buckets of water to pour into the toilet.

Sometimes, toilets have been malfunctioning so long that the RV dwellers just switch to buckets as toilets. Fortunately, Wilkerson and the team can service buckets too.

Sometimes, Wilkerson will visit an RV he has serviced before in the same spot but the person who answers the door is new. The turnover means the new resident might not know that the plumbing doesn’t work, or why.

The rest of the time, they canvas the city. It’s been easier to find people since the pandemic hit and Seattle lifted its 72-hour limit on parking on a public street. But as a result, RVs are breaking down. About a quarter of the RVs the team encounters can’t run, often due to batteries that die when owners can’t afford to run them.

This Tuesday in Sodo, Wilkerson was accompanied by a team of volunteers from St. Vincent de Paul, who partner with the pump out team to bring people food, clothes, sleeping bags or sometimes, a tent.

This program isn’t just totally different from what Public Utilities did in the past: It also made staff totally rethink their mission, according to Andrew Lee, deputy director for the drainage and wastewater division at Public Utilities, and realize they’re not meeting their mission when it comes to people living in RVs.

Before, the department was more distanced from customers — workers were used to dealing with pipes in the ground or only interacted with people around complaints.

“We totally take it for granted — the impact that successfully taking and dealing with someone’s sewage, in many ways, can be really transformative,” Lee said. “Imagine spending your day with a filled up sewage tank in your RV — and probably not feeling very good, but feeling what can I do with this?”