Only a handful of hospice programs across the country specifically aim to take care of and house people who have been homeless at the end of their lives.

After her 34-year-old grandson died of an overdose while homeless in 2014, longtime University of California, Davis, School of Medicine professor Marlene von Friederichs-Fitzwater poured herself into researching programs like these. The stories her grandson would tell about the people with cancer or chronic illness surviving outdoors reflected what von Friederichs-Fitzwater was learning from homeless patients in the emergency room and in cancer treatment: There was no place for them to go.

She found just two programs in the United States that had come to care for people with serious illness like those her grandson met on the streets — one in Washington, D.C. that began in the ‘90s as a program for people dying of HIV/AIDS, and another in Salt Lake City.

“We’re the only country in the world, developed country, that didn’t have a kind of more uniform way of dealing with it,” von Friederichs-Fitzwater said.

It’s no different in Seattle, where social workers and nurses do their best to help homeless patients navigate chronic disease and dying without appropriate, long-term places for them to stay.

From the time that loggers and fishermen came to Seattle in droves in search of work, the frontier city struggled to handle the social consequences of the extractive industries it cultivated. Once those laborers became too sick or injured to work, many of them became destitute fixtures of the city’s old Skid Road at the end of their lives, often with disabilities, addictions or severe mental illness.

In some ways, the debate over what this city owes its poorest and most vulnerable people has changed little. Extreme, disabling poverty has existed from the beginning of the city’s settlement days, though never a comprehensive system to care for people suffering from it. 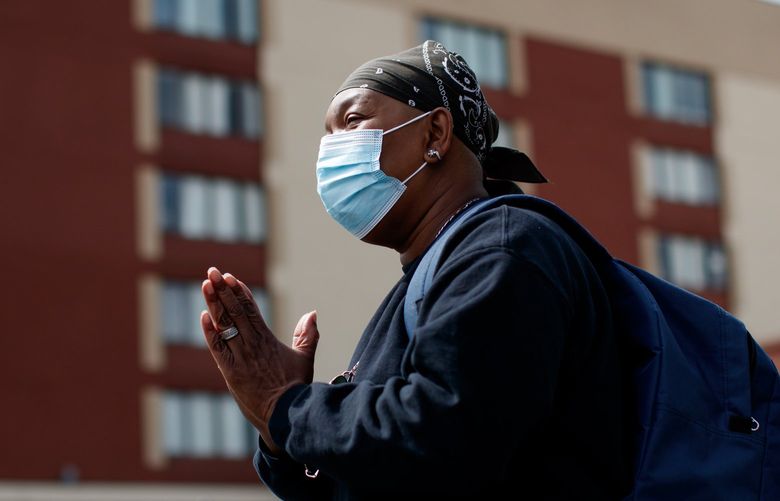 She didn’t want to die homeless. But in Seattle, there were few places to turn.

Here’s the story of one woman’s struggle to find a place to live while fighting terminal cancer.

When early Seattle settlers discovered a 32-year-old, mentally ill sailor with frostbite living on the shore of Elliott Bay in 1854, doctors and civic leaders debated over where to send him — and who should pay for his care — for years. His name was Edward Moore, and he was the city’s first documented case of chronic homelessness.

After two years of shuffling him between territorial settlements and ultimately sending him back to Seattle to fend for himself, officials eventually shipped Moore back to family on the East Coast, where he died of suicide.

Now, more than a hundred years later, multiple crises are merging. The rise of chronic homelessness coupled with a social services system that never recovered from Reagan-era spending cuts is resulting in record numbers of people dying on sidewalks or in shelters poorly equipped to care for people dealing with lifetimes of trauma, premature aging and complex medical needs.

The people dying are young by modern standards: They are in their 50s and 60s — an average of 20 to 30 years short of housed peers.

Josephine Ensign, a professor at the University of Washington School of Nursing who researched and documented Moore’s history in a recent book published about Skid Road, said she became interested in his story because of what it reflected about early territorial legal responsibility for people who are homeless, “as well as people’s moral code in terms of care for people who are ill or injured or homeless or destitute.”

The scrambling and confusion over where to send Moore is a problem that still exists today. Medical respite after a hospitalization is time-limited. Congregate shelter settings are dangerous for people with serious illness. And skilled nursing facilities, which aren’t used to receiving dying people in their 50s, often reject homeless patients because their needs are too great, according to doctors and social workers.

Rahima Jackson, a 51-year-old former home health aide profiled by The Seattle Times, bounced among the hospital, medical respite and shelters for more than a year and a half while receiving treatment for stage 4 cancer in King County. She died a little over a week after moving into the apartment she and her care team finally found.

Medical respite, palliative care programs, residential hospice care and low-income housing all need to be vastly expanded to house and care for homeless people with serious illness, according to Courtney Pladsen, director of clinical and quality improvement at the National Health Care for the Homeless Council.

The homelessness system itself isn’t set up to address the growing problem alone. Because so little low-income housing exists, homeless people are prioritized based on vulnerability. That means that often, people who have become very sick are only finally able to access housing at the end of their lives and die soon after, Pladsen said.

“We choose the sickest to put into housing and we disconnect them from the central service connections for people receiving care,” Pladsen said.

It’s something Ensign has seen with her patients, too. After a lifetime of adrenaline-based survival, “people talk about feeling safe enough to let go,” Ensign said. “Even the day they move in they die.”

In California, von Friederichs-Fitzwater wants to create one part of the solution: a place for people without housing to receive care and work on their life goals in safety as they approach death.

Von Friederichs-Fitzwater started interviewing homeless men and women in Sacramento, where she lived. She learned about the cycle in and out of the emergency room for homeless people dealing with cancer, or chronic obstructive pulmonary disease, or late-stage kidney disease, after which they’d be discharged to the street. In one survey of 167 people, she asked what their greatest fear was.

The most common answer, she said, was dying on the street, forgotten.

Soon, von Friederichs-Fitzwater began meeting with Sacramento City Council members and the mayor, and pressed them on the need for a permanent place for homeless people with terminal illness to live. She met with four local health care systems and brought them in as partners. She won grants and donations for her vision for that place.

She’d call it Joshua’s House, after her grandson.

In her conversations with politicians, von Friederichs-Fitzwater recounted, some were surprised to learn that there wasn’t a place for homeless people to go to die. They just assumed people went, well, somewhere.

But in the years and trials that it’s taken von Friederichs-Fitzwater to get her project off the ground, it’s become clear to her that America isn’t designed to support places like Joshua’s House.

“We don’t live in a society that’s geared to provide care like that,” von Friederichs-Fitzwater said. “If you’re not productive, in this society you don’t have a lot of value.”

The project aims to open in June.

Sydney Brownstone: 206-464-3225 or sbrownstone@seattletimes.com; on Twitter: @sydbrownstone.
The Seattle Times closes comments on particularly sensitive stories. If you would like to share your thoughts or experiences in relation to this story, please email the reporter or submit a letter to be considered for publication in our Opinion section. You can read more about our community policies here.
Advertising