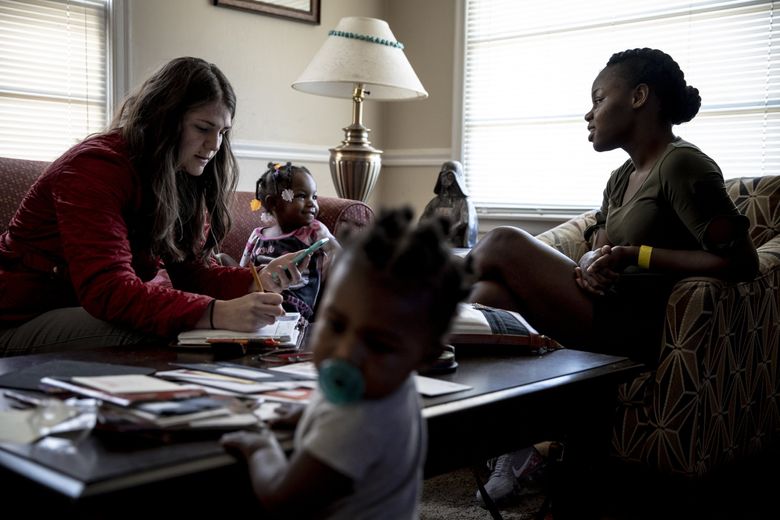 Cindy Walker writes down phone numbers of apartments for Terrineka Maxwell, right, to check out. On the sofa is Maxwell’s niece Kiya, 1. Her son, Chase, 10 months, is standing. (Andrea Morales for The Seattle Times)

More than a third of Washington's foster kids become homeless after leaving care. But in Tennessee, there's a possible solution, and Washington is looking at copying it.

MEMPHIS, Tennessee — Terrineka Maxwell is only 19, but she’s already had a lot of people come in and out of her life: 20 foster families since she was taken from her mom at 2, and at least seven caseworkers in the past seven years.

But her newest caseworker, Cindy Walker, is supposed to be different. Unlike most previous caseworkers, whose job was to help Maxwell grow up healthy and safe, Walker’s job is to help Maxwell, who’s now a young mom with a 10-month-old, launch into adulthood.

On a recent morning when Walker picked up Maxwell for a trip to a food bank, Maxwell had left her infant car seat in her brother’s car, and Walker — who’s also a mom — didn’t have hers. If Walker had been one of the other caseworkers, she might have fixed it herself. Instead she looked to Maxwell to figure it out.

As Maxwell went to ask a friend to watch her baby, Walker shrugged.

“This is adulting,” Walker said. “We all come from a place where, if you’re struggling, you ask your family for help. Well, her mom’s in jail, and we don’t know where Dad is.”

This is a small moment, but it is part of a big strategy to reduce youth homelessness. Across the country, young people who get too old for foster care fall into homelessness at appalling rates. Tennessee has found success by spending more on caseworkers, who can then spend more time helping them get jobs, apply for school and learn how to keep an apartment.

Tennessee’s effort has some of the clearest evidence of success in the country, and without providing housing. Former foster kids in this program make more money, have better mental health and are less likely to be homeless, according to research.

It’s been successful enough that in Washington state, lawmakers — focused this session on homelessness — are considering copying Tennessee’s model and expanding it beyond a small, privately funded pilot project in King County.

Lawmakers have long been aware of the foster-care-to-homelessness pipeline: More than a third of foster kids in Washington become homeless within a year of aging out of the system at age 18, a 2013 state report said. Last year, 355 kids turned 18 while in foster care in Washington.

In King County, foster kids become a sizable chunk of the homeless population. In a survey last year, 17 percent of homeless people said they’d been in foster care, and 2 percent said they were in a foster home right before becoming homeless.

The Tennessee model that Washington is considering, called YVLifeSet, focuses on one of the most key relationships in social services: a person and their caseworker. Walker has only eight to 10 young adults in her caseload, allowing her to meet Maxwell every week for hours, and sometimes twice a week, in a role that looks like a highly involved parent.

In contrast, the average caseload for a child-welfare worker in Washington is 19 kids; the Child Welfare League of America recommends 12 to 15.

Dr. Mark Courtney, a nationally regarded social-services professor at the University of Chicago, concluded Tennessee’s approach is the only one he has studied that reduces homelessness among former foster kids without including housing as part of the program. And it usually achieves success in just seven to 12 months.

“It does raise the question — how does it do that?” Courtney said. “It’s helping them problem-solve with respect to their housing.”

This program could model how to teach someone to move beyond homelessness on their own.

Until recently, Tennessee wouldn’t be considered a model for foster care. In 1999, a children’s advocacy group sued the state for failing kids. Some 2,000 children had each been placed with 10 or more foster families, and when they became adults they received little support. In 2001, the state settled with a promise to reboot its management and training.

It was in this environment that Patrick Lawler, CEO of Youth Villages, came to the state capital talking about a program for foster youth who were becoming adults.

Lawler saw the foster-care system up close, working during college at juvenile court in Memphis. The prevailing philosophy at the time Lawler started was “command and control.” Kids in state custody had a lot of structure so they wouldn’t get into trouble, and when they became adults — “they’re gone, we’ve done our job,” Lawler said.

Lawler created the nonprofit Youth Villages in 1986, but it wasn’t until years later when he had his real wake-up call: Data showed youths leaving his programs did poorly in the real world, ending up in jail and on the streets.

“We believed the longer a young person stayed in our program, the better the outcomes would be — it was exactly the opposite,” Lawler says. “The longer they stayed, the worse the outcomes were.”

He realized kids couldn’t just go from being dependent on the state to independent, with no one to help their transition.

With money from a Mississippi philanthropist, the approach that became YVLifeSet was born. State funding came in 2007; the first client the state referred was a 19-year-old woman who’d already had two sets of twins and another child on the way.

“LifeSet — they really come through,” Leach said. “Our young people have had more success with them on board.”

In the meantime, Lawler built Youth Villages into a national nonprofit, with a presence in 16 states, accolades from Harvard Business School and President Obama’s White House, and hundreds of millions in revenue a year. This year, Louisiana and Washington, D.C., are starting up teams of child-welfare workers who use the YVLifeSet model.

Walker and Maxwell drive past Memphis East High School, one of 11 schools Maxwell has gone to. At her senior prom there, a local TV station did a feel-good story on her, the foster kid in the bright pink dress. At the time, things were looking up. Maxwell was headed to college and study early childhood development. She had a boyfriend and a family to stay with. She exited the Youth Villages program.

That was two years ago. She got pregnant in college, struggled with her classes, and her computer was stolen. In March of last year, struggling to find a place to stay, she came back and asked to be readmitted to the program.

In the eyes of her and her caseworker, Maxwell has a big heart and bad friends. She’s been kicked out of apartments because she let friends who brought marijuana crash there, or invited an abusive boyfriend back into her life. She’s currently facing criminal charges for pepper-spraying her ex.

Maxwell doesn’t always feel like Walker gets what she’s going through, despite the caseworker’s best efforts.

“You can sit and listen to every kid on your caseload, but you’ll never really understand ’til you’ve been in that position,” Maxwell said.

To put herself in Maxwell’s shoes, Walker remembers some of her own misguided choices when she was a freshman at the University of North Dakota, and imagines what would have happened if she hadn’t had anybody to guide her.

But it’s hard to divert foster kids from homelessness. Washington allows foster kids to stay in foster families past age 18, but research by Courtney and his colleagues shows that just delays homelessness.

“You can’t respond to homelessness with only housing,” Patrick Lawler says. “Certainly giving a person housing puts a roof over their heads, but we have to focus on more than just the roof. We have to focus on helping that young person live to their full potential.”

The Youth Villages model relies on persuading state legislatures to match philanthropic contributions, but that has not worked yet in Washington. Billionaires Steve and Connie Ballmer paid for a pilot project run by King County’s Accelerator YMCA, with a team of four specialists and a supervisor formed to prove to lawmakers that the model can work here.

In the past two years they’ve served over 100 young people, around three-quarters of whom now have stable housing and are enrolled in education or are employed. Almost 90 percent had no involvement with the criminal-justice system while in the program.

While this model has been shown to work, Washington lawmakers will need to be convinced it’s cost-effective. In Tennessee, Courtney’s study concluded the program cost almost $12,000 per participant. The savings are harder to calculate. A young person could go on to become chronically homeless, racking up hospital bills and court costs, but researchers don’t know if that would happen with or without this program.

Funding for more teams statewide was dropped from the proposed 2017 Washington state budget when the Washington State Institute on Public Policy (WSIPP), the Legislature’s in-house think tank, concluded it didn’t have a measurable return on investment. In fact, taxpayers would be losing almost $14,000 per young adult, according to the analysis, leading lawmakers to back away from the proposal and return to it this year.

But Marna Miller, a senior researcher with WSIPP, said one reason for the negative finding was that there was no standard way to measure the future costs of a foster kid becoming homeless.

Youth Villages has commissioned a study by the RAND Corporation to do another cost-benefit analysis. A preliminary version of that study shows a positive bottom line of about $1,000 per young adult for a baseline case. Washington Gov. Jay Inslee has included $1.3 million to expand YVLifeSet in his proposed 2019-21 budget.

This investment in better case management is one reason Washington state legislators like Sen. Reuven Carlyle, D-Seattle, are considering it.

“Anytime you have small caseloads and highly-trained qualified people,” Carlyle said, “then you’re likely to have success, and it’s likely to cost a lot of money.”

In the weeks after, real life would strike again. Maxwell wouldn’t get the apartment or the job; her ex-boyfriend would show up; she would lose her rented room. Walker jumped in and helped her get another apartment. This one was better: The owner gave Maxwell a second job, at a hot-wings restaurant she owns. Things are stable again, for now.

For kids who’ve had nobody to depend on, it can be hard to get to a happy ending — and sometimes, having a job and a stable place to live for just a bit is the closest someone can get.

“That’s what I keep worrying about,” Walker said. “That we’ll only be able to house her and then can’t work on the bigger things before the program ends.”

Update: In an earlier version of this story, Patrick Lawler’s title was incorrect. He is the CEO of Youth Villages.