González’s plan — like her opponent Bruce Harrell’s, released earlier this month — is big on goals and light on details and deadlines.

She did take a few swipes at Harrell, especially his idea for creating a dashboard to track metrics and vow to adopt the principles of Compassion Seattle, a ballot measure that was deemed illegal by a county superior court judge and will not appear on November’s ballot. 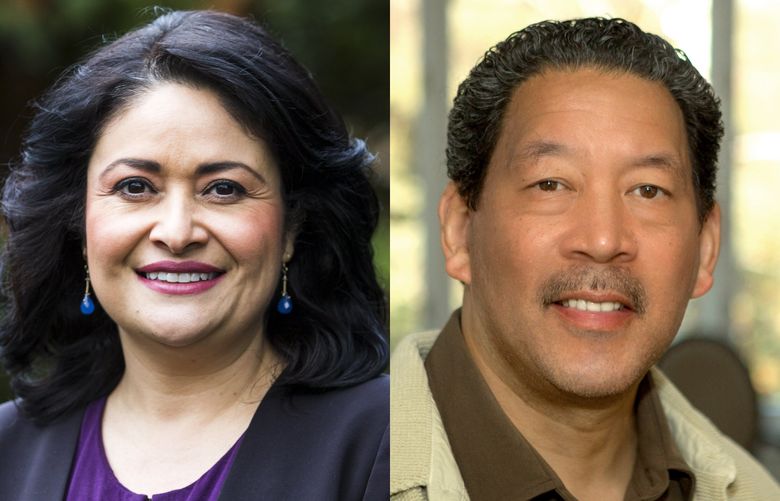 “I am not here to point fingers at people in tents, or call for yet another study, dashboard or app to study an issue that so many of us are all too familiar with,” González said. “Rather, I am starting now to bring all hands on deck to implement solutions for unhoused neighbors that start the moment I become mayor.”

González also wants to do more to limit rent hikes and get rid of exclusionary zoning in the city.

Harrell’s plan, which he announced weeks ago in a park in North Seattle where neighbors have complained loudly about a large homeless encampment, also features more housing and shelter, and includes a capital campaign to fundraise from big companies rather than tax them. He also wants to clear parks of homeless encampments, though his plan focuses on offers of shelter from outreach workers rather than police enforcement.

González said under her administration, there will be no coercive removals of homeless encampments.

“I am not as mayor going to forcibly remove people out of one public space and shift the issue to another public space,” González said.

As for outreach and offers of shelter, she didn’t say specifically what she would do different than the current administration, but said there are not enough city-funded “system navigators” to help with assessing people for shelter.

The race is likely to be close; incumbent mayor Jenny Durkan isn’t running for reelection and González finished the primary just two percentage points behind Harrell. But the two top candidates are similar in many ways: Both are former lawyers who served for years on the City Council as council president, voted mostly the same way, and were unable to do much to alleviate Seattle’s homelessness, which is third-highest in the nation.

González criticized Harrell when asked about what differentiates her: She called Harrell’s plan to create 2,000 units of shelter “false promises,” pointing out that though she and the City Council have funded that many units this year the city hasn’t been able to stand up even half of them yet.

Harrell said via a spokesperson that the approach González offered was “status quo.”

“People are suffering for lack of action in City Hall,” an email from the spokesperson said. “Sound bites and vague promises of new revenue will not help people get housing and support right now, and will not make parks and sidewalks safe and welcoming for all the people of Seattle.”

González has picked up endorsements from influential names in homelessness policy, such as former Housing and Urban Development Secretary Julián Castro and state Rep. Nicole Macri, D-Seattle, who spoke at the event and is deputy director at one of the city’s biggest shelter and housing providers.

“In my time, I’ve seen no shortage of homelessness and affordable housing plans,” Macri said at the news conference. “What gives me confidence now is this: Lorena has the track record of working with broad coalitions to lead on addressing homelessness. She’s consistently stood with and listened to the people most impacted by our city policy.”

Harrell and González will face off in a debate on homelessness hosted by The Seattle Times and funders coalition We Are In next Wednesday, Sept. 29. Register online at st.news/2021Debates.