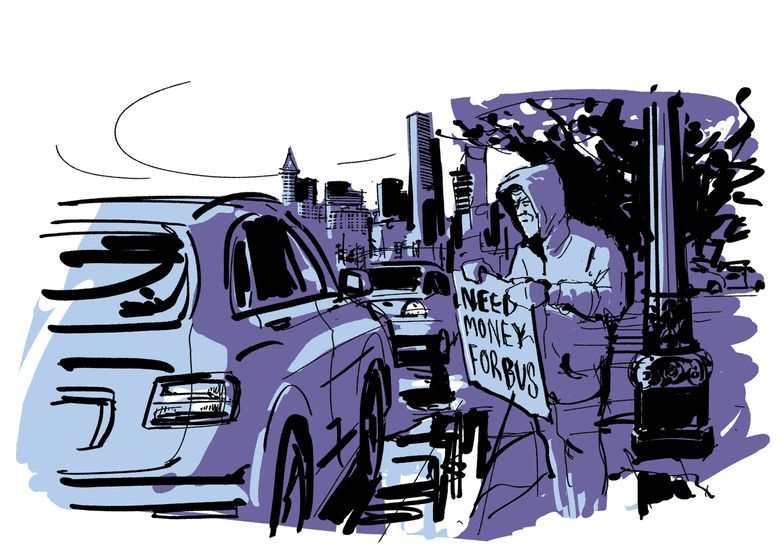 For decades, Seattleites have wondered whether the city is a magnet for homeless people. We tried to answer that question.

Hope Cole-Turner heard it through the grapevine: If she took her kids to a tent city in Seattle, they would get help. At least, that’s what her ex-husband heard at a job fair in Seattle.

Cole-Turner and her kids had been couch-surfing for two years in Oklahoma. She struggled to get work in her hometown because of a criminal conviction, and felt out of place as a liberal in a conservative state.

So she took all the money she had, flew her three kids to Seattle and showed up at a Nickelsville tent camp in West Seattle. After three nights, YWCA found them and put them up in a hotel for six weeks.

“From the first person we met,” Cole-Turner said, “we were treated wonderfully, and with dignity, and we weren’t shamed for asking for help.”

Five years later, she’s made a life in Seattle. She’s an office assistant for an orthodontist, lives in an apartment in North Seattle, and her two older daughters are living on their own.

But Cole-Turner’s story illustrates a common fear: People come to Seattle for a hand up they might not get in other parts of the country.

Does that happen often? People all over the world have believed for centuries that it does. England’s Henry VII passed a law in 1495 that beggars who couldn’t work were forced to go back to the place where they last lived or were born, and couldn’t beg outside that area. President Richard Nixon said in a 1969 speech that cash welfare programs “helped draw millions into the slums of our cities.”

A Seattle homelessness task force in 1985 under then-Mayor Charlie Royer wrote, “The City’s size, mild climate, the relative tolerance of our population and laws and the perception that it is a center of opportunity contribute to its ‘magnet effect.’ ”

It’s not just a question in Seattle. Samantha Green works for Applied Survey Research, which has conducted annual point-in-time counts of homelessness in King County as well as San Francisco, Palo Alto and Oakland in California. In every city she works with, people ask this question.

“I haven’t met a single community where people don’t say, ‘People are coming here from other places,’ ” Green said. Other researchers and leaders in the field told The Seattle Times the same thing.

As Seattle’s homeless population has grown exponentially, the question has become more popular. When Project Homeless asked for questions about homelessness, more than 1,300 people voted for us to answer this question: “What percentage of the current Seattle homeless population is actually from the city of Seattle?”

What the data say

When homeless advocates or shelter providers are asked this question, they often downplay the idea as a “magnet myth.” But there’s evidence that some homeless people come to Seattle and King County looking for help. In a survey conducted during the point-in-time count this year, about 3 percent of the more than 800 homeless people surveyed said they came to King County to access homeless services or benefits. This number could be low, as the survey doesn’t ask people who have been in King County a few years why they originally came here.

The survey also asked, “Where were you living at the time you most recently became homeless?” Answer: 83 percent of people said they were in King County; 5.6 percent said out of state, and the rest said from a different county in Washington, the most common answer being Pierce County.

This survey isn’t a rigorous academic study and relies on self-reported information. In fact, some of King County’s own data show different numbers. When someone comes to a shelter or homeless-service provider in King County, staff ask them a similar question: “In what ZIP code did you last have housing?”

Around 64 percent of the people captured in that data, called the Homeless Management Information System, said they last had housing in King County (much lower than in the survey) and almost a quarter last had housing in some other county in Washington (much higher). The number who said they were last housed out of state was similar to the survey, at 5 percent.

But this database, too, has faults: 16 percent of people entering the system didn’t report their last ZIP code or didn’t know, and another 6 percent were entered incorrectly in the database.

To really answer the question of how many people come from elsewhere, the survey would have to ask everyone — even people who said they’ve had housing in King County — why they originally came to the area.

And local governments and service providers don’t see that question as “politically correct enough to prioritize,” according to Dr. Michael Ullman, volunteer coordinator of the grassroots National Homeless Information Project. However, Ullman doesn’t think the question is very important for fixing homelessness.

Still, academics The Seattle Times spoke to agreed the survey is the best available picture of the population, and the numbers of who last had housing outside the county stay pretty consistent — usually 15 to 20 percent — across the nation, according to Dennis Culhane, a University of Pennsylvania professor and former director of research at the National Center on Homelessness among Veterans.

Other West Coast cities see similar numbers, even when their surveys are conducted by universities. Some of these cities ask this question differently and get different answers. Santa Clara County, home of Palo Alto, asks homeless people how long they’ve lived in the county — not how long they lived there before becoming homeless, as King County does. The Santa Clara survey found more than 60 percent had lived there 10 years or more and five percent had lived in the county for less than one year.

What other research says

Studies have shown that people do migrate for shelter and help; studies have found there are small chunks of the homeless population in New York City, Philadelphia and Vancouver, B.C., who came from elsewhere.

Vancouver’s Downtown Eastside has been pinned particularly as a magnet, with a heavy concentration of homeless people, shelters and services, as well as the only safe-injection site in North America, where people can use drugs without being arrested. Julian Somers and his team at Simon Fraser University talked to nearly 500 homeless people with serious mental illness in the Downtown Eastside for a study released in 2016.

Somers’ team found that only 20 percent of the surveyed people had been living in or near the neighborhood 10 years earlier. The rest came from outside the city limits or outside the province. But there are two sides to that equation, Somers said — there might be a pull, but there’s also probably a push.

“The magnet is, ‘Okay, I’m going to go to this place where I’ve heard I’m not going to be hassled by cops and there’s access to dope,’ or whatever,” Somers said. “There’s a magnet effect and there’s a propulsion effect. And the propulsion effect is wherever they started, they’re feeling pressure to get out.”

But these people in Somers’ study usually migrated from nearby cities and provinces, and the number of homeless people who migrate from even farther isn’t that large. It’s probably around 15 percent, according to a study of more than 100,000 homeless veterans from the U.S. Department of Veterans Affairs’ National Center on Homelessness Among Veterans. It followed veterans’ migrations from 2011 to 2014, noting where their names showed up in different V.A. service networks across the country. It found around 15 percent moved into a new service network (which generally cover two to three states) in those years.

“This is hobo-type migration, across states, across hundreds of miles,” said Stephen Metraux, the lead on this study. “If you’re talking migration from suburbs to cities, that’s a different dynamic.”

More importantly, most cities didn’t gain very many homeless veterans in those three years, because the number of people migrating out was often almost as high as the number coming in. Between vets migrating in and out, Seattle gained about 0.4 percent, which was lower than the average during this period.

There’s no reason this shouldn’t be true for the greater homeless population, said Culhane, the Pennsylvania professor. “We don’t have a lot of evidence vets are much different than anyone else,” he said.

To sum it up: There are homeless people who migrate — somewhere around 15 to 20 percent of all homeless people — but there aren’t many who migrate far beyond their home state and region. While research hasn’t definitively answered the question of how many homeless people migrate just to get help, we know that in King County, 3 percent said they did.

There is scant evidence to show that Seattle and King County’s homeless population has exploded primarily because lots of people came from outside the state. There is some evidence that a big chunk — almost a third — lived in King County for less than five years before they were homeless, and around a quarter say they were born or grew up here.

A previous version of this story incorrectly stated Dennis Culhane’s position. He is no longer director of research at the VA National Center on Homelessness among Veterans.

This story has been updated.