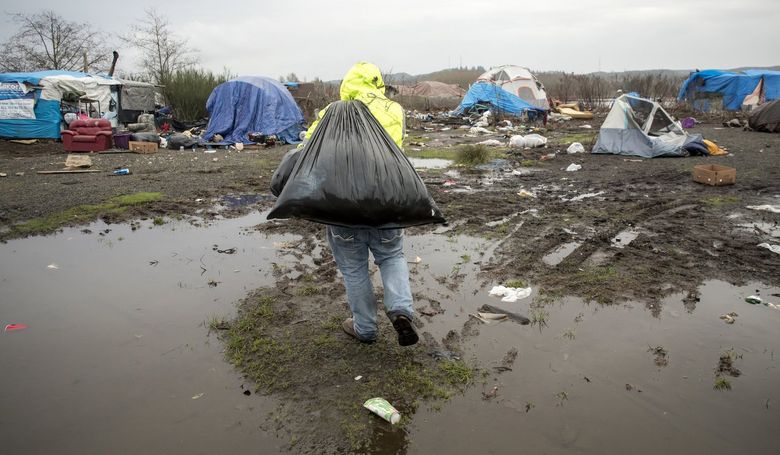 Levi Hunt, a former resident of the riverfront camp, brings donated clothes and socks to residents. “I like to give back what was so freely given to me,” he said. (Bettina Hansen / The Seattle Times)

As a priest takes the city to court, a young mayor tries to figure out how to deal with a sprawling longtime homeless camp on the riverfront.

ABERDEEN — People in Aberdeen have called it “Hobo Beach” for decades. Over a hundred people call this strip of beach on the Chehalis River home — although lately, with fences on either side, and gates that only city employees can open, some living there say it feels like a concentration camp.

Some people in Grays Harbor County call it “Larsonville,” after Aberdeen’s mayor Erik Larson, who led the city to buy the property in August.

And last week, a federal judge called it “a jail” — or at least said that it was being run like one, because of how the mayor and the city were restricting access.

But to Rev. Sarah Monroe, an Episcopal priest who got the courts involved, it’s the place you go in Aberdeen when you’ve got nowhere else.

Last month, Monroe took the city to court when it denied her application to visit the property, setting off an unusual legal case pitting the priest’s First Amendment rights against the mayor’s mandate to protect the city’s health and safety.

The battle around the camp in this city of nearly 16,500 residents is similar to fights playing out in towns and cities across Washington, where activists or business owners are trying to limit what mayors and local leaders can do about homeless camps. In September, two homeless people sued the city of Puyallup for destroying their property during a sweep; this month, business owners in Olympia took the city to court to stop people from moving into a sanctioned camp downtown just hours after it opened; and Seattle is currently embroiled in lawsuits from homeless people who had their camps swept or cars towed, and from critics saying the city’s sanctioned camps break the law.

Washington has one of the fastest-growing economies in the country, but last year, it also had the biggest statewide increase in the number of homeless people west of Texas. Cities around Washington are trying to tap into the sizzling economy, but as they do, they have to figure out how to deal with the growing number of people being left behind.

In this way, Aberdeen isn’t different. But how the mayor chose to deal with Aberdeen’s largest camp — not by cleaning it up and moving campers out, but by persuading the city to buy the land it sat on, requiring all living there to get permits in order to remain, and putting up gates in the hopes of keeping out drug dealers — is uncommon, and it has complicated the question of what lengths cities can go to regulate homeless camps.

To get to the camp on a recent morning, Monroe walked around a large locked gate meant to keep cars out and trudged a quarter-mile or so along a wet gravel road. She wore a flannel shirt and hoodie over her priest’s collar to keep out the December chill.

Monroe passed a small group of people — some of them former camp residents — passing out food outside the camp because they didn’t have permits to enter. Since all of this has happened, donations from Aberdonians have increased, but lugging them to the camp takes time.

“There’s a feeling that if we get the ugly people out of the way, our town would be fine,” Monroe said. “People in general are caring — the city is not.”

Even a century ago, when Aberdeen was the “lumber capital of the world,” people were camping on the river banks. Known then as “river rats,” they were between jobs or down on their luck, said Dee Anne Shaw, a city council member and former editor of Aberdeen’s Daily World newspaper.

Today, anyone driving into downtown Aberdeen can see the camp as they cross the Chehalis River on the Highway 101 Bridge.  It’s grown over the years as tents, RVs and makeshift shacks have sprouted up along a thick cluster of railroad tracks.

Across Grays Harbor County, the number of people counted as “unsheltered” — sleeping in tents, vehicles or the street — is more than double what it was at the peak of the Great Recession. Almost one in five Aberdonians lives in poverty, and one in 16 is homeless, according to data from the state Department of Social and Health Services. Jobs are hard to find — the county has higher unemployment than any county of its size in Washington — and there’s little cheap housing stock. The county has some shelters and dedicated apartments, but most local programs focus on rental vouchers, which require finding a place that will agree to rent.

On the day of Monroe’s visit, campers were fixing their lean-tos and patching their tarps. A storm the previous evening had hit the camp hard. Many people told Monroe that all their clothes were soaked. She told them someone would come later in the day with dry ones.

Monroe and the mayor, who toured this camp in September are similar in a lot of ways. They both grew up around here, they both left like so many do, and they both felt called to return and try to improve things.

Larson ran for mayor in 2015 hoping to revitalize the community. Elected at age 23 — one of the youngest mayors in the country — Larson was not long out of college with a civil engineering degree, so he approached the problem like a civil engineer. He created a low-interest loan program for businesses to renovate their buildings. He’s close to finalizing the construction of a levee to lower flood insurance rates and entice developers to build. In 2017, for the first time in 70 years, a local brewery opened up downtown, followed by another this year.

“If you go into downtown Aberdeen tonight, you’ll have a hard time finding a parking spot,” Larson said proudly. “We have a community feel that we really lacked five or six years ago.”

But with more businesses comes pressure to hide what’s not good for business. The mayor and the Aberdeen City Council have pushed to close cheap motels they said were magnets for illegal activity, and passed an ordinance banning sitting or lying on sidewalks in much of downtown. This summer, Larson announced the city was going to clean out the riverfront.

Clearing out the camp

Hobo Beach’s “hobo” days are long gone. Many of the people living there are from the Grays Harbor area or coastal tribal communities stretching from the Quileute to the Quinault Nations, and some have been there for years. Some say they were forced to come to the riverfront after the rundown motels they lived in were shuttered, or they could no longer sleep downtown because of the ordinance.

The city occasionally swept homeless people from the property in the past when it was privately owned. But every time, campers kept coming back. Then in May, a woman crossing the tracks was run over by a train, losing both her legs.  Larson and the city council figured if they bought the property, they could at least try to keep campers safer and scare away drug dealers until they could permanently clear the camp. After the city agreed to pay $295,000 to buy the 8-acre property, some around town started calling it Larsonville.

But the city’s intentions raised the ire of Monroe and a burgeoning alliance of progressive housing activists, who decided to hold a vigil to push for more affordable housing and protest the sit-lie ordinance. In June, they brought the famous Michael Curry, presiding bishop of the Episcopal Church — fresh off his speech at the U.K. royal wedding — to Aberdeen to rally at City Hall and tour the riverfront camp.

But the decision the mayor faces about Larsonville is all too serious. He could evict all of the campers tomorrow, the federal judge said when Monroe took Larson to court — but removing over a hundred campers would stretch the city’s police force, which the chief said already has its hands full. And even if he could, Larson doesn’t feel it’s humanitarian.

The mayor is also thinking of mayors and cities — from Puyallup to Seattle — taken to court for responding too weakly or too harshly to homelessness. With his options few, to Larson — and certainly to other small-town leaders in Washington — facing a gigantic social problem with a small-town budget feels like trying to sweep back the tide with a broom.