Democrats in the U.S. Senate, led, in part, by Sen. Patty Murray of Washington, have drawn up a road map for how to implement broad COVID-19 testing across the nation.

Without widespread testing, it’s impossible to fully comprehend how widely the virus has spread. But tests have been hard to come by for many Americans as the materials needed for it have been in short supply, and in some areas, only people meeting certain criteria can get tested. Testing has been riddled with problems from the start, when the U.S. Centers for Disease Control and Prevention botched a nationwide rollout of test kits to public-health labs.

The lack of a federal strategy to extensively test and support public-health infrastructure will make it impossible to safely ease social distancing and stay-home orders, Murray said.

“We need testing to be fast, free and everywhere,” Murray said during a telephone news briefing with other Democratic senators on Wednesday, 12 weeks after a Snohomish County man was the first person in the United States to test positive for COVID-19.

Widespread testing would save lives and allow Americans to get back to work,  Sen. Debbie Stabenow, D-Mich., said. 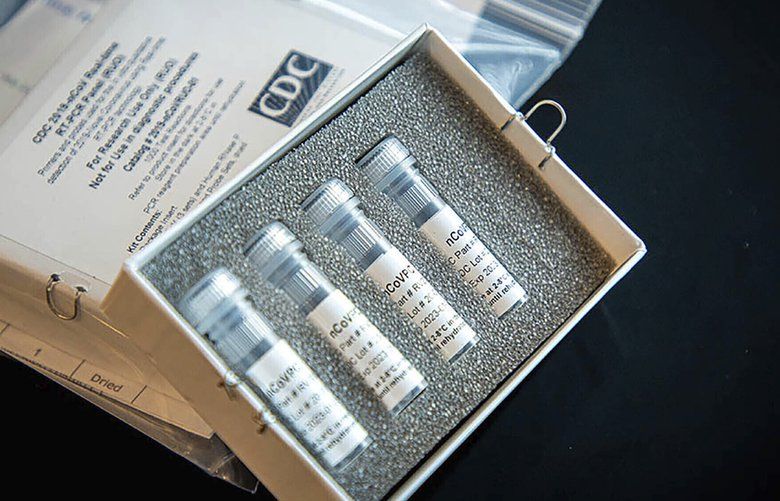 The lost month: How a failure to test blinded the U.S. to COVID-19

The senators are pushing for the next round of congressional spending for the pandemic response to include $30 billion in emergency funding to quickly make testing available nationwide. The road map they propose to make that happen includes:

“Until a vaccine or an effective therapeutic is developed and widely available, the best way we can assess the potential readiness of the country to restart major economic activity is through comprehensive, widespread, sophisticated testing,” Senate Minority Leader Chuck Schumer, D-N.Y., said on the Wednesday conference call.

The proposal won’t be considered by the Senate until Congress reconvenes May 4. It would need bipartisan support, Schumer acknowledged.

The Democratic senators’ push for a federally directed testing strategy comes as more Americans are diagnosed with COVID-19 every day, yet fewer tests are being processed. The number of tests analyzed daily by commercial labs in the United States dropped by more than 30% during the past two weeks, Politico reported Monday.

The Trump administration has, at various times  during the past month, said states, not the federal government, should be responsible for expanding testing and acquiring personal protective equipment for health care workers.

Limited early testing allowed the virus to spread undetected in Washington, and problems persisted as the state tried to play catch-up. However, testing availability has expanded statewide in recent weeks, and turnaround times for test results appear to be speeding up.

Washington still has a limited supply of test kits, including swabs and specimen-preserving chemicals. The continuing shortage of test kits remains the biggest obstacle to reopening the economy, Gov. Jay Inslee said Wednesday.

Information from Seattle Times archives is included in this report.