Groups of seniors left their homes at The Brighton Apartments on Rainier Avenue South, walked next door to a parking lot and got something that has been hard to come by this winter: A coveted COVID-19 vaccine.

For 10 residents who were not able to leave their apartments, a nurse went door to door. By the end of the day Wednesday, 16 more people were brought over from a nearby senior center to use up the last of the vaccine.

In all, about 100 seniors were given their first of two doses of the Moderna vaccine through this pop-up clinic, organized by The Othello Station Pharmacy, the Somali Health Board and The Brighton Apartments, in an effort to address racial and technological disparities that have plagued the vaccine rollout. 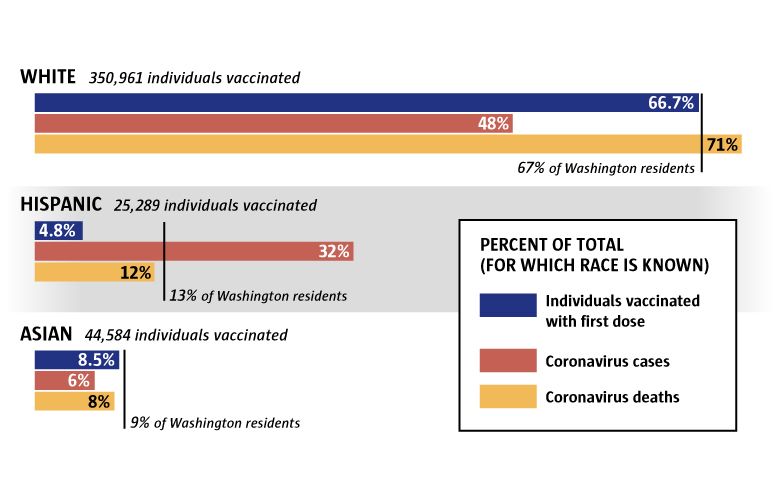 “We recognize the challenges that the vaccine distribution has had on communities of color, particularly our community here in Southeast Seattle,” said pharmacist Ahmed Ali, owner of the Othello Station Pharmacy and executive director of the Somali Health Board. “We decided to bring the vaccination to them here, in their own apartments.”

When Ali’s pharmacy received its first vaccine allotment from the state Department of Health (DOH) on Monday, he worked quickly to focus on residents 65 and older at The Brighton, most who are people of color and many who are immigrants and refugees.

“This is community-led, in partnership with the Department of Health,” Ali said. “COVID has significantly impacted communities of color. We want to make it easier for them to access the vaccine. We also wanted to bring in people that they could relate to — pharmacists, nurses and community advocates that look like them.”

Theresa Morris, 65, held her tiny dog, Nana, as she received her first dose at the clinic. She was nervous, but after a few encouraging conversations, including a phone call with a nurse, she decided to come.

The Brighton, owned and operated by the nonprofit Southeast Seattle Senior Foundation, is an affordable housing complex purchased by a group of community members in 1999, said Curtis Brown, its executive director. The building charges one of the lowest rents for a private housing complex without government funding in Seattle, he said, where many residents have lived for over a dozen years. To be eligible to rent at The Brighton, the head of the household must be 55 or older and their income cannot exceed 80% of the median income in King County.

“It’s a community in a community,” Brown said. “In a couple days, residents made sure everyone in the building knew about the vaccination opportunity. On the day of, they made sure everybody got out there at their appropriate time and they also helped planned the logistics, from moving seniors into registration, to helping them make sure their paperwork was filled out right.”

Mary Bailey, 77, a member of The Brighton’s coronavirus outreach committee, said older adults face challenges in getting vaccinated. Some of those obstacles include difficulties with computers, long wait times to schedule an appointment by phone, language barriers with paperwork, lack of transportation to vaccine sites and an increased risk of transmission when leaving home, she said.

“One of our residents is 93; she was willing to go [to a vaccine site] but she would have to take the Access Bus and then sit and wait for them to come back, which can take an hour or two,” Bailey said. “At her age, I would be worried for her going alone.”

The outreach committee formed last spring as a way to check in with residents about their needs, distribute masks, promote hand-washing and share information, said Bria Chakofsky-Lewy, a community health nurse with longtime ties to The Brighton.

“In initial conversations about COVID vaccines, people expressed their concerns about the racism in health care and talked about the Tuskegee Experiments,” she said, referring to the Tuskegee Syphilis Study, which the U.S. government carried out for decades on Black men without their consent and with empty promises of medical care.

“As there was more information about the vaccine and as people saw public figures like President Biden and [Vice President] Kamala Harris being vaccinated, fears lessened and interest in the vaccine increased.”

Ali worked with local media groups to film a video of his own vaccination, which included information in Somali and English, and was shared with Brighton residents.

Eula Breland, 83, who grew up in the Central Area and went to Garfield High School, said she got involved with The Brighton’s COVID-19 outreach committee after losing two friends to the virus and wanting to help her neighbors.

“I have been in this building for about 17 years,” Breland said. “The people in the building are more or less like family.”

Breland relies on an Access Bus for transportation. After making calls to her doctor’s office trying to get an appointment, it felt “wonderful” to walk to her vaccination appointment with other residents.

“Being an African American woman taking the vaccine, I hope I’ll be an example that it will be OK,” Breland said.

After the pop-up, Ali and his staff spent a lot of time on the phone and at the pharmacy talking to people who want the vaccine. He believes having information shared from trusted community leaders contributed to Wednesday’s high turnout. He plans to replicate the pop-up in other sites in Southeast Seattle and South King County.

“There is a lot more awareness in the community,” he said.