Jenny Brackett walked alongside a line of vaccine seekers that snaked out clinic doors, through a parking lot and extended across several blocks of the UW Medical Center — Northwest hospital campus in Seattle.

“Is anyone here over the age of 65?” Brackett, an assistant administrator with UW Medicine, called out to several hundred people who were waiting past midnight on a chilly Northwest evening for a chance at receiving sought-after vaccine.

“Right here! We got one,” someone yelled from the line. An older woman emerged. The crowd cheered her on. Brackett handed her a ticket allowing her access to a vaccination clinic buzzing with frantic energy.

During a chaotic vaccine rollout, this might have been one of the wildest scenes yet: After a freezer failed at a nearby medical center, nurses, firefighters and volunteers scurried throughout the hospital in a mad-dash scramble to use as many doses of Moderna COVID-19 vaccine as possible before they expired. 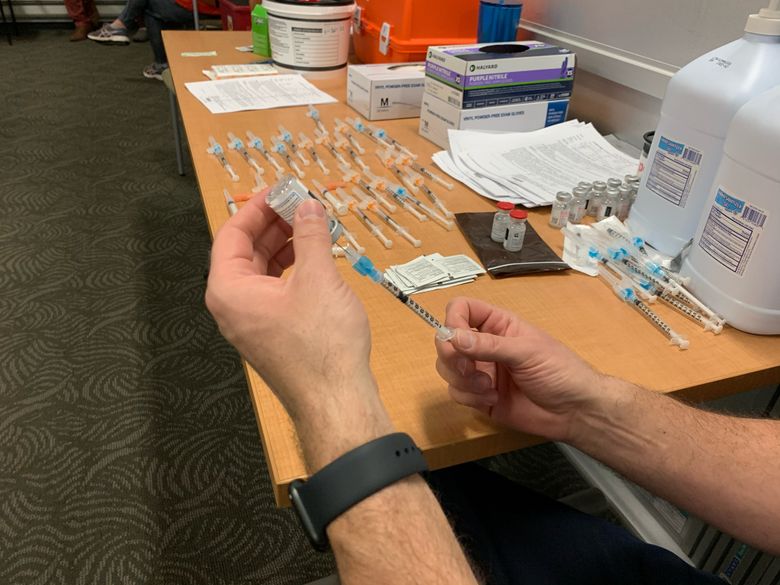 “I received a call this evening at 9 o’clock and learned a Kaiser freezer went down and could we help vaccinate people before the doses expired at 5:30 in the morning?” Brackett explained. Between UW Medical Center’s Northwest and Montlake locations, they had 800 unexpected doses to administer.

It was not immediately clear early Friday morning what had caused the freezer failure, and a Kaiser Permanente Washington spokesperson did not elaborate on the malfunction.

Cassie Sauer, president of the Washington State Hospital Association, said all she knew was that “it was late, it had monitoring on it — someone saw it and quickly thought to take it to someone who could get it administered.”

Sauer said she conferred with the health department Thursday night, which outlined three priorities: That hospitals try to get eligible people through first; that those soon to be eligible, such as teachers and grocery workers, go next; and that no dose go to waste. Sauer said no dose went unused and 1,600 total doses were administered across locations.

Swedish Medical Center helped to distribute vaccine. The health system received a call at 9 p.m. and posted notice on its social media pages, prompting more than 100 people to line up at Swedish’s clinic in Campion Hall at Seattle University. Swedish tweeted at 10:59 p.m. that it had 588 doses to give out. By 12:30 a.m., all the appointment times had been taken.

At the Swedish clinic, vaccines were still being administered past 3 a.m. Friday.

Swedish reached out Thursday evening to clinical and nonclinical volunteers who had been consistent workers at the clinics, then filled in gaps with partners and spouses. Word also spread on social media among health-care workers and volunteers that the clinic had an urgent need for help.

“On our Swedish call, we did a round robin to say who was able to be there, and a lot of us chimed in with, ‘Yes, and I’ll bring a plus-one,’” spokeswoman Tiffany Moss said.

Swedish posted about its vaccine availability on Twitter and Facebook, in the hopes that younger adults, who are much more likely to use social media, would see it and be able to help their older loved ones or others who qualify but aren’t as tech savvy. According to the Pew Research Center, about 40% of adults older than 65 use social media, compared with 69% or higher for other age groups. Swedish also reached out to local TV stations to include the message in the 11 p.m. news broadcasts.

At UW Medical Center — Northwest, word had spread on social media and in text chains like wildfire, bringing a throng of people, mostly too young and healthy to qualify in normal circumstances, to the clinic’s doors. Brackett said the hospital was doing its best to vaccinate those eligible in the state’s phased vaccine rollout, but that the main objective was to get it into arms and avoid waste.

One woman plucked from the crowd, Tyson Greer, 77, said she had been waking up at 1 a.m. or 3 a.m. for more than a week to search online for hard-to-secure vaccination appointments.

Now, she sat in the corner of a dingy cubicle at 1 a.m. before associate chief nursing officer Keri Nasenbeny, awaiting vaccination.

“All done! Shot one,” Nasenbeny said.

“We’ve been so careful,” Greer said with relief, as she was sent off to be observed for 15 minutes in case of side effects.

Nasenbeny said many of the staffers working the vaccination clinic had been at work since 7 a.m.

When she received word that there was fast-expiring vaccine available, she called about eight nurses, who in turn rustled up pharmacists and other volunteers. From Nasenbeny’s perspective, a Seattle firefighter had seemingly appeared out of thin air to help. A hospital staffer’s boyfriend was helping manage the queue.

“Everyone was just like, ‘Yes,’” when asked to help, Nasenbeny said.

Meantime, streams of appreciative and newly vaccinated people walked out of the clinic and into the night with a lighter step.

“I’m fortunate,” said Sarah Leyden, 57, who got word of the impromptu clinic from her wife, a hairdresser, who had learned of it through a client who is a nurse. “I just got lucky.”

As of Jan. 26, 2,315 vaccine doses have been wasted in Washington state, according to Danielle Koenig, a Department of Health spokeswoman, including 1,000 lost due to improper storage. The remainder were broken, dropped, spilled or left unused and allowed to expire. The waste data is likely an undercount, as Koenig said not all providers are consistently reporting it to the system.

In the first week of vaccination with Moderna doses, 1,000 went to waste at Coulee Medical Center in Central Washington, Koenig said.

The medical center had an approved refrigerator for Moderna vaccine, but a shipment label indicated the doses needed to be frozen, so the facility placed them in a freezer, Koenig said. The freezer did not have a digital data logger and Moderna ultimately advised that the doses be discarded because safety and efficacy could not be guaranteed without a logged temperature history.

“We want to be clear this was not the result of the facility being careless,” Koenig wrote. ” … Everyone was still getting used to the requirements.”

Ramona Hicks, the chief executive officer of Coulee Medical Center (CMC), said she was grateful to hear that Kaiser had been able to use its at-risk doses. Her facility was forced to dispose of valuable vaccine.

“I was not able to do that. It’s been just devastating to our staff,” Hicks said, saying that both the health department and her facility thought they were following correct protocols. “It was just really unfortunate and then we needed to really err on the side of safety.”

Hicks said the Grant County Health District had agreed to provide CMC with a suitable freezer, which is equipment that has been difficult to acquire with demand hot around the country.

Sauer said hospitals should be prepared for future technical difficulties.

“It would be worth the state asking all their vaccine providers to make a late-night plan,” Sauer said.