OLYMPIA — In a development that shook up a recent onset of hope amid the monthslong pandemic, Gov. Jay Inslee announced that the U.S. Centers for Disease Control and Prevention (CDC) has told Washington officials that the state’s coronavirus vaccine allocation will be reduced next week by 40%.

The CDC “has informed us that WA’s vaccine allocation will be cut by 40% next week — and that all states are seeing similar cuts,” Inslee tweeted Thursday morning. “This is disruptive and frustrating.”

“We need accurate, predictable numbers to plan and ensure on-the-ground success,” he added. “No explanation was given.”

U.S. Sen. Patty Murray, D-Wash. echoed those sentiments in a tweet of her own, saying, “We need answers and I’m pushing to get them right now — and I will let you know what I find out.”

In a statement Thursday, a spokesperson for the U.S. Department of Health and Human Services disputed that the distribution numbers had been reduced.

“Reports that jurisdictions’ allocations are being reduced are incorrect,” according to the spokesperson, adding later that the Trump administration’s vaccine program “remains on track to allocate enough vaccine for about 20 million Americans to receive their first doses before the end of the month,” provided a second vaccine by Moderna is authorized for use.

States across the country were reporting confusion over reductions. The Oregon Department of Human Services reported its allotment was being reduced by a similar percentage to Washington’s, according to a news release.

Experts warned a project of this magnitude would not run smoothly, but with the pandemic experiencing its deadliest moments, the speed of vaccination is paramount for fatigued health care workers and vulnerable nursing home residents. 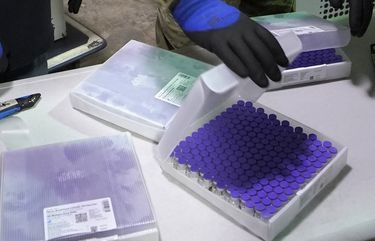 Pfizer said it was not having production issues with its vaccine in a statement on its website.

“… No shipments containing the vaccine are on hold or delayed. This week, we successfully shipped all 2.9 million doses that we were asked to ship by the U.S. Government to the locations specified by them. We have millions more doses sitting in our warehouse but, as of now, we have not received any shipment instructions for additional doses.”

The first doses of a new vaccine reached Washington earlier this week, a rare glimmer of hope during the pandemic.

Health officials Thursday morning were digesting the unwelcome development of the planned reduction of available doses.

Cassie Sauer, the president of the Washington State Hospital Association, said state health officials called at around 8 a.m. Thursday to deliver the grim news. They said they did not know the reason for the cut.

“This is so disappointing and frustrating,” Sauer said. “It was a quick call. Everyone wanted to cry or take a shot of tequila or something.”

Sauer said the problems with the vaccine rollout is frustrating to hospital leaders and employees.

“Nurses, doctors, housekeepers, they want to know when they’re to get vaccinated. They’re frustrated with hospital leadership,” Sauer said. But hospitals leaders don’t have the information they need to tell their employees when it’s their turn.

“We thought it was coming. Now, we’re thrown into uncertainty,” Sauer said, adding that the state Department of Health had made some allocation decisions for next week. “I assume they’re going to have to go back and rescind offers, which is going to be tough, tough, tough because everybody wants it.”

Sauer said the uncertainty also throws into question the federal promise that it could ensure supplies of second doses of vaccine three weeks after the first has been administered.

“Our instructions to hospitals has been vaccinate everyone you can: Use all your doses,” Sauer said. “We’re going to have to have that conversation with the state — should hospitals reserve doses?”

With the Pfizer vaccine already approved, and a similar one from Moderna, Washington officials had expected the federal government to ship more than 400,000 doses to the state by the end of 2020.

But during a previously scheduled news conference Thursday on the governor’s proposed budget, Health Secretary John Weisman said DOH recently learned it will be told how many doses the state will receive only a week in advance.

Wiesman said he could only confirm that the state would receive the full shipment of 62,400 Pfizer doses this week and 44,850 next week, as well as 128,000 doses of the Moderna vaccine next week if it receives authorization.

“While we had shared numbers that we thought we would get through the end of the month, at this point we are unable to do that,” he said.

An advisory committee of independent experts Thursday afternoon recommended that the FDA approve Moderna’s vaccine. A decision from the agency is likely to come as soon as Friday.

Initial doses of both vaccines are intended for health care workers, such as those who treat patients face-to-face or who administer virus tests, as well as for first responders with a high risk of exposure.

Residents of long-term care facilities — who since the earliest outbreak in Washington have been among the most vulnerable — are also expected to get early doses of the vaccine.

DOH had initially planned to set aside its entire shipment of Pfizer doses next week for a program with Walgreens and CVS, which will vaccinate residents and staff at more than 2,600 long-term care facilities in the state, according to an email from DOH’s acting assistant secretary Michele Roberts last Friday.

The federal program can be activated when the state allocates at least half of the doses needed — about 40,000 to start vaccinations at nursing homes and then 134,000 to cover other kinds of long-term care facilities, Roberts said. If DOH puts all of its reduced shipment toward the program next week, it could still begin on Dec. 28.

On Thursday, DOH officials did not respond when asked if the cut in vaccines would affect rollout to long-term care facilities. But the president and CEO of LeadingAge Washington, which represents nonprofit facilities, said she was told by a DOH immunization official Thursday afternoon that distribution will start on time.

In a Thursday news conference, Inslee said the state is “very intent” to do this soon.

“If we do in fact have shortages … we need to continue our preexisting plans for the long-term care facilities,” Inslee said. “We have got to get these people vaccinated.”

The CDC notified the state Department of Health about the reduction in a phone call late Wednesday, Inslee spokesperson Mike Faulk wrote in an email.

The reduction is for distribution that has been slated for the week of Dec. 22, wrote Faulk. Faulk said the governor’s office had only heard of reductions to the second Pfizer shipment.

The news of a reduction in vaccines spurred concerns in health departments across the nation about whether the Trump administration’s vaccine program — known as Operation Warp Speed — could distribute doses fast enough to meet a target of delivering first shots to 20 million people by the end of the year, according to a report in The Washington Post.

The reductions could be partially offset by a trend pharmacists noticed this week. Pharmacists around the country found they could often draw six, or even seven, doses out of vaccine vials that Pfizer had said contained just five. The ability to draw extra doses seems to depend on using the most efficient syringes and needles. Syringes and needles come with vaccination kits provided by the federal government.

The FDA on Wednesday said these additional doses could be used by those administering the vaccine.

State health officials Thursday evening reported 3,074 new coronavirus cases and 75 more deaths. That brought Washington’s overall number of diagnoses to 217,205, according to the DOH, including 3,117 deaths. At least 13,235 people have been hospitalized in Washington due to COVID-19.