As coronavirus levels reach record highs in Washington, health officials from around the state warned Tuesday afternoon that “any in-person gathering is risky,” including Thanksgiving dinners.

The message at Tuesday’s joint briefing: Unless people change their behavior — limiting gatherings, wearing masks and maintaining physical distance — the recent spike in infections could continue and could be followed by more hospitalizations and deaths.

“We are really concerned at this point with what we are seeing in the trends and believe that immediate action is needed now to flatten the curve,” said state Secretary of Health John Wiesman.

Another stay-home order also appeared to not be off the table, although multiple health officials stressed a desire to avoid that option.

“We do not want to take further actions that will further hurt our economy,” said State Health Officer Dr. Kathy Lofy. “But unfortunately, if we continue on this trajectory, at some point we may need to.”

Coronavirus infections are accelerating across the United States, with an average of more than 100,000 cases a day being reported nationally. More than 10 million Americans have been infected and nearly 240,000 have died. 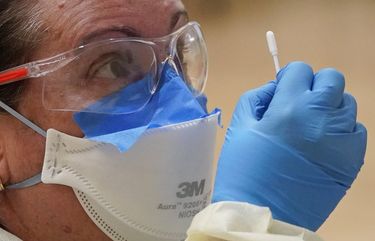 The situation is also growing dire in Snohomish County, where officials said the county’s case trend was concerning.

“If we had a dashboard, every light would be blinking red and every warning buzzer would be going off,” said Snohomish County Executive Dave Somers, saying that the county was headed “into uncharted territory” and that the third wave appeared to be “the largest yet.”

The coronavirus case rate in Snohomish County is 187.7 per 100,000 people over a two-week period, more than four times the rate just two months ago. Somers said interactions at home, among family and friends, were most likely responsible for the uptick.

He also said the county’s positivity rate — the proportion of tests that have come back positive — indicates that the increase in case numbers does not merely reflect an increase in testing.

“Those are sick people seeking testing because they’re ill,” Spitters said of the data. “The positivity rate is going up. This is, by all measures, a true increase.”

Somers said the county was discussing additional restrictions or new policies to slow down the virus’s spread.

“If we don’t push the curve back down, we will almost certainly have to go backwards,” Somers said. “None of us want to do that.”

“No one thing appears to be driving up the numbers,” Chen said, noting the county has seen increased transmission in community settings and in households.

Pierce County reported its highest one-day increase in cases on Saturday with 226. It had 198 infections per 100,000 residents during the most recent recorded two-week period — a rate 12 times higher than the county had in June and four times higher than in September, Chen said.

“We need to continue to find ways (to prevent transmission), despite COVID fatigue and everything else that we’re struggling with now,” Chen said.

State officials wouldn’t say at what point more stringent measures might be implemented or whether counties could move backward in the state’s four-phase Safe Start reopening plan.

The onus now is on Washingtonians to do what is needed to blunt transmission, said David Postman, chief of staff to Gov. Jay Inslee, who was reelected last week to a third term.

“[Additional measures] wouldn’t be necessary if people were able to do the other things that they can do immediately right now on their own,” Postman said. “And it doesn’t mean that we won’t have some sort of restriction as we saw on the spring. We don’t know.”

Ask in the form below and we’ll dig for answers. If you’re using a mobile device and can’t see the form on this page, ask your question here. If you have specific medical questions, please contact your doctor.