More than 300 days ago Dr. Thuan Ong got the COVID-19 vaccine. The moment remains a vivid memory.

Ong, who specializes in geriatric medicine at Harborview Medical Center, was one of the first people in the state to take the Pfizer shot after it arrived in dry-ice cooled boxes in December.

He welled up as he watched 12 fellow front-line medical workers finally become immunized against a disease they’d spent months on the front lines fighting. Speaking to reporters, they talked about fatigue and shared hope and concern with the vaccine’s arrival, unaware at that point the journey would continue for months longer.

Ong told himself he wasn’t going to cry when it was his turn, but when he thought about the scarcity of vaccines and felt a wave of gratitude, tears came.

“I lost it at that point,” he said. “I got my shot, then went to the back and just bawled and cried. … We were desperate.”

Now, more than 4.7 million people, or 72.5% of eligible Washingtonians, have been fully vaccinated. But infectious disease experts say the story of COVID vaccines is far from over.

The first year of vaccines brought a significant reprieve in fighting the spread of the virus that causes COVID, saving thousands of lives, reducing hospitalizations and allowing businesses and restaurants to largely reopen in Washington state. The year was also marked by deep anger and confusion in more rural parts of the state, fueled by widespread vaccination requirements, as well as the devastating summer of the delta variant that prompted new spikes in infections and hospitalized a record number of people, the vast majority unvaccinated.

As we head into yet another winter of unknowns, proof of vaccination will soon be required at most indoor restaurants and bars and large outdoor venues statewide. Booster shots and additional vaccine doses are available.

And as soon as this week, the nation will likely receive more news about immunizations for many of the youngest people in society.

With the move, 28 million more Americans could be further protected.

Ong said he never expected the year to unfold as it did, or that a month ago, he’d be receiving another vaccine shot.

He’s among more than 363,000 Washingtonians who have received an additional dose of vaccine — either a booster or a third shot — according to the state Department of Health. The department declined to give further information about which age groups or counties have received the most boosters.

Advertising
Are you eligible for a COVID-19 vaccine booster? 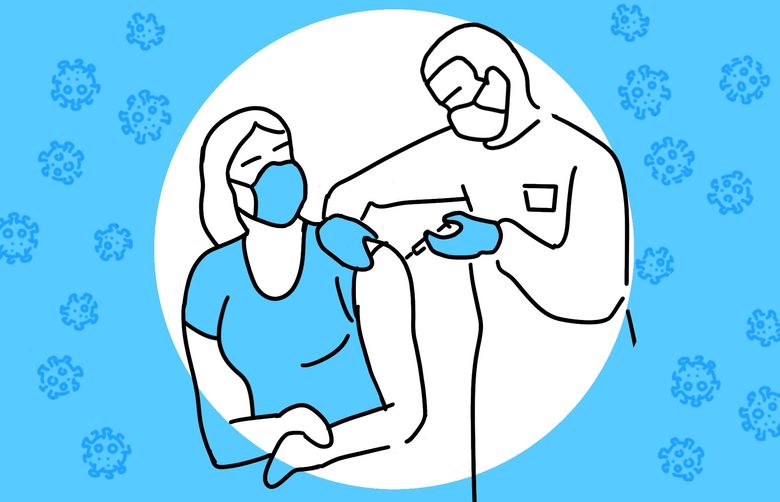 Use this flowchart to determine your eligibility.

At a UW Medicine vaccine clinic on First Hill this month, health care workers cheerfully welcomed a steady stream of people who lined up to receive their boosters.

Marilyn Morgan, a Greenwood resident who got a Pfizer booster, said widespread vaccinations, particularly boosters, have eased her anxiety as the world approaches a second winter of COVID.

“I think it’s important to look out for each other,” Morgan said as she sat in the waiting area of the clinic. “I just feel like [the virus] is a part of our life now. … and I wanted the extra feeling of feeling safe.”

Another recent booster-getter at the First Hill clinic, 54-year-old Eric Rindy, opted for Moderna. He received a pair of Pfizer shots this spring.

“We’re going to mix and match,” said Rindy, who said he has health care providers in his family. “I’ve seen a lot of good data on the antibodies being produced.”

In the past few months, the Food and Drug Administration and the Centers for Disease Control and Prevention have rolled out a succession of booster guidelines. After authorizing the Pfizer boosters for older adults and those at high risk of becoming severely ill with COVID in late September, the agencies approved Moderna and Johnson & Johnson’s versions.

Although the FDA and CDC initially recommended against mixing and matching vaccinations, the agencies this month announced new data showing it’s safe for people to receive a different COVID vaccine as a booster than the one they initially received. The change came after researchers found that recipients of J&J’s single-dose shot who received a Moderna booster saw their antibody levels rise 76-fold in 15 days, compared with only a fourfold increase after an extra dose of J&J.

Are you eligible for a COVID booster shot?

Those who received a Pfizer or Moderna COVID-19 vaccine are eligible for a booster six months after getting their second dose, as long as they’re 65 or older, or anyone who’s 18 or older and lives in a long-term care facility, lives or works in a “high-risk setting,” or has underlying medical conditions.

For those who received a single-dose J&J vaccine, officials are recommending everyone 18 and older seek a booster dose two months after their initial shot.

Those eligible for a booster can choose whichever shot they’d like. Pfizer and J&J boosters are both full doses, while the Moderna booster is a half dose.

Researchers have suggested J&J recipients might benefit most from a Moderna booster, according to a study conducted by the National Institutes of Health and presented to the FDA’s advisory panel this month. A shot of the Pfizer vaccine also raised the antibody levels of J&J recipients more than J&J boosters did, though not as much as Moderna, the study found.

Experts, however, have reminded the public that the new data was based on small groups of volunteers and short-term findings — and warned against using the findings to conclude that any one combination of vaccines was better.

“At least people have that full range of options,” said Jennifer Hernandez, a nurse manager for Harborview’s vaccine sites and mobile clinics.

While Hernandez said she’s thrilled that boosters are here, one of her main priorities remains vaccine education for those who haven’t yet received a shot — a task more urgent now that she and her team are preparing for the long-awaited vaccine rollout for children ages 5 to 11. Michele Roberts, the state Department of Health’s acting assistant secretary, said Washington expects about 316,000 doses of kid-sized Pfizer COVID vaccines to arrive in the state by the end of this week, pending federal authorization.

The FDA approved the kid-sized dose, one-third the size of the adult Pfizer dose, Friday afternoon, leaving just one more hurdle before the shots are rolled out. On Tuesday, the CDC’s Advisory Committee on Immunization Practices will make more detailed recommendations on which youngsters should get vaccinated, with a final decision by the agency’s director expected shortly afterward.

The federal government has allocated about 230,000 doses for Washington health care providers, while an additional 86,000 doses are expected to arrive at pharmacies through the federal pharmacy program, Roberts said.

She said she expects kids could start being vaccinated by the end of the week.

Of the about 680,000 children in the state’s 5- to 11-year-old population, Roberts said, she believes about 30% of parents will seek shots for their children.

Plans for inoculating children have been in the works for weeks.

At Hernandez’s First Hill vaccine clinic, they’re setting up a separate pediatric room, where anxious kids can lie down and calm their nerves before or after getting their shot. Hernandez said they’re also working on getting TVs and candy stations set up.

“Our idea is just to fast track all of these kids,” she said. “We make it quick. We don’t prolong it.”

Seattle Children’s is also preparing to vaccinate thousands of kids.

While Bell and her team are experienced in giving children vaccines, she offered some advice for families and caretakers in preparing their kids for the shots.

“It’s really important to be honest,” she said. “And not try and trick your child.”

Offer very literal reasoning, she advised — “Do this to protect your little sister or brother,” or “If you want to go to a concert or movie, you have to get the vaccine.” Talk to them about what’s going to happen. Try to give them books or stickers when they get their shot to take their minds off the sting.

A large part of Bell’s excitement for approval for childhood vaccinations is centered on keeping kids in in-person school.

“The idea that we’re going to be able to make school that much safer is another really added benefit,” she said. “We’ve already seen the benefit of in-person schools.”

Vaccine requirements have slowly ramped up throughout the state as the first year of COVID shots has unfolded.

State government, health care and school employees must be vaccinated or have an approved religious or medical exemption if they want to keep their jobs. Compliance numbers have fluctuated since the mandate deadline this month, but so far 56,866 government workers, or 93% of remaining workers, had provided proof of vaccination or had an approved exemption. More than 88% of the state’s hospital workers have also met the requirements. About 89% of school staff statewide have complied.

Last week, a new King County rule went into effect, requiring patrons to show proof of COVID vaccination or a recent negative test to dine-in at bars and restaurants, work out in gyms and enjoy indoor entertainment venues.

The new rule also applies to conferences and conventions, and any large outdoor gatherings with more than 500 people.

Many Seattle-area restaurant and bar owners were already requiring proof of vaccination or a negative test for dine-in customers and were happy to comply, but other businesses say they’ve lost customers because of the requirement and don’t want another regulation they say could hurt small businesses.

Statewide, large indoor and outdoor events will next month start requiring all attendees to provide proof of vaccination or a recent negative coronavirus test. The order, which goes into effect Nov. 15, will apply to all indoor events with 1,000 or more attendees and all outdoor events with more than 10,000 attendees, including conventions, concerts, sporting events, fairs and theme parks, Gov. Jay Inslee announced this month.

Some venues have put new practices into place to comply with the mandate. Lumen Field, for example, is partnering with Safeway to hold vaccination and rapid-testing sites outside the stadium before Seahawks games.

In general, however, access to rapid testing remains a challenge, said Donna Hansel, a professor and chair of Pathology & Laboratory Medicine at Oregon Health and Science University, in a recent webinar (co-hosted by the M.J. Murdock Charitable Trust and The Seattle Times).

In comparing antigen to PCR rapid tests, Hansel said antigen tests have a sensitivity range of 60 to 70% — lower than PCR tests — but are very accurate if they return positive.

“If you’re negative by an antigen test, you really need to follow that up with a PCR, especially if you’re having symptoms,” she said.

Preparing for the winter

As has been the case with much of the pandemic, uncertainty lies ahead, especially as colder temperatures keep people inside, where there’s less room for distancing, and other respiratory viruses emerge, infectious disease experts say. But they’re more optimistic than they were last year.

“Pending the emergence of a new type of delta, for example, or something that really does break through the immune protection we have from vaccines, I anticipate people will be more into a groove,” Hansel said during her recent COVID webinar.

We know what to do to keep each other safe, though questions remain about who can and will choose to follow those measures, said Dr. Larry Corey, a scientist at Fred Hutchinson Cancer Research Center in Seattle who participated in the webinar.

“We’ve developed countermeasures,” Corey said. “And it’s the deployment of the countermeasures — vaccination being one of them, masking being the second one — that will determine [the future of the pandemic].”

Information from The New York Times and The Seattle Times archives was used in this story.