LOS ANGELES (AP) — The nation’s largest county was on the brink of a stay-home order just days before Thanksgiving after a spike of coronavirus cases Monday surpassed a threshold set by Los Angeles public health officials to trigger one.

An “impressive and alarming surge” of more than 6,000 new cases put the county over a five-day average of 4,500 cases per day, said Public Health Director Barbara Ferrer, though she declined to take action until county supervisors meet Tuesday.

If the county orders residents to stay home, it would be the first such action since mid-March when Gov. Gavin Newsom followed several counties and issued a statewide order that closed schools and severely restricted movement, except for essential workers or to buy groceries or pick up food.

Newsom has issued a 10 p.m. to 5 a.m. curfew for almost all state residents and urged residents to avoid nonessential travel — during what is typically the busiest travel days of the year. Anyone entering the state is advised to quarantine for two weeks.

If another stay-home order is issued, it could create a conflict for those who planned to get together for Thanksgiving. Officials have been urging people not to meet with more than two other households and to celebrate outside and follow physical distancing rules. 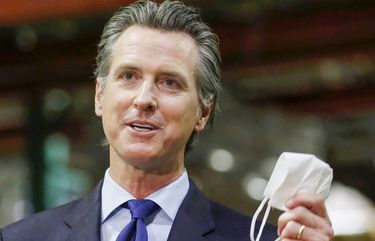 30,000 new cases in California over weekend; Newsom in quarantine

Newsom on Monday said gathering at Thanksgiving is risky and Ferrer went a step further. She urged people to only gather with members of their household.

Despite the advisory, millions of Californians are expected to travel on Thanksgiving, though mainly by car. Flights at San Francisco International Airport were down 75% from the same period last year, airport spokesman Doug Yakel said.

“From October 31 through November 13, average daily cases increased 108% — which is a much more rapid surge in cases than what we saw in the summer,” Ferrer said.

A week ago, Ferrer said she was hopeful the county wouldn’t hit an average of 4,000 cases until early December and didn’t think that it was inevitable.

But it passed that threshold on Sunday, triggering an order shutting down restaurant dining for three weeks starting Wednesday at 10 p.m. and further crippling an industry that has been reeling from the virus.

Restaurant owners in Los Angeles who have had to adapt to ever-changing rules were trying to reinvent their businesses once again to keep afloat with only delivery and take-out.

Owners said they were upset the county had taken the action when it seemed infections were more likely coming from private gatherings.

“The same people desperate to go to bars are going to party in their houses,” said Brittney Valles, owner of Guerrilla Tacos in downtown Los Angeles. “You will never see them until they’re spreading coronavirus around willy-nilly. It’s insane.”

Valles said she broke down Saturday as she realized it could be the last time — at least for a while — that she would see some of her 68 employees. It will be the third time she’s had to furlough employees and she was trying to develop a plan to keep as many employed as possible.

Greg Morena, who had to close one restaurant earlier in the year and has two in operations at the Santa Monica Pier, said he was trying to figure out his next step but was mainly dreading having to notify employees.

“To tell you, ‘I can’t employ you during the holidays,’ to staff that has family and kids,” Morena said. “I haven’t figured that part out yet. It’s the heaviest weight that I carry.”

Business owners in some parts of the state have ignored rules requiring them to close or curtail operations. Others have challenged the orders in court.

A San Diego judge on Monday rejected a request to temporarily restore indoor service at restaurants and gyms in the second-most populous county that were forced to move operations outside this month to slow the spread of the coronavirus.

Two restaurants and two gyms sued on behalf of their industries to have California’s four-tier system of business restrictions declared illegal. They wanted to restore indoor operations to 25% capacity for restaurants and 10% for gyms, the levels prior to a recent surge in cases.

Restaurants in LA have said there’s a lack of evidence that serving food outdoors is contributing to the spike.

Los Angeles County Supervisor Kathryn Barger, who said she opposed another stay-home order, also challenged the wisdom of halting dining outside restaurants — the only way they’ve been able to serve food since the earlier stay-home order.

Ferrer, however, said that outbreaks in the first two weeks of the month doubled at food facilities, including restaurants, processing plants, bottlers, grocery stores and related businesses.

“We are seeing a significant number of violations around the physical distancing protocols, including violations at restaurants, bars breweries and wineries,” Ferrer said.

BRIAN MELLEY
CHRISTOPHER WEBER
The Seattle Times does not append comment threads to stories from wire services such as the Associated Press, The New York Times, The Washington Post or Bloomberg News. Rather, we focus on discussions related to local stories by our own staff. You can read more about our community policies here.
Advertising