A Snohomish County resident is infected with the new coronavirus that has been ravaging China and begun to spread to other countries, marking the first confirmed case in the United States of a mysterious respiratory infection that has killed at least nine people and sickened hundreds more in Asia.

The patient is a man in his 30s who lives alone. He had been traveling solo since November in Wuhan, China, a city of 11 million where the outbreak appears to have originated, health officials said. He had no symptoms on his flight or when he arrived at Seattle-Tacoma International Airport on Jan. 15, but he contacted doctors Jan. 19 when he developed a fever and cough, officials said. It’s unknown which clinic he visited that day. The man was hospitalized for pneumonia and, on Monday, tested positive for coronavirus.

The newly discovered virus can cause coughing, fever, breathing difficulty and pneumonia. It has infected more than 400 people, nearly all of them in China, and killed 17 people in Hubei province, Chinese authorities said Wednesday. Most of the dead were age 60 or older, and at least some had a previous medical condition.

The Snohomish County man had no known underlying medical issues. He was in satisfactory condition Tuesday and will be monitored for at least 48 hours in an isolation unit at Providence Regional Medical Center in Everett, said Dr. Chris Spitters, interim health officer for the Snohomish Health District.

The patient isn’t considered a threat to medical staff or the public. A small number of health care workers and patients who may have been exposed to the virus through the man have been notified to watch for symptoms and are being monitored, according to the hospital, which said it will also work to identify and screen patients at risk for the infection.

Officials praised the man, who had been following the news about the virus and its spread, for taking the initiative to reach out to his health care provider.

“He was a very astute gentleman,” Dr. Scott Lindquist, Washington state’s epidemiologist, said in a news briefing with the national Centers for Disease Control and Prevention (CDC) on Tuesday. Because he “was looking out for his health care, we were able to detect it early and really minimize any exposure to anybody.”

Officials have said the virus probably spread from animals to people, but recent evidence shows it also can spread from person to person, although it is not clear how easily or how long a person is contagious.

The outbreak, which began in an animal market in Wuhan, is spreading: Patients have been identified in Beijing, Shanghai and Shenzhen, as well as Taiwan, Japan, Thailand and South Korea. The U.S. is the fifth country to report seeing the illness. Hong Kong quarantined a tourist on Wednesday who appears to have the virus.

The Snohomish County patient said he didn’t visit an animal market where the virus is believed to have originated and wasn’t in contact with anyone he knew to be ill, Spitters said. 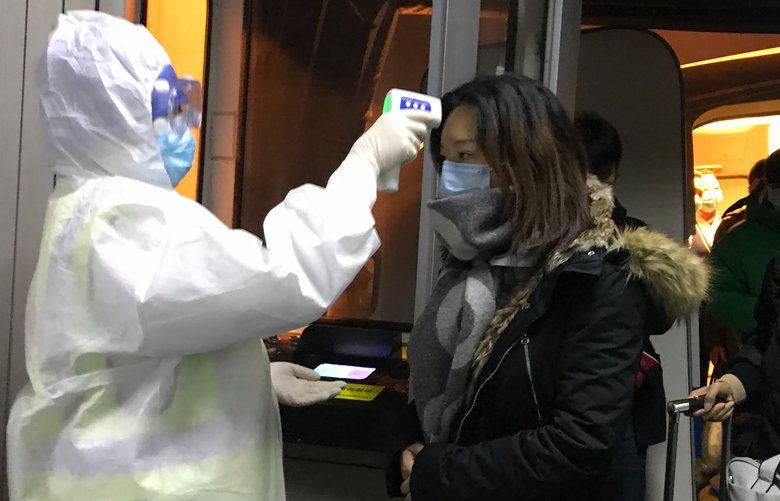 Airports in the U.S. and other countries have stepped up monitoring, checking passengers from China for signs of illness, in hopes of containing the virus during the busy Lunar New Year travel season.

Late last week, U.S. health officials began screening passengers from Wuhan at three U.S. airports — New York City’s John F. Kennedy airport and the Los Angeles and San Francisco airports. It was the first such effort since the 2014 Ebola outbreak. More than 1,200 travelers have been screened since Friday.

On Tuesday, the CDC announced it will add Chicago’s O’Hare airport and Atlanta’s airport to the mix later this week, and anyone flying from Wuhan to the U.S. must go through one of those five airports.

In announcing the airport screenings last week, CDC officials said it had developed a test to detect the new coronavirus and plans to share the tool with domestic and international partners.

The Snohomish County patient didn’t fly directly from Wuhan to Sea-Tac. CDC and state health officials wouldn’t say which other airport the man had traveled through, but they are tracing his movements and any people with whom he may have come into contact in China and the United States, including passengers on a “group mode of transportation” the man used to get home from Sea-Tac.

Health authorities this month identified the germ behind the outbreak as a new type of coronavirus. Coronaviruses are a large family of viruses, some of which cause the common cold; others found in bats, camels and other animals, have evolved into more severe human illnesses.

SARS, or severe acute respiratory syndrome, belongs to the coronavirus family, but Chinese state media say the illness in Wuhan is different from coronaviruses that have been identified in the past. Earlier laboratory tests ruled out SARS and MERS — Middle East respiratory syndrome — as well as influenza, bird flu, adenovirus and other common causes of lung infections.

The new virus so far does not appear to be as deadly as SARS and MERS, but viruses can sometimes mutate to become more dangerous.

“Since this is a respiratory virus, it is spread easier than Ebola, so it brings with it more fear of easily being transmitted between people,” said Matthew Frieman, a virologist and associate professor at the University of Maryland medical school who studies coronaviruses.

University of Washington coronavirus researcher David Veesler said the public “should not be panicking right now.”

The response has been “very efficient,” Veesler said. “In a couple of weeks, China was able to identify the virus, isolate it, sequence it and share that information.”

Veesler added: “We don’t have enough data to judge how severe the disease is.”

Health officials expect to see more cases in the U.S. and around the world in the coming days, said Dr. Nancy Messonnier, director of the CDC’s National Center for Immunization and Respiratory Disease. The risk to the general American population is low, she said, although older adults with underlying health conditions may be at increased risk. She said federal officials are prepared to respond quickly.

“At this point, folks should go around and do their normal business,” Dr. John Wiesman, the state’s secretary of health, said at a Tuesday afternoon news conference with other health officials and Gov. Jay Inslee.

The outbreak in China has rattled global financial markets, prompting investors to shift assets into bonds and defensive sector companies. Stocks in the travel sector — airlines, hotels and cruises — took a hit Tuesday.

The World Health Organization plans to meet Wednesday to decide whether to declare the outbreak an international public health emergency. But information about the new virus is still thin.

“There are still more questions that we don’t know the answers to, than things we do know,” said Dr. William Schaffner, a professor of preventive medicine and infectious diseases at Vanderbilt University Medical Center in Nashville, Tennessee. “For example, what is the source? We don’t know exactly. The location likely was the live animal market, but we don’t know the particular animal.”

The more pressing question, he said, is: “How frequent is human-to-human transmission?”

One patient appears to have infected 14 health care workers in a medical facility, but that individual may have been a “super-spreader,” he said. “Could people with mild infections transmit this virus from person to person? That all remains still under investigation.”

Schaffner cautioned those traveling to China to keep their distance from all live animals. Travelers to China are also advised to practice good hand hygiene, avoid anyone who is coughing or sneezing, and monitor themselves for symptoms such as headaches, coughs, fever or breathing issues.

Related FAQs about the coronavirus outbreak

Seattle Times staff reporters Ryan Blethen and Elise Takahama contributed to this report, which also contains information from The New York Times, The Associated Press and The Washington Post.