For months, COVID-19 vaccine appointments have been at a premium, guarded by eligibility requirements, do-not-share website links and far more demand than supply.

With all Washington adults eligible and 40% of residents having received at least a first dose, vaccine appointments are now seemingly abundant — time slots previously snagged within seconds are now among thousands open for the taking. 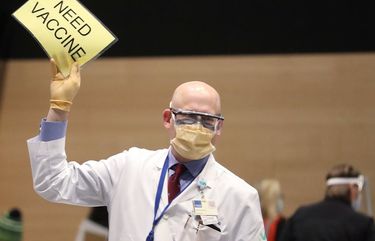 How to get a COVID-19 vaccine in Seattle, King County and Washington state

Supply and demand fluctuate, but site operators in the Puget Sound region report a similar situation this week: More than enough shots, not nearly enough arms. Lumen Field, for example, has 8,000 open slots Friday, but just 3,000 people had made an appointment as of Wednesday evening.

Officials attribute the slowdown to several factors, including accessibility, ongoing vaccine hesitancy or ambivalence, and, in some cases, a surge in supply that unexpectedly surpassed demand.

“There are a lot of people who are ready to be vaccinated, but maybe because of their work schedule or other things, they’re probably not going to go out of their way to get it,” Michele Roberts, the Washington State Department of Health’s acting assistant health secretary, said in a briefing this week. “So it’s our job to figure out, how do we make it easy?”

Maintaining a steady vaccination rate is especially important, experts said, as coronavirus cases and hospitalizations increase across the state in what Gov. Jay Inslee described as the fourth wave of the pandemic. In King County, there have been 236 new cases per 100,000 people over 14 days, and 5.7 hospitalizations per 100,000 people over seven days, according to Public Health – Seattle & King County.

Seattle’s mass-vaccination sites received about 52,000 vaccine doses this week — three times the doses received last week. The city sent out several notices about open appointments and encouraged people to circulate the scheduling links. It’s a departure from the previous messaging of the need for limited vaccine dose appointments to go the most vulnerable groups first.

As thousands of people Wednesday filed in to the Seattle event space to receive a Pfizer shot, a small portion of the tables for vaccine administration and chairs for waiting the required 15 minutes post-vaccination were empty.

“The ground has shifted in Seattle,” Mayor Jenny Durkan said Wednesday after she and U.S. Health and Human Services Secretary Xavier Becerra toured the site. “We finally have enough vaccinations” for anyone who wants one, she added.

It can be difficult to find the balance between doses and people wanting them each week, Renee Rassilyer-Bomers said. Providers don’t want to clamp down on appointments because that could prevent someone who is initially hesitant from booking a time.

To make appointments easier, walk-in vaccinations are allowed for anyone 60 and older at the Rainier Beach and West Seattle sites, along with anyone 16 or older who accompanies them. Earlier this week, the city also said it would start scheduling second-dose appointments for anyone who received a first dose from a different provider.

Excess doses at the Rainier Beach and West Seattle sites go to anyone waiting outside, according to Nyland. If no one is there, vaccine teams take doses to parks or grocery stores to find someone who needs a shot.

Sign up for a vaccine appointment at one of Seattle’s mass-vaccination sites here.

In Snohomish County, mass-vaccination sites have started scheduling appointments a week in advance, rather than just a day or two ahead. The Arlington airport site had more than 6,000 open appointments from Friday to Tuesday. The vaccination site at the Ash Way Park & Ride has appointments until 7 p.m., allowing those who can’t leave work to come afterward.

Jason Biermann, director of Snohomish County Department of Emergency Management, said that he’s heard of waning interest, but all indicators in Snohomish County suggest residents want to get vaccinated.

“We have a ways to go, but we want to make sure we are doing our part to make sure that access is there for everyone,” Biermann said at a briefing this week.

In a separate briefing, state health officials said the concern about demand underscores the need to address hesitancy among those who haven’t received the vaccine, and noted that the “early adapters” — those who took the first opportunity to secure a shot — have largely been taken care of.

At Lumen Field, Becerra, the HHS secretary, said he wasn’t concerned yet about the nation’s vaccine supply exceeding the demand.

“The day I have a concern [that] we have more supply than demand, is a very good day for America,” he said.

What has changed about your daily life? What kinds of discussions are you having with family members and friends? Are you a health care worker who’s on the front lines of the response? Are you a COVID-19 patient or do you know one? Whoever you are, we want to hear from you so our news coverage is as complete, accurate and useful as possible. If you’re using a mobile device and can’t see the form on this page, click here.
Paige Cornwell: 206-464-2530 or pcornwell@seattletimes.com; on Twitter: @pgcornwell.