The state Department of Health (DOH) reported 651 new cases Thursday, including three more deaths, which brings Washington to 100,525 infections and 2,289 deaths. The state also reported 8,183 people have been hospitalized due to the virus.

“This a sad and sobering milestone. … One hundred thousand people is too many,” the DOH said in a blog post. “Too many worried families. Too many fevers. Too many coughs. Too many nights spent awake struggling to breathe.”

In King County, the state’s most populous, state health officials have confirmed 25,712 COVID-19 diagnoses and 798 deaths.

The department continues to urge Washingtonians to get flu shots, keep social gatherings small, sanitize often and mask up — even in the smallest social circles.

Despite a drop in daily infections in late summer, the number of new cases in Western Washington has recently shot up at “an alarming rate,” a sign that health officials worry could mean the state is joining the rest of the country in a “fall surge.”

“Last Friday there were 70,000 new cases in one day in the United States,” DOH wrote. “This is the most people diagnosed in one day since July. There are more and more people getting sick right now because there is widespread disease transmission — not just local outbreaks.”

The University of Washington’s Institute for Health Metrics and Evaluation (IHME), which models the pandemic’s trajectory, has predicted the spike could continue into February and would get much steeper if social distancing and other mandates were to ease. 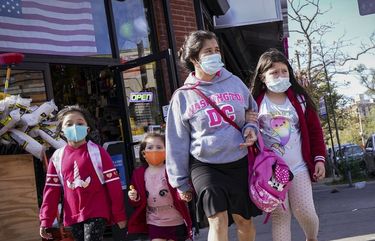 UW forecasts show why masks are easiest — and cheapest — way to save U.S. lives

At the beginning of last month, health officials reported the daily confirmed case counts, hospitalizations and deaths had all dropped since jumping over the summer. Since then, however, confirmed cases have been trending upward, with counts in King, Pierce and Snohomish counties rising since mid-September.

Gov. Jay Inslee this week announced a host of new restrictions at higher education institutions in an attempt to curb outbreaks among students but said there were no plans now to reimpose any broader restrictions like earlier in the pandemic.

Nationwide, experts have confirmed we’ve hit a third surge of the infection and are averaging about 59,000 new cases a day — the most since the beginning of August. This week, Colorado, Illinois, Kentucky, Michigan, Montana, New Mexico, North Dakota, Ohio, South Dakota, Utah, Wisconsin and Wyoming each set seven-day case records, and infections in New Jersey have doubled over the past month, according to The New York Times.

“We need to stay focused on protecting each other to keep our health care system running smoothly, support plans to open schools, and support businesses and the state’s economic recovery,” DOH said.