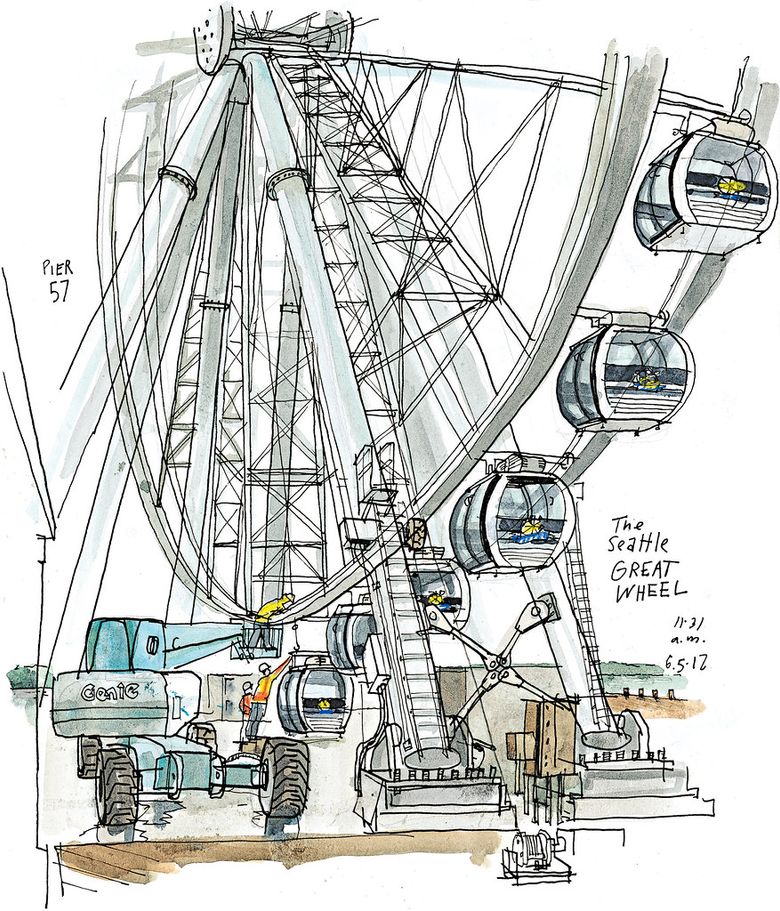 Should I be scared to ride it?

Developer Hal Griffith, who has owned Pier 57 since the 1980s, said I have no need to worry. The wheel is supported by more than 50 steel pilings filled with reinforced concrete that reach 150 feet below the surface. He even quoted his engineers: “We could have the worst earthquake in Seattle, and this wheel would still be standing.”

Griffith loaned me a hard-hat and safety vest so I could roam around while the wheel was being built and see for myself. I sat in one of the gondolas while it was still on the ground, which put me at ease with the idea of taking the 15- to 20-minute ride when the wheel opens. Who wouldn’t want to check out that view?

Project manager Simon Johnston let me step inside one of the gondolas that had yet to be unloaded from the shipping container. The space inside reminded me of a restaurant booth, with facing benches separated by a table. The benches are long enough to accommodate six people, three on each side, but depending on the passengers’ weight, eight may fit, too, said Johnston. He joked that each gondola has room for eight Europeans, at 75 kilos each, or six Americans. The sliding doors and windows are all glass, so you can count on getting some spectacular views.

Hal Griffith talks on his cellphone while a construction crew gets ready to attach the 42 Swiss-made gondolas to the Great Wheel.

Sketched May 23, 2012
(I drew this view and the one below from Waterfront Park a couple of weeks before the gondolas were installed.)
Griffith’s $20-million plus Great Wheel is the most visible change to the waterfront in years. He said the waterfront needed “something really big” to counteract the disruption being caused by the demolition and replacement of the Alaskan Way viaduct.

Sketched May 23, 2012
Griffith said rides will cost $13 (plus tax) for adults. Children, senior and members of the military will get a discounted price. He also said there’s a special VIP gondola that can be booked in advance. What makes it special? It has a glass floor, he said, and it’s for “your wife or girlfriend … that special person who gets to ride it.”