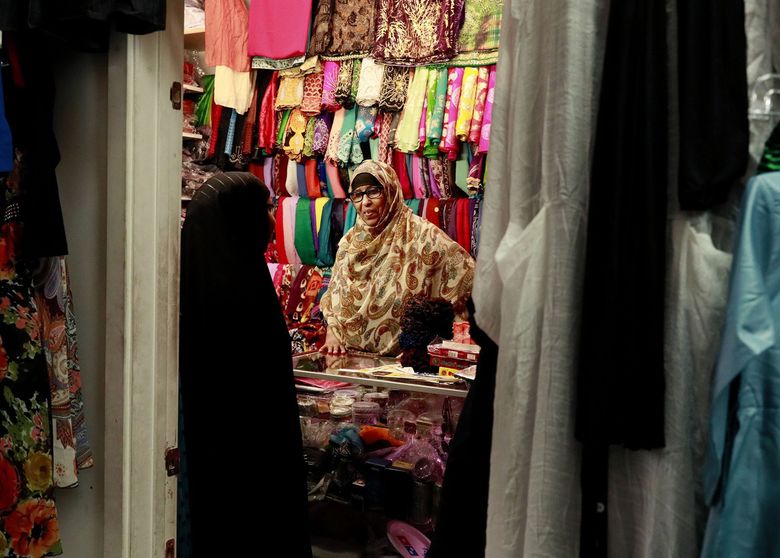 Nadifa Yusuf talks with another business owner inside the Bakaro Mall. Yusuf worries that if her nearly 10-year-old business has to move, she will lose loyal customers. (Erika Schultz / The Seattle Times)

SeaTac says it badly needs the affordable, transit-friendly housing a $15.5 million deal will bring. But as many as 50 businesses that serve as a regional gathering place for Somali refugees and other immigrants worry about their future and distrust city plans with a questionable past.

At the end of a corridor inside the Bakaro Mall, several women painted their fingertips with henna while waiting for customers in stalls packed with flowing dresses, perfumes and jewelry imported from Africa, Asia and the Middle East.

Around the corner in a coffee shop offering savory Somali pastries called sambusas, men chatted animatedly after Friday afternoon prayers at a nearby mosque.

Down another corridor, a barber was cutting hair.

It’s the kind of scene that may not last long. As gentrification pushes south from Seattle, this spot in SeaTac, kitty-corner from the Tukwila International Boulevard light-rail station, is next up.

As in neighboring Tukwila, SeaTac’s plans for development and growth are encountering fierce opposition — and a lawsuit — from largely immigrant-owned businesses facing displacement.

Even more businesses are affected in SeaTac, where the City Council voted this month to sell three, adjacent city-owned parcels along the boulevard for development plans that would capitalize on the city’s light-rail stations and the regional building boom while providing new housing and commercial space.

Yet the city’s land is already home to as many as 50 enterprises, more than 30 of them in the warren-like mall, which lies in a larger shopping and restaurant complex. Developed over the past decade as low South King County rents made the area a magnet for diversity, the complex has become a regional gathering point for Somali Americans in particular.

“All of my life savings are here,” said Sadia Elmi, seated behind her counter at the mall, wondering like many here what she would do with her stock of dresses and jewelry if she has to move.

The $15.5 million deal, if it survives contingency periods and closes next fall as planned, would create commercial space and 665 units served by a fitness center, movie-theater room, business center and other amenities.

More than half of the units — 385 — would be aimed at people earning less than 60 percent of the area median (which calculates to about $60,000 for a family of four).

The nearly five-acre project will bring new residents earning, collectively, about $40 million dollars, according to a calculation made by Councilmember Joel Wachtel (though he said $400 million at a December council meeting).

“That income will benefit our business community. You are the business community,”  Wachtel said at the meeting, addressing shop owners, many of whom he also noted were in a “building that is 60 years old and problematic.”

Yet Farah Abdi, whose family created the Bakaro Mall in 2009, modeled on a mall in Columbus, Ohio, where they used to live, said he believes the city “just wants to get rid of us.”

Timing has fueled anger in the Somali community. The vote on the sale (actually, there were two because of  disruption by protesters) happened days after a car crash killed Amina Ahmed, a beloved Somali American appointed to the council just weeks before.

The city’s past doesn’t help.

A judge hearing a lawsuit over SeaTac’s secretive 2010 purchase of the biggest parcel it is now selling — wrested from previous owners through backroom dealing and a broker that never revealed the city was its client — concluded a former mayor wanted to see development that would drive out Somali immigrants.

City officials did not return recent phone calls seeking interviews about its intentions for the property now. Spokesperson Kyle Moore said the city couldn’t comment because of a pending lawsuit against the city and Inland by a coalition of business trying to stop the sale unless they get relocation assistance.

But in an interview last spring, Steve Pilcher, then the city’s planning director and now its head of economic development, said the former mayor’s sentiments do not reflect the city’s current views.

“Our goal is to keep as many of the businesses in town as possible,” he said, referring to those now on the site for sale.

But he said it was a challenge to balance that aim with the city’s growth strategy, planned to take advantage of three light-rail stations in its midst: on International Boulevard, at the airport and at Angle Lake.

On the boulevard, he said, the city has long wanted to incorporate an international marketplace into development plans. In fact, with a legislator’s help, it applied for state funds several years ago to create a “special-gathering place to celebrate cultural diversity.”

The state agreed to provide $1.2 million through the Department of Commerce by the end of June 2019.

But SeaTac may never claim that funding. The city, which is obliged by Commerce’s terms to retain control of the part of the future development used for the marketplace, is leaving the decision up to Inland. The company could lease space back to the city and still meet that requirement, according to the state.

Inland developer Keith James said the matter is “to be determined.”

He nevertheless said he expected the development’s commercial tenants to be similar to “if not the same” as businesses there now, who will get a 10 percent break on rent in the new buildings.

“It is nearly impossible to phase construction of our project such that some businesses can remain during construction,” the company said in its proposal to the city.

Realizing the difficulty of attracting businesses back, Inland said it would have an “aspirational goal to re-tenant at least 25 percent” of them.

Abshir “Ali” Mohamed, whose family operates SeaTac Market, a three-story concern selling everything from breads to furniture, and also housing a restaurant and gathering hall, said the discount isn’t enough for business owners who don’t have a lot of money.

Uncertainty hangs in the air.

Many Bakaro Mall shop owners said they don’t know when they might have to leave; the city has not yet specified a date other than the planned closing next fall. Nor have the owners a plan for where they would go.

“We worked so hard to build our life the way it is,” Elmi said, speaking in Somali as Anab Abdi, who functions as an operations manager for the mall, interpreted.

Once a radio broadcaster in Somalia, Elmi recounted, she escaped a civil war that killed her parents and worked for years as a janitor to save money for her own business.

Known for her jewelry and hand-picked fabrics, she is sought after by people planning their weddings, Anab Abdi interjected. Customers come from as far away as Portland and Vancouver, B.C.

The looming sale already has cut into Jaswinder Sing Pabla’s business, he said. He owns a restaurant and banquet hall above the mall and estimates bookings are down 70 percent because people assume he’s closing soon.

This is the not the first time he’s been through this. Several years ago, he said, another restaurant he owned was forced out of a downtown Seattle building sold to a developer.

He said SeaTac officials told him redevelopment was coming when he signed a five-year lease with the city in 2011. But they also told him, he said: You never know, it could take a long time.

Pabla has been renting month to month since that lease ended. His neighboring tenants do the same or have a clause in their lease saying it may be canceled without compensation in the event of redevelopment, according to a March letter sent by the city to tenants giving notice of a possible sale.

As some businesses nevertheless push for compensation, they are looking, ironically, toward Tukwila as a model. “Compassionate,” the Bakaro Mall’s Farah Abdi calls officials in that city.

True, a number of Tukwila’s immigrant-owned businesses bitterly protested displacement because of the city’s plan to build a justice center along the boulevard, just a couple of blocks north of the Bakaro Mall.

Tukwila also agreed to negotiate with the businesses about a nearby city-owned property some may want to buy and relocate to.

Lawyer Kinnon Williams, who represented the Tukwila businesses, said he’s not sure if those in SeaTac have the same leverage. The law offers special protections for those facing eminent domain, as Williams’ clients are, he said.

David Bricklin, the attorney representing the business owners in SeaTac, contends the law mandates compensation for all businesses displaced by local governments. It’s a question for court.

Abdi Mohamed Adan received one of the largest settlements in Tukwila. He has found another location for his Fresh & Green Market along the boulevard, and at least two other displaced businesses will be moving to the same site, he said.

Still, as their March 31 moving deadline looms, Adan is wistful about the community he and others developed along the boulevard. “I don’t think it will ever come back to what it was,” he said.

This story has been updated. An earlier version cited Councilmember Joel Wachtel’s  comment at a council meeting that the new development would bring in $400 million a year. After this article was published, he said the figure should have been $40 million, according to his calculation.