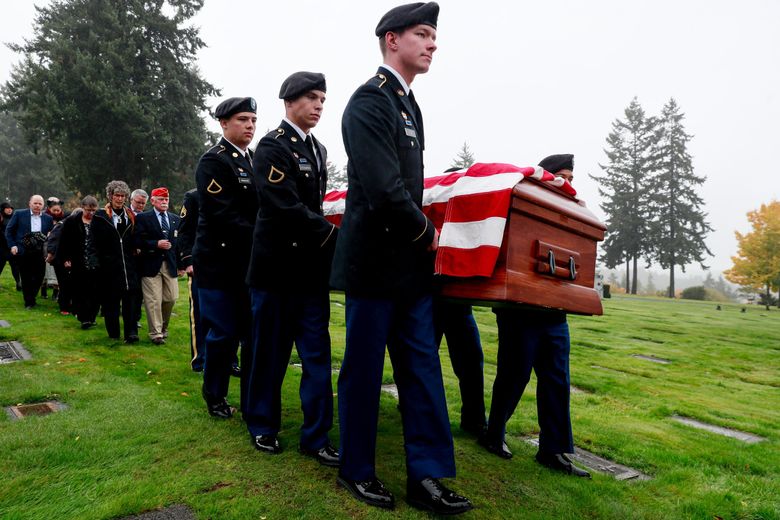 A military funeral honors team carries the casket of Army Pfc. Donald E. Mangan during a military funeral in Gig Harbor Tuesday. Mangan was killed in Europe in 1944 and buried there. The family of Mangan walks behind, including Julia Mangan and her husband Jim Mangan, a Marine Corps veteran, seen in front. (Erika Schultz / The Seattle Times)
By
Nicole Brodeur
Seattle Times staff reporter

GIG HARBOR — It made sense that some of the mourners were smiling, looking more like they were welcoming someone to the family rather than saying a graveside goodbye.

After 75 years, Army Pfc. Donald E. Mangan had finally returned from World War II, and was about to receive his due: A formal military funeral that honored his service and sacrifice.

But Tuesday’s service also introduced Mangan to the family he never knew: a group of relatives who felt relief and comfort sitting a few yards away from his casket, under a tent set up against a steady mist on the sprawling grounds of the Haven of Rest Funeral Home, Crematory and Memorial Park in Gig Harbor.

“The man is finally home,” said Kris Mangan, one of seven nieces and nephews who came from across the country to honor their uncle, who was buried beside their father — Donald’s brother — James Mangan, and their mother, Marjorie.

“He died before most of us were born,” she said, “but we knew there was an Uncle Donald who died in the war.”

Mangan, of Elkton, South Dakota, was 26 and an Army private first class when he was killed by German troops on Sept. 17, 1944, in a spot in Western Germany simply known as “Hill 298.3.” He was buried near the site in a grave with a dozen other American servicemen, the grave dug either by German servicemen or civilians.

Mangan was one of 400,000 Americans who died in the war, and among the 72,000 soldiers unaccounted for at war’s end. He never married or had children.

Late last year, the Defense POW/MIA Accounting Agency — which has a laboratory at Joint Base Pearl Harbor-Hickam in Hawaii — identified Mangan’s remains. The agency contacted Mangan’s nephew, Jim Mangan, 79, of Coeur d’Alene, Idaho. He was the next-oldest living relative willing to decide on burial details after a 100-year-old relative declined.

Jim Mangan decided that Donald Mangan’s remains should be interred near family in Gig Harbor.

Dad would be very happy. He was all about family. To have his little brother there, to be able to take care of him.” <em>— David Mangan</em>

Ron Winter of Haven of Rest had only three available plots out of the 3,000 in that area — all quite far from Lot 67, where James and Marjorie Mangan are buried.

Then, a few weeks ago, a family called Winter and said they wanted to sell back three of their plots. One of them just happened to be Lot 68, right next to James and Marjorie.

“I called and said, ‘Jim, you’re not going to believe this,’ ” Winter recalled. “It’s just surreal. Thousands of burial spaces, and the space right next to the brother opens up. It all feels miraculous to me.”

But it all makes sense to David Mangan, who flew from Washington, D.C., for his uncle’s service: “Dad would be very happy. He was all about family. To have his little brother there, to be able to take care of him …”

“Dad can tell him his corny jokes,” added another nephew, John Mangan. “But really, you just have a good feeling that the story is all sewn up now.”

It was even better that the funeral was held on their parents’ wedding anniversary.

“Look at our family,” Ellen Mangan, another niece, said Tuesday. “Look at how everyone shows up.”

The siblings didn’t know much about their uncle because their father didn’t talk about him, other than to say he was lost to a war that he himself had seen and survived, but didn’t care to discuss.

The service included a rifle salute that crackled through the misty air, jolting some of the mourners. The flag draped over the coffin was folded with a comforting precision and presented to Jim Mangan’s wife, Julia. The family plans to pass the flag — and a shadowbox of their uncle’s medals, including a Purple Heart and a Bronze Star — down through the family.

Idaho Army National Guard 1st Sgt. Sean Rash came from Idaho to serve as a liaison between the U.S. Army and the family. Mangan was fitted with a uniform, Rash said, and wrapped in an olive-green wool blanket. He was transported from Germany to Omaha before arriving at Seattle-Tacoma International Airport Friday night, where he received a military escort to Gig Harbor.

“I think this stands witness to what America does,” Rash said of the service for a soldier killed in battle 75 years ago. “I think we’re the only country in the world that goes to the extent we do to bring back those who have been lost. It’s humbling.”

As a military bugler played taps, niece Kathleen Mangan, of Birch Bay, Whatcom County, removed her glasses and wiped away tears for the uncle she never knew.

“I’ve been tearing up for the last few months, thinking of this kid in his 20s,” she said. “The whole process has been a sad one for me. So much was lost. We never got to know him. He died so young. It really did bring so much home. It’s been emotional, all the lost possibilities.”

“It brings some closure, just to kind of … ,” she said, then paused. “War is kind of stupid. We’re bringing everybody together here.”

As Mangan’s coffin was lowered into the ground, a man stood in the back row, saluting. Afterward, he also said he didn’t know the Mangans. He was a firefighter who had come alone to pay his respects. He didn’t want to share his name.

“I just wanted to make sure,” he said, “that there were people here.”