Chief executive officer of Maryland-based X-energy, Sell aims to bring the project online by 2028 as part of a broader attempt to develop safer, more flexible reactors to redefine the nation’s energy future.

These efforts have gained support in the nation’s capital where many Democrats eager to make progress on climate change have joined with Republicans to funnel money into development. The federal Energy Department has received $160 million to help fund X-energy, and the infrastructure bill that cleared Congress on Friday ups that amount to cover almost half the projected $2.2 billion cost of the Washington reactor project.

“We believe what starts here in Washington is going to change the world,” Sell said to public-utility officials gathered Oct. 28 in Kennewick.

X-energy is one of three companies with ties to the Pacific Northwest that have received federal funds to help develop a new generation of small nuclear power plants, which — since they make electricity without direct combustion of fossil fuels — could aid in the global effort to drive down climate-warming greenhouse gas emissions.

X-energy, along with Bellevue-based TerraPower, founded by Bill Gates, and Portland-based NuScale, proposes reactors that can ramp up and down their electrical output much more rapidly than the large reactors now operating. This agility could help keep electrical grids in balance as more wind and solar power comes online.

TerraPower plans to build its project at the site of a Wyoming coal plant in a partnership with a subsidiary of PacifiCorp, a private utility. NuScale is proposing a project in Idaho and has considered eventually locating a unit in Washington state.

The nuclear industry, in the Pacific Northwest and elsewhere in the nation, has a history of pitching, and sometimes starting, projects that fail to come to pass. Skeptics say these next-generation projects are being oversold and face big challenges in producing competitively priced power without compromising safety and security, and in a time frame soon enough to help reduce carbon emissions by midcentury.

“I’m frankly speechless at the success that the proponents of these plants have had in bamboozling … a lot of government officials,” said Peter Bradford, a former member of the Nuclear Regulatory Commission and former chair of the Maine and New York utility commissions. “They should be shouldering a much heavier burden when it comes to the credibility of what they are saying.”

The NuScale project in southern Idaho involving small reactors cooled by water is furthest along in development, and has struggled with delays, design changes and escalating cost projections.

NuScale has partnered with a Utah-based utility consortium to develop what initially was proposed to be a power plant with 12 small reactors. The project, which is now forecast to cost $5.1 billion, has since been scaled back to six reactors expected to start coming online in 2029, according to LaVarr Webb, a spokesperson for the Utah Associated Municipal Power Systems.

Though Webb says sign-ups to take power are “going very well,” some utilities have had second thoughts and pulled out of participation in the project. As of early November, the consortium had secured contracts to take 22% of the project’s proposed 462 megawatts of power. 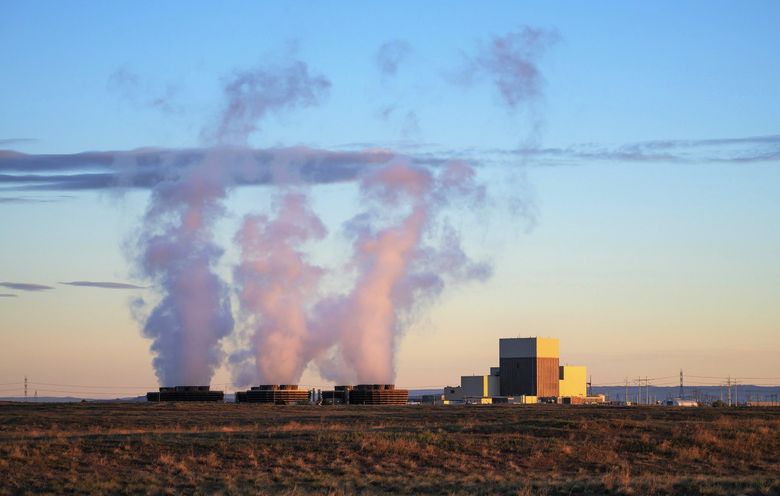 Sell has found fervent support for X-energy in the Tri-Cities area, the hub of Washington state’s nuclear industry that has long been buoyed by billions of taxpayer dollars flowing into the cleanup of the federal Hanford site, where plutonium produced for U.S. atomic bombs has left a toxic, radioactive legacy.

The Columbia Generating Station, Washington’s only commercial nuclear power plant, is located at the edge of Hanford. And its operator, Energy Northwest, would manage the X-energy reactors under an agreement announced last year.

A third partner is Eastern Washington’s Grant County Public Utility District, which would own the reactors and be responsible in raising about $1 billion in financing.

This utility boasts an abundance of low-cost hydroelectric power, which has attracted to the county Microsoft, Intuit and other companies that require lots of electricity for data centers and other operations.

But this partnership is a work in progress.

Nordt said that the utility district also is considering an alternate site project in Grant County and is exploring another option to partner with NuScale.

The costs of power produced by next-generation nuclear are a key concern and source of uncertainty.

Over the past decade, the cost of renewables has plummeted. But, unlike wind and solar power, nuclear can be fed into the grid whenever needed, and for long as needed. That makes this power more valuable, Nordt said. Still, he says a more in-depth financial review is needed, and Grant County might decide not to move forward with any of these projects.

“We may say, ‘You know, hey, the nuclear path was looking favorable, but it’s not for us right now.’ That’s a possibility,” said Nordt, who previously worked at Energy Northwest. “I’m not saying it’s a high likelihood.”

X-energy was created by Kam Ghaffarian, an entrepreneurial Iranian immigrant who founded a major NASA contracting company and other ventures. In 2009, he turned his attention to nuclear power to help deal with what he viewed as a planetary crisis caused by climate change.

He seeks development of a helium gas-cooled reactor that can operate at higher temperatures, which he says could enable more efficient generation of electricity. This technology has been around for decades but has never been widely used in the U.S. The company, under a Defense Department contract, also is developing small portable reactors.

Ghaffarian in 2019 recruited Sell, a veteran Washington insider who had served as deputy energy secretary in the Bush administration.

When prospecting for a place to put the first project, Sell says he was drawn to Washington, in part, by a law passed in 2019 that calls for all fossil-fuel-generated power to be off the state grid by 2045.

“That is the most transformative thing that has happened in nuclear-energy markets in the United States because it has created the commercial framework to succeed, and succeed wildly,” Sell said in March congressional testimony.

X-energy’s four reactors would be able to generate 320 megawatts of power, less than one-third the amount of the roughly 1,200 megawatt capacity of the Columbia Generating Station.

The project, with a reactor dubbed Xe-100, would be the state’s first new nuclear power development since the 1970s, when the Washington Public Power Supply System — the initial name for the Energy Northwest utility consortium — tried to build five large nuclear power plants but finished only one in a disastrous effort based on flawed forecasts of future power demand.

The unfinished plants left a bitter legacy — including the largest municipal bond default in U.S. history and, among some, a deep mistrust of the nuclear power industry.

One of the most visible reminders of the Washington Public Power Supply System, which detractors nicknamed “Whoops,” is a massive concrete-domed building that dominates a 100-acre tract close to the Columbia Generating Station. This was supposed to be WPPSS No. 1 but construction halted in 1982 when it was almost 65% complete.

X-energy’s proposal submitted to the Energy Department calls for installing the reactors on 22 acres of this site, which already includes water intakes from the Columbia River.

X-energy’s website promotes the helium-cooled reactor as safely producing electricity “in a process that’s as clean as wind and solar.”

The reactor operates at much higher temperatures than the water-cooled nuclear plants now in operation. It is stocked, like a gumball machine, with the pebbles, each of which holds thousands of fuel particles.

The uranium in these fuel particles is enriched to increase the level of the fissionable U-235 isotope above 15%. This is far below the roughly 90% level required for atomic bombs but still more than triple the level of enrichment for the fuel of current generation reactors.

The heart of the safety case is the design of the fuel, which tucks the kernels of uranium inside three protective layers of carbon and ceramic-based materials.

This is called TRISO fuel. The federal Energy Department calls TRISO the “most robust nuclear fuel on earth.” X-energy claims on its website the fuel retains waste and prevents meltdowns entirely.

Sell, in Oct. 28 remarks in Kennewick, said that this safety enables a dramatically simplified design that results in big cost savings. “I’m talking about a reactor that has one-tenth the number of required safety-related systems on it compared to Columbia Generating Station,” Sell said.

The claims of a meltdown-proof fuel are dismissed as “absurd” by Edwin Lyman, a physicist with the Union of Concerned Scientists who has researched nuclear reactor safety for many years.

Lyman questions whether the X-energy reactor would be safe enough to justify a design that does away with costly leak-tight containment buildings standard for the current generation of water-cooled reactors.

He says the safety of TRISO fuel requires the ability to consistently manufacture it to exacting standards. So far, he said, that has not been demonstrated in the United States.

In a report he published this year, Lyman notes a 2019 test of the fuel at a national laboratory in southern Idaho “had to be terminated prematurely” when monitoring indicated “the fuel began to release fission products at a rate high enough to challenge offsite radiation dose limits.”

If the project moves forward, Lyman calls for the Nuclear Regulatory Commission to take a more cautious licensing approach that would first approve the reactor as a prototype before moving into commercial production.

“A lot of the rationale for why you would embark on this journey is not supported by the evidence,” Lyman said.

“I’ve known Ed for a long time,” Sell said. “He’s committed to his anti-nuclear positions. That particular report, as it was related to us, relied on public information that is no longer current or relevant.”

X-energy’s project in Washington also is receiving pushback in from a Northwest tribe.

The Confederated Tribes of the Umatilla Indian Reservation does not support placing small modular reactors such as those proposed by X-energy or any new nuclear missions at Hanford, according to an Aug. 6 letter to the Energy Department from the chair of the tribes’ board, N. Kathryn Brigham.

The federal Hanford reservation includes areas that rank as the most contaminated nuclear sites in North America. The massive task of treating 177 tanks storing a perilous brew of radioactive and chemical waste, some of which are leaking, represents a huge cleanup challenge.

The letter noted that 1855 treaties ceding millions of acres of land called for the preservation of important rights, including hunting, fishing and gathering. Hanford is partially within these treaty territories, and new reactor development could impact those rights and resources, said Brigham’s letter, which called for consultation to discuss the federal government’s trust responsibility under the treaty.

The tribes’ concerns are shared by the Columbia Riverkeeper, a Northwest environmental group that released a September report blasting small nuclear reactors as an “unacceptable solution to climate change.”

X-energy has yet to apply for a Nuclear Regulatory Commission license to operate the reactor, a complex process that includes an extensive safety review, according to Scott Burnell, a commission spokesperson.

“This has to be competitive”

In the months ahead, drilling for soil samples is expected to begin at X-energy’s Columbia River site.

Construction could begin by 2024, according to a tentative timeline.

At the Kennewick meeting organized Oct. 28 by Energy Northwest, there was plenty of optimism. Grant County’s Nordt, appearing on a panel with Sell, talked about the value of a flexible source of nuclear power. And he urged other utility officials to consider signing up to take some of this power.

But in a state where the earlier financial problems of the Washington Public Power Supply System still cast a shadow, any move by a utility district to finance a new nuclear project will get a lot of scrutiny.

“This has to be competitive. We’re not doing this because we think the technology is cool,” Nordt said. “This is our customer’s money, which we take very seriously.” 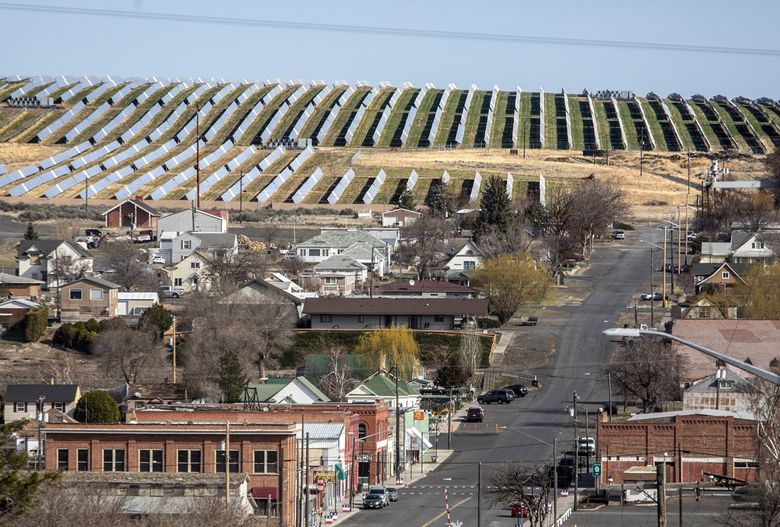