The cedar’s broken, silvered top pierced the soaring forest canopy and its trunk flared to a magnificent fluted column.

The trunk was so big around that a cavity at its base easily fit four adults crawling inside to wonder at a snug bear’s den.

There was a time and not very long ago that trees like this cloaked the Northwest coast, from Southeast Alaska to B.C. to Washington, Oregon and Northern California. But since the time of European settlement, about 72% of the original old-growth conifer forest in the Pacific Northwest has been lost, largely through logging and other developments. 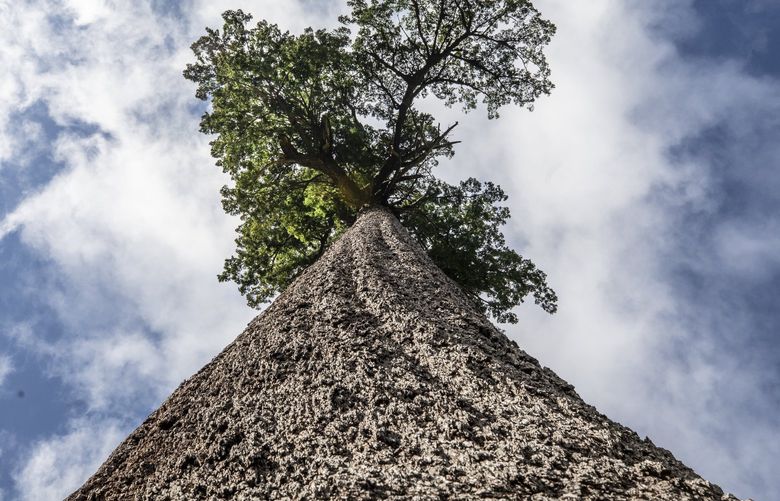 Forest preservation, here and elsewhere in the Northwest, has a new urgency. Scientists and researchers are calling for preservation of old-growth forests, and to grow more by leaving alone mature trees in natural forests — a crucial defense against climate warming that poses catastrophic risks to humanity and all of biodiversity as we know it today.

“The Pacific Coast produces these magnificent forests,” said Suzanne Simard, professor of forest ecology at the University of British Columbia.

Because of their low elevation, coastal location and species mix, these forests are some of the most productive in the world, growing long-lived species such as Douglas fir, Western red cedar and spruce to immense size. Fire is rare. Temperatures are mild. And a sea-born soaking of fog and rain drenches the land.

”That is why we call them rainforests,” said Simard, packing her soil-sampling shovel along for a hike last fall into this rainforest, where massive mother trees, as Simard calls them, some standing as long as 1,000 years or more, cast deep shade even on a brilliant late fall day.

Now mostly gone outside of parks and other protected areas, the last of these forests are at the center of a battle that has continued since the summer of 2020 to save what’s left.

The conflict that has flared these last two summers — and is gearing up again this spring — actually started long ago, with colonization and the exploitation of primary forests everywhere, including in Washington state.

It is not even the individual trees, such as the approximately 1,000-year-old bear’s den cedar near Port Renfrew, at the south end of Vancouver Island, that are so remarkable. These forests are best understood as communities of beings by the billions, interconnected in a constellation of lives above and below ground, all nurtured and sustained by these trees.

“This is the gold”

The wild forest scheduled to be logged here is not a place that is walked, but rather slowly traversed on its terms, including crawling on all fours across the broad backs of fallen logs, or scooting down slopes so steep they can’t even be goat-walked.

Pools and streams and springs course and seep and drip. The waters sparkle with clarity and are achingly cold. Moisture glazes the rocks with an ineffable shine. The air is scented with wet, the tread underfoot softened with it. The tiered branches and filtered light create a realm of soft sounds and the feeling of a living dream of green, blue and brown, one ridge and hill of forest easing to the next.

There are trees from sprouts to the ancients that have gained a look attained only at great age. Their bark flakes and shreds, and trunks soar to an apse raised over centuries.

The soil is darker than coffee grounds, inky, sweet and redolent of fructifying forest funk.

“This is the gold,” Simard said, as she crumbled the soil in her hands, and teased apart filaments within it, finer than a human hair.

These are fungal threads. Simard discovered in pioneering research they wind through these soils in a web of connections from tree to tree, sharing nutrients and water.

It was 25 years ago working on little more than a hunch that she headed into the woods of B.C., packing plastic bags, duct tape — and radioactive carbon dioxide gas. She injected the gas into the bags placed over tree seedlings and, while dodging a grizzly bear and cub, what she picked up on her Geiger counter was evidence of trees passing nutrients below ground in mycorrhizal fungi connecting the roots. Forests, she has revealed in further research, aren’t just collections of individuals competing with one another, but also cooperative societies of a sort. The larger trees act as hubs, connecting trees in a complex system.

In addition to competition and even hostile interactions, Simard and others have revealed that trees also can recognize their own kin in seedlings they preferentially shuttle nutrients to, through the fungal network. In research published in the New Phytologist in 2016, Simard and her collaborators demonstrated carbon transfer — crucial food — was three to four times greater in kin than in nonkin pairings of Douglas fir seedlings. Kinship increased both the likelihood of establishment of a symbiotic relationship between kin linked by a fungal network, and its robustness.

Her understanding keeps expanding, with work that reveals connections beyond the trees, even to other species, including salmon and bears.

The soils were so deep there that with her shovel, Simard couldn’t find the bottom. Here was a parfait of chocolately richness that took ages to create. Trees that take centuries to grow take even longer to die. Their wood slowly melts back into the soil, as a vast community of decomposers breaks the wood down, nurturing a new cycle of life.

The amount of carbon stored in the soils, roots, trunks, branches, leaves and needles in mature forests is unmatched in young, even-aged industrial plantations.

In addition to their ability to store carbon, it is the complexity of these forests that sets them apart, a mix of species and ages and structure that boosts biodiversity.

The understory is a tangled web of life. Roots are humped and reach over rocks. Standing grizzled snags are chipped and drilled and caved with nests and dens for everything from birds to bears. Devil’s club, huckleberry and ferns crowd into sunlit open patches and wet seeps.

Unlike a timber plantation, a wild forest like this is anything but one thing. It is big old trees. Young trees. Understory. Dense, gothic, shady redoubts. There also is a mosaic of species: firs, cedar, hemlock, spruce. Deciduous vine and bigleaf maple. And more.

This is particularly so in old-growth forests. With their broken branches and tops, the canopies of these forests form tiers and gaps, where ancients have fallen and sunlight pours onto the forest floor.

There, young trees await their chance to be released at last to surge into the light. Soils are fed by nitrogen dripping from lichens in the canopy in abundant rain in one of the wettest nontropical places in the world, with some 5 to 11 feet of rain a year.

These forests also are weather makers, combing fog from the western winds and soaking up rain, and returning clouds of damp to the air from billions of needles and leaves as trees create their own food from thin air by photosynthesis. They also cycle moisture by holding it and bringing water to the surface with the hydraulic lift of their roots.

In this cool forest damp is nurtured a fairyland of fungi, aglow in the dank underbellies of logs, nooks and crooks of branches. Bark is fringed and bearded with lichen, and trunks are aglow with an icing of molds, slimes and moss.

Some of the communities of species here are found nowhere else, from rare speckle bellied lichen that provides nitrogen to these soils, dripped by rainwater through the canopy, to marbled murrelets, a rare sea bird that nests only in old growth.

Western Washington once was cloaked with primary forests like this, too. Citizen scientist Tom Schroeder of Poulsbo in a series of white papers on the pre-settlement forests of Puget Sound and Southwest Washington attests to the struggle by early surveyors to bring with solar compasses and measuring chain a surveyor’s order to the green chaos they encountered.

A visceral panic and even horror is revealed in a sample of surveyors’ notes from the Willapa country in Grays Harbor County in the mid-19th century, where they encountered “ … unending roughness, broken and mountainous character … everywhere steep and broken, every stream large or small has cut a very sharp and steep gorge … sharp backbone ridges extending in every direction … exceptionally difficult to survey … not worth a Continental Dollar per township … so dense that sunshine never reaches the ground … always green and wet … underbrush cannot be described …”

They were wrong of course.

Far from not being worth a Continental dollar, these forests, some cut now three times in the productive lowlands, helped build the region’s new economy, as settlers and colonizers arrived.

One of their first acts was to begin clearing with rapacious appetite the forests previously burned and cut only lightly by the first peoples of the Northwest. The newcomers brought first hand and horse logging, then industrial scale, mechanized clear-cutting to these forests, feeding a global market for wood still ravenously consuming forests.

Still at risk are unprotected big-treed forests, some with 10% to less than 1% of their historical old growth remaining. The provincial government has proposed deferring harvest of some of its remaining unprotected old-growth forests. But the deferrals are still under discussion. And deferrals do not offer permanent protection.

Not far from where Simard sank her shovel, the forest was being cut to the ground.