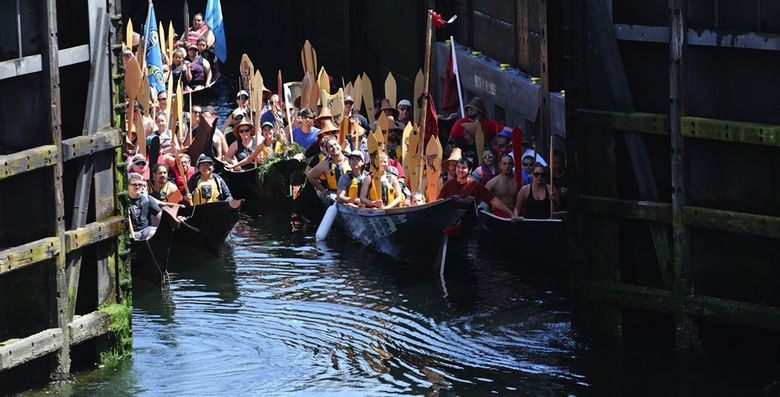 Canoe families representing local tribes exit the small lock on May 21 on a paddle from the University of Washington to Golden Gardens. (Steve Ringman / The Seattle Times)

A century ago, the construction of the Hiram M. Chittenden Locks reworked the land and water of Seattle and its environs for development, displacing the indigenous cultures and the natural abundance of the landscape.

It was a bold engineering feat, a re-plumbing, re-routing and re-purposing of land and water in and around Seattle.

Come July 4, Seattle will commemorate the 100th anniversary of the Hiram M. Chittenden Locks — also known as the Ballard Locks — and the Lake Washington Ship Canal that provide easy access from the city’s interior lakes to Puget Sound and the wide, beckoning sea.

The rework of land and water led to much of the remake of Seattle and its environs, including extensive development along the shores of lakes Washington and Union as well as two floating bridges connecting the region.

Yet there is another story beyond what we see today, still embedded in the landscape and waterways in and around Seattle.

As Warren King George, historian for the Muckleshoot Indian Tribe Preservation Program, looks out over his ancestral homeland at Lake Union, a seaplane zooms from the thicket of buildings that supplanted forests of cedar and fir. Kayakers float by. But what King George sees is the place that his ancestors noted was good and deep for launching canoes. He sees where the cattails, used for weaving tule mats for temporary shelter or bedding, grew thick.

“Everything was here in this little piece of heaven, there was no need, no wish to go anywhere else, unless there was a craving for a flounder or a nice fat butter clam,” King George said. Then, a quick portage to saltwater was all that was required.

Explore more history of change created by the Ballard Locks

• “Making the Cut” commemorates the centennial of the Lake Washington Ship Canal.

• Watch Mikala Woodward as she walks and chalks the old Lake Washington shoreline in “Drawing the Line.”

The U.S. Army Corps of Engineers, which built, maintains and operates the Locks, lowered Lake Washington nearly 9 feet, and permanently cut off its outlet to the south, the Black River, once a salmon highway to the Duwamish.

Development of the Locks reduced freshwater marshes and wetlands in the Lake Washington system from 1,100 acres to 74; today three-quarters of the lake’s shoreline is hardened with bulkheads and docks.

Engineers have limited change in the lake level to two scheduled feet a year.

It used to be 7 feet, when natural cycles of spring high water from mountain rivers coursed into Lake Washington. That was vexing to farmers, who petitioned to control natural flooding.

Yet Indian weirs for catching fish exposed when the lake levels dropped are testimony to the abundance that once was here, the natural wealth displaced for today’s development.

“Don’t get me wrong,” said William Dowell, Corps spokesman at the Locks. “I love the Locks. But they would never be built today.” Our Ship Canal has provided a century of connections

• Boat Parade: 11 a.m. to 2 p.m. July 9. A flotilla of boats and ships will parade from the Ballard Locks into Lake Union in commemoration of the centennial of the Ship Canal opening. The Centennial Boat Parade will roughly re-create the original parade that marked the official opening on July 4, 1917. Storied vessels such as the S/V Adventuress, the yachts Honey Boy and Glory Be, the Virginia V, the halibut schooner Tordenskjold and others will participate.

• Book launch: 7 p.m. July 12, Museum of History & Industry. Amid much fanfare and after more than 60 years of planning, the Lake Washington Ship Canal opened to the public on July 4, 1917. Join co-authors Jennifer Ott (HistoryLink.org historian) and David B. Williams (author of “Seattle Walks”) as they share stories from their new book, “Waterway: The Story of Seattle’s Locks and Ship Canal.” Learn how industry, transportation, and the very character of the city and surrounding region developed in response to the economic and environmental changes brought about by Seattle’s canal and Locks. Cost: $10 for MOHAI members, $15 for nonmembers.

About 40,000 boats cruise through the Locks each year, making them the busiest for boat traffic in the country. More than 80 percent are recreational craft — from kayaks to giant motor yachts and everything in between.

U.S. Army Corps of Engineers lock operator Joey Cavallaro on a recent busy afternoon used a chamber longer than the Space Needle is tall to ease an oceangoing tug on its way to Alaska. One of the Argosy Goodtime tour boats came into view, ready to head the other way, along with a parade of yachts, fresh-scrubbed and shining. The recreationals pay no fee and lock through on demand.

The Locks never detonated the industrial boom on Lake Washington that its developers hoped for. But a recently released study credited the Locks with thousands of jobs and hundreds of millions of dollars of economic benefit. They also are the third-biggest tourist draw in Seattle, with 1.3 million visitors a year.

The gaiety is jarring to the dispossessed.

On a recent visit, King George stood at the Locks and watched the tourists amble. A train rumbled over the 1914 Salmon Bay Bridge, and a Chinook helicopter thumped overhead — two names evoking species nearly lost in the translation to this engineered, straightened, concreted place. For five years in a former job, he counted fish for his tribe at the fish windows at the Locks.

Revenant runs are mourned by tribal and sport fishermen alike, who crave bigger fishing seasons today coaxed with hatcheries, habitat repairs and other supports. There hasn’t been a sport season for Lake Washington sockeye since 2006. Tribal fisheries are reduced to remnants.

The Locks were a hard place to work as a fish counter, King George said. “It was like a petting zoo, a circus, the sea lions doing what we call a shake and bake, just shredding the adults while the seagulls devoured the (juveniles). The tourists loved it. To us, those are our relatives,” he said of the salmon. “It was horrible.”

Yet even with about 1.4 million people now crowded into vastly altered landscapes and watersheds, the native connection abides here like a throbbing phantom limb. “They can build the biggest skyscraper,” King George said. “It doesn’t change our relationship with this place.”

Leonard Forsman, chairman of the Suquamish Tribe, said that on some days when the light is just right, the landscape reveals its layers. “The land has a certain amount of memory in it,” Forsman said. “When people are in the city they are looking out on the waters that our people have lived on for thousands of years. If you look just right, you can feel the power of ancestral knowledge and the stories that go along with that, the ancient landscape.”

A narrow river, the Black — formerly Lake Washington’s natural outlet at present-day Renton — was a natural fish weir that concentrated the abundance of salmon where the Duwamish people lived. One village site persisted there for at least 1,400 years.

“It was Wall Street; no, that is too small, it was Chicago, it was a wealth uncounted,” said Ken Workman, a Duwamish tribal council member. “When the Locks went in, that was a sad day for us.”

Duwamish natives, pushed out of Seattle by white settlement, had retreated to the banks of the Black. They watched its life-giving waters disappear, the salmon flopping as they stranded in drying pools.

“I think of how horrible that was: One minute you are enjoying the river and your family, the next the river is gone,” Workman said. Today the Duwamish still fight for recognition by the federal government.

When Workman comes to the Locks, he sees the burial sites of his ancestors where today there are condos. He feels the physical connection to thousands of years of his people living here, still present in the very earth. Their DNA is in the trees and their roots, and in the oxygen made by the trees, Workman said. “I say, thank you, grandmother; thank you, grandfather.”

He recently joined in a ceremonial paddle held by native people of this place, their own way of marking this centennial. But Workman chose not to paddle through the actual Locks; the prospect made him too sad. A Boeing Company retiree, he appreciates the wealth that development of the waterways brought to the region. But he also feels the loss.

Snoqualmie tribal elder and traditional chief Andy de los Angeles notes, too, the loss of the homestead of his ancestor, Jim Zackuse, near the north shore of Lake Union. Gone from those waters is the portal to the underworld; gone from that place is the spirit power that Zackuse, a powerful Indian doctor, accessed to heal the people.

Historic photos document Zackuse and the last stands of others who clung to the land and its waterways. Salmon Bay Charlie, photographed with a clam basket over his arm, standing amid three white men come to tell him it’s time to move on, is a portrait of dispossession, notes professor Coll Thrush, historian at the University of British Columbia.

As he researched his landmark book, “Native Seattle” (UW Press, second edition 2017), Thrush said, he was surprised to find no mention in early planning documents for the Locks of the native people living in the landscape about to be so extensively reworked. “There are photos of the houses, the evictions, it is not like this was invisible,” Thrush said. “But it was rendered invisible.”

It was assumed, Thrush said, that the indigenous people of Seattle would just disappear. But that is not what happened, in part because of the treaty rights reserved by the ancestors of tribes today rebuilding their cultures and economies.

Philip Red Eagle shaves fragrant yellow cedar with a carving knife, shaping a canoe paddle. A Dakota and Salish tribal member, he wears a necklace with a bead for each of the annual tribal canoe journeys that he has participated in, journeys that draw thousands of Indian people from around the region.

He makes and gives out the necklaces to commemorate teachings and principles of the canoe, including flexibility, respect and sharing.

It’s a code grown beyond mere survival of losses to building a self-determined future. “You have two cultures together like this,” he said, clapping his hands. “We are not leaving. And neither are you.”