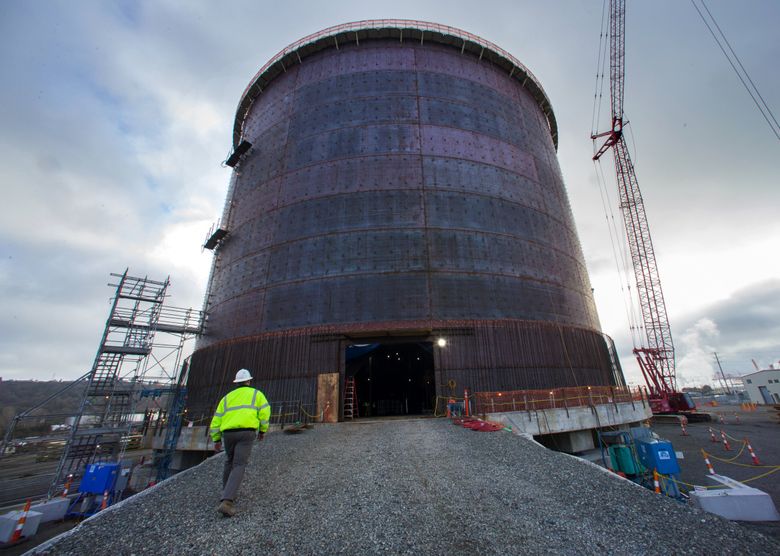 Jim Hogan walks toward the entrance of the tank being built to hold 8 million gallons of liquefied natural gas at the Tacoma LNG plant. (Ellen M. Banner/The Seattle Times)

Puget Sound Energy's plan to build a liquefied natural-gas plant, to provide cleaner fuel for transportation and natural gas to its customers, has turned into a waterfront battle more bitter than anything this city has seen in years. Washington tribes have joined in asking Gov. Jay Inslee to halt the project.

TACOMA — What started out as a proposal by Puget Sound Energy (PSE) to build a liquefied natural-gas plant, to provide cleaner fuel for transportation and natural gas to its customers, has turned into a waterfront battle more bitter than anything this city has seen in years.

So bruised is Tacoma, the city has reworked its tribal consultation policy to ensure and improve early contact with tribal leaders, and banned any future fossil-fuel development on the tideflats while it undertakes a full-on planning review for its most important industrial area.

Opponents have taken up a battle cry of “No LNG in the Salish Sea,” and have turned out to show PSE just how contentious building a new fossil-fuel project in the region can be.

Climate activists and self-described Water Warriors have rappelled off construction cranes, chained themselves to plant gates and erected a tent city on the state capitol grounds. They’ve marched. They’ve erected a longhouse in front of the company’s Bellevue headquarters. Every night, they project the words “No permit No Construction” on the side of the tank, a dig at PSE for proceeding with construction without a pre-construction emissions permit.

A petition drive organized by opposition groups Redefine Tacoma and 350Tacoma has gathered more than 54,000 signatures.

The Puyallup Tribe, an economic and political powerhouse on the waterfront and a major employer in the area, is at the center of the LNG fight and has the support of allied tribes all over the Northwest and even the chairman of the Standing Rock Sioux, recalling the Puyallups’ support in its fight against the Dakota Access Pipeline.

The Tacoma LNG project arrived amid a buzz saw of momentum against fossil-fuel projects already whirring. In 2016, the coal port at Cherry Point was defeated after the Lummi Nation took on the project to defend its treaty fishing rights. That victory emboldened the opposition to the Dakota Access Pipeline.

President Donald Trump’s decision to snub the pipeline opposition and issue an executive order allowing construction to proceed — and his broader rejection of climate change and decision to withdraw from the Paris Climate Accord — has galvanized the resistance to the Tacoma LPN plant, or any new fossil-fuel development in the Northwest, for that matter.

The most recent victories of the movement have been the Tesoro Savage oil-by-rail terminal in Vancouver, Washington. In Tacoma, opponents in 2016 beat back a massive methanol export facility, also planned for the tideflats. Fresh from that win, many of the same opponents turned their attention to the LNG plant, despite its promise of cleaner fuel.

“We are doing this for the community,” said Bill Sterud, chairman of the Puyallup Tribe. “I’m kind of in shock that in this day and age such a facility would be put in.

“We will fight this thing; we owe it to our ancestors, who are still out there. What would they say? They would say we are disrespected, and mother earth is being disrespected.”

A cleaner fuel for ships

Puget Sound Energy, with 1.1 million electric customers and more than 800,000 natural-gas customers primarily in Western Washington, says its $310 million investment in the LNG plant delivers benefits in customer reliability and cleaner fuel for both marine and land transportation. The company wants the plant operational by 2019.

PSE’s plan is to bring natural gas to the facility via an underground pipeline and then cool it to minus-260 degrees for storage. The plant is intended to produce approximately 250,000 to 500,000 gallons of LNG a day and is designed to store up to 8 million gallons in a liquefied state.

About 43 percent of the LNG at the facility would be used to serve PSE’s Western Washington customers when their heating needs peak in cold weather, said Roger Garratt, director of strategic initiatives for PSE.

The rest would be for transportation, with fueling areas both for marine users, and wholesale land-based transportation customers.

Totem Ocean Trailer Express (TOTE), carrying groceries and other consumer goods to Alaska, is the anchor customer for what PSE hopes will be a growing business for ships seeking to convert to LNG, cleaner than fuel oil. New regulations governing shipping emissions are anticipated to create even more demand for LNG.

LNG technology is not new; more than 110 LNG facilities already operate in the U.S. performing a variety of services, according to the Federal Energy Regulatory Commission.

PSE’s facility is the smallest of its type and unusual in simultaneously serving both peak energy needs and commercial transportation uses.

PSE has sought to assure the public it has taken every aspect of safety into account in constructing what is essentially a 149-foot-high, 130-foot-diameter multilayered steel Thermos to hold the frigid fuel, covered in concrete and stabilized against earthquake.

PSE contractors have run safety scenarios with federal regulators and engineers to ensure that the public and its workers — just steps from the silo — would be safe in the event of an fire or other disaster.

“I’m proud of this project. I tell my kids about it,” said Jim Hogan, the consulting project manager for Tacoma LNG, a PSE subsidiary, on a recent tour of the project.

Construction on a 33-acre site owned by the Port of Tacoma between the Blair and Hylebos waterways began in 2016.

PSE markets the project as an environmental step forward and still hopes to win over the tribe.

“We really, really tried with them. They are nice people; we had many meetings at the staff level. We want to be liked; we think we are doing a good thing here,” Garratt said.

The Port of Tacoma has partnered with PSE in the project, signing a 25-year lease charging PSE $146,000 per month during construction, and $212,445 per month once the facility is operational.

“This has been through a very long, years’ long public process,” said Tara Mattina, director of communications for the port.

“We are disappointed,” she said of the controversy. “I just don’t understand this argument that this is somehow harmful to water or air quality.

Puyallup Tribal Councilwoman Annette Bryan said the tribe has met with the city, port and PSE over the years but came away frustrated. Consultation with the tribe was not adequate, she said.

“They disregard what we think and say,” she said of PSE in particular. “And now, here we are. It feels like they are in a rush to finish it. So how meaningful is it to sit down and talk?”

Dean McGrath, president of the local longshore workers’ union, said he is hoping for a breakthrough in the impasse between the company, the port and the tribe, for the sake of the union’s workers on the waterfront.

“We are the closest to breathing the exhaust from the ships; anything that cuts that, we are in favor of,” McGrath said. He sees a lack of communication that led to a conflict that now needs a solution. The project’s success can’t be complete without a good relationship with the tribe, McGrath said. “It’s a very unique port in that way.”

Last April, the Puget Sound Clean Air Agency issued PSE a letter of violation advising the company it is assuming the risk of starting construction without first obtaining a pre-construction emissions permit. The company contested the violation and contends it has only built parts of the project for which it has permits in hand.

PSE also is facing lawsuits by the tribe, and additional environmental reviews.

The tribe has allies in the community.

Tacoma still isn’t having the right conversation about its future, said Claudia Riedener of Redefine Tacoma, a leader of the methanol-plant fight who also has joined the tribe in the battle against the LNG facility. Three Superfund sites and a petroleum tank farm already are in the immediate area of the LNG plant.

“We have had enough. We can’t repeat the same mistakes and have a better outcomes.”

This summer, canoes from all over the region will converge at Puyallup for an annual canoe journey that brings tribes from Washington and across the Canadian border together with their guests for ceremony and song.

The Puyallup Tribe is overjoyed at the honor of hosting, said Chester Earl, chairman of the tribe’s canoe committee. And it recently regained the use of a last bit of natural beach on the tideflats, with the expiration of a 100-year, $1 lease.

But standing on the beach, poking at its black sand, tribal leaders said they also know they must have the beach tested before the tribe can welcome its guests and relations ashore. So much pollution has poured into the tideflats over so many years, they worry even the sand is not safe.

The salmon too are depleted. Tribal biologists struggle to maintain even greatly reduced fishing opportunity today for tribal fishermen who fought tear gas and billy clubs from state fisheries officers in the Fish Wars of the 1970s, defending their treaty right.

Shellfish from these waters are not safe for human consumption. Tribal biologists have found that baby salmon just hours old sampled in the Puyallup River have micro plastic fibers in their tiny bodies, ingested from the surrounding waters.

On the tideflats, Sterud turns to face the water, and squints into its hammered-silver gleam. But instead of the perfection of Mount Rainier shimmering on a clear day, his eye is drawn to the new steel cylinder just built.

“A monstrosity” is what Sterud calls it.

Today, the tribe wants development of the tideflats to go in a new direction. Not a project that while it will provide cleaner shipping fuel, also commits to another $300 million investment in fossil-fuel development.

“At some point we have to start healing it,” said Sterud. For the Puyallup Tribe, that time is now.

“This is about the entire community, and where people want this area to go,” said Sterud, who has been on the tribal council and deeply involved with the port and city and development of the tideflats for most of the past 40 years.

“People want Tacoma to be a livable city, a place where something like this would not even be thought of. It needs to go in another direction. So this is where we are at. And we are not going to back down.”