Blown up along with the mountain was most everything scientists thought they knew about how nature responds to a massive disturbance.

Language strains to capture the violence and scale of the blast. The main eruption would last nine hours, and kill 57 people.

Once the most perfectly conical volcano in the Cascades looming in Southwest Washington, just outside Longview in Skamania County, the eruption cratered the mountain’s lovely top — and lowered it by 1,314 feet.

Following a 5.1 magnitude earthquake, the north flank of the mountain collapsed, triggering a cascade of catastrophic events that smothered, battered and singed the mountain.

A colossal landslide buried 23 square miles of the North Fork of the Toutle River valley to an average depth of 150 feet. The lateral blast from the mountain ka-boomed a scorching cloud of rocky debris that in about three minutes toppled and burned about 230 square miles of forest.

The hot cloud speeding down the snow-clad east and west flanks of the mountain triggered flash floods and mudflows that raced downstream. A muddy slurry in the North Fork Toutle River eventually clogged shipping channels in the Columbia River about 75 miles away. The ash cloud boiling from the mountain rose 15 miles in the sky, snuffed the sun and traveled first across the state, and eventually around the globe.

Scientists swarmed to the mountain right after the blast, bringing with them assumptions of what they would find.

They thought most everything on the mountain had probably perished; that the distance from neighboring unaffected areas would govern recolonization by plants and animals, and how long it would take. Wrong, wrong and wrong.

“Mount St. Helens really punched us in the face,” said Jerry Franklin, then an ecologist with the U.S. Forest Service, who traveled to the mountain with other scientists within 10 days of the blast. He has since become a world-renowned forest ecologist and professor emeritus at the University of Washington College of the Environment. He reshaped modern forestry in the Northwest in part from what he learned on the mountain.

“I was overwhelmed by the scale of the destruction, that was my first impression,” Franklin recalled in an interview. “My second was, there is a lot going on here. I stepped out of the helicopter and I looked down and here was this fireweed shoot coming up through the ash. And all kinds of things crawling around. Ants, beetles. All kinds of activity.”

It was a humbling and thrilling moment, all at once, Franklin said. “I love epiphanies. We think we know. We are going to go out here, it is a moonscape, everything has been destroyed. And then WHACK. OK, we were totally wrong. What brilliant scientists we are. I love that kind of thing.”

Fred Swanson was a geologist with the Forest Service when he hopped aboard the helicopter with Franklin that day. Now a professor emeritus of forestry at Oregon State University, he remembers the shock when he first sat down on Johnston Ridge and dug a small pit in the volcanic deposit.

Amid the grains of volcanic material, tiny fungal threads were already burgeoning. Above ground, ballooning spiders rained in from all directions.

What was unfolding all around him, Swanson said, was a story of winners and losers. Losers were anything present and big on the landscape at the time of the blast. Six-hundred-year-old Douglas fir were snapped and seared. Elk were incinerated.

But for survivors snug in the soil, such as ants and pocket gophers, or still in their winter hideaways, such as the frogs and toads in the mud and lake bottoms, the big blow was a gift. As it was for colonizers — insects, birds, amphibians, reptiles, mammals, seeds and plants arriving from all over, all at once, from every direction, to take advantage of a rare opportunity in the blast zone. For big, open areas are an exception in the Cascades.

Getting it all started were the survivors — the living memory of what was there before the blast. These biological legacies immediately shaped what would come after it. Charlie Crisafulli calls them the mountain’s heroes.

Crisafulli has spent 40 years of his career at his research camp on the mountain as an ecologist at the U.S. Forest Service Pacific Northwest Research Station in Olympia — much of it studying the pocket gopher.

For it turned out the rodents, as they ceaselessly plowed along, were mixing rich forest soils with new volcanic deposits. Biological rototillers, they prepared the ground for plant growth as if trained to the task.

This provided opportunity for another hero, prairie lupine, sprouted from roots remaining in the ground. It prospered in the sunny, open expanse of the blast zone, fixing nitrogen in the soil, improving it for more plants.

Sitka willow rooted along streams, providing delicious food for beavers, shelter for birds and a feast for elk that returned to the mountain. The elk in turn broke up the soil with their hooves, and left fertilizer behind that fed the growing new land.

Blowdown and landslides created a terrain with more than 130 new ponds that for frogs and western toads were a sunlit paradise, without predators. Within no time the densities of toads at Mount St. Helens were stupendous, Crisafulli said. The land seethed with surges of toadlets in spring.

Scientists had expected an annihilation of amphibians followed by a slow recolonization from regions untouched by the blast. Instead, in addition to migrants arriving hop by hop, swarming hordes were spawned by locals that had slept through the whole thing.

The blast zone proved a magnet for life. Vaux’s Swifts were quick to take advantage of a forest of standing dead snags. Today, black bear, cougar, bobcats and mountain goats all are seen on wildlife cameras that monitor the mountain.

Today, Crisafulli has two beefs with ways people often think about the mountain. One is, don’t say the mountain is recovering — because it will never return to what it was before. Rather, it is busily making something entirely new. That leads to his other point.

“People say, ‘It’s been 40 years, what could you still possibly learn?’ ” Crisafulli said. “Well if this were a theatrical production, this would be act one, scene three in a multi-act play.” The drama playing out will continue for hundreds and even thousands of years. In that, Mount St. Helens is a teacher as much as a mountain, protected by an act of Congress in 1982 in the Mount St. Helens National Volcanic Monument, a 110,000-acre redoubt reserved for study, scientific research and recreation. It is a research site of worldwide significance, with the discoveries still coming.

Still unknown are how all those elk, fat and sassy now on the pumice plain, will respond when wolves inevitably make their way back to the land. And how did lunker rainbow trout wind up in Spirit Lake, anyway?

Long suspected to be the result of rogue fishermen that planted the fish, now Crisafulli is waiting on genetic tests to learn if the fish actually are the landlocked descendants of steelhead that made it into the lake after the eruption disrupted the flow of the North Fork of the Toutle. He can’t wait to hear if these rainbows are risen from steelhead, a blast indeed from the mountain’s past.

“It would be just another perfect example of how tenacious and resilient life is.” 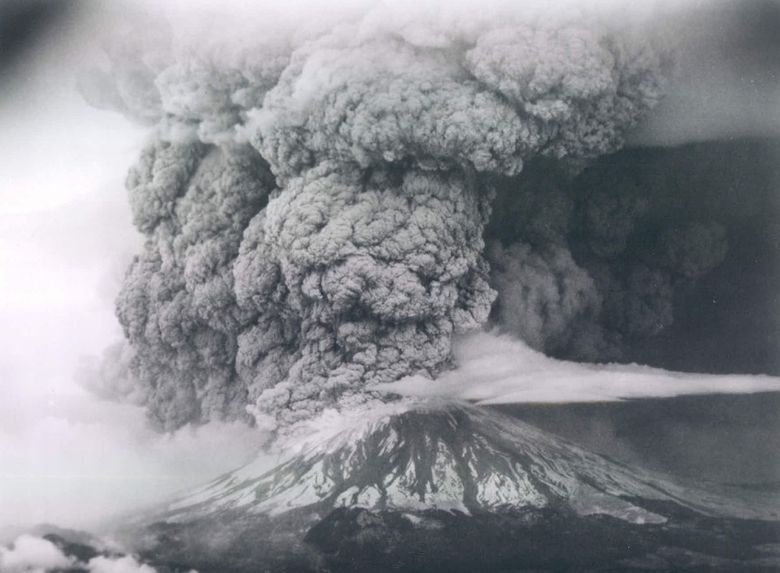 Eric Wagner was 2 years old when the mountain went off. His book “After the Blast” is the latest in an eruption of scientific papers, literature and books since. He was struck in his research by both how tidy all that knowledge seems today, and the incredible risk and effort it took to acquire it.

“You forget what it must have been like to confront that space in 1980, the chaos, it could erupt at any moment and kill you, it was difficult to move around,” Wagner said. He is inspired by the mountain’s lessons. “If Mount St. Helens taught us anything, it is that things work in ways you can never imagine.”