The move is a double whammy to a fleet of about 60 vessels from Alaska, Washington and Oregon pursuing Bering Sea crab in harvests that as recently as 2016 grossed $280 million. Each boat typically employs six to seven people.

“I am struggling for words. This is so unbelievable that this is happening,” said Jamie Goen, executive director of the Alaska Bering Sea Crabbers. “We have third-generation fishermen who are going to go out of business.” 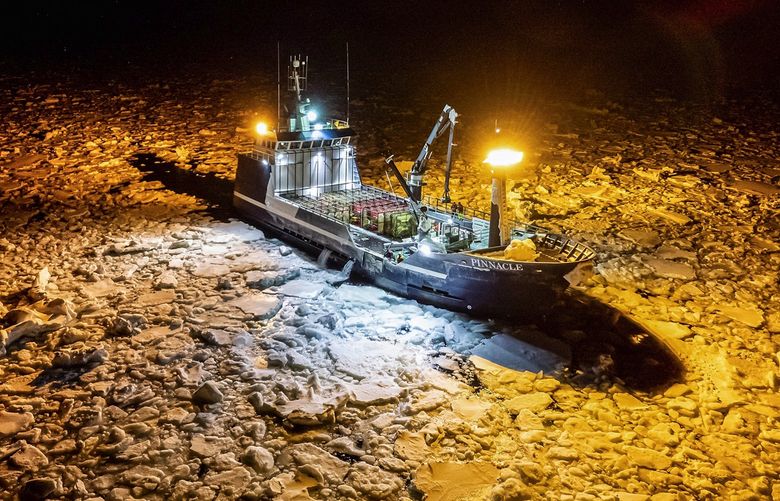 Into the ice: A crab boat’s quest for snow crab in a Bering Sea upended by climate change

The closures reflect conservation concerns about both crab species in the aftermath of bleak summer population surveys. The tough decisions to shut down the snow crab and fall king crab harvests came after days of discussions by Alaska Department of Fish and Game biologists and senior agency officials who faced crabbers’ pleas for at least small fisheries.

“Management of Bering Sea snow crab must now focus on conservation and rebuilding given the conditions of the stock,” the department said in a Monday statement announcing the snow crab cancellation.

Snow crab populations collapsed in the aftermath of a 2019 Bering Sea warming that scrambled the broader marine ecosystem.

As temperatures rose and winter ice cover shrank, Pacific cod populations pushed north. Bristol Bay sockeye, which are hatched in freshwater but migrate into the ocean, thrived through the warming period, and returned this summer in record numbers.

Scientists are still researching the causes of the snow crab population collapse, which likely include increased predation as well as stresses from the warmer water that caused crabs’ metabolisms to increase and could have led to starvation.

Alaska, within the limits of a federal management plan that comes up with an allowable biological catch, determines how many crab are caught.

A scientific model of the snow crab population reviewed last week by the federal North Pacific Fishery Management Council indicated there may have been enough this year for another small harvest. But Ben Daly, an Alaska Department of Fish and Game research coordinator, said the model has struggled to account for the dramatic population decline after the 2019 warming, and state officials were concerned it might not be accurate.

“We have extreme conservation concerns about the population. We have serious doubts about the model,” Daly said.

The fall red king crab harvest was canceled for the second year in a row — a move that reflects the low number of mature female crabs, which although not targeted in the harvest, are an indicator of the broader health of a stock that has been in long-term decline. The survey needs to find at least 8.4 million mature females to greenlight a harvest, and the 2022 survey, though it showed a light improvement from 2021, still fell below that level, according to Daly.

These include pot fisheries targeting cod and bottom trawlers that net yellowfin sole and other fish.

Trawlers that pursue pollock with large nets that bounce along the bottom, potentially harming crab, also do not face new restrictions.

Trawl industry officials say they already have taken some measures to reduce their impacts on Bering Sea crab.

Chris Woodley, executive director of the Groundfish Forum that represents the trawl fleet that pursues yellowfin sole, said operators have modified nets to reduce impacts, and this past year faced new area restrictions as well as a reduction in the number of crab that can brought up in the nets as bycatch.

The North Pacific Fishery Management Council sets allocations and harvest rules for Bering Sea trawlers, which are then implemented — and enforced — by the National Marine Fisheries Service.

Goen, of the Alaska Bering Sea Crabbers, hopes the council might approve some new protections requested by her group at a December meeting.

But she has been frustrated by the council’s slow-moving process, and her group’s inability during the past year to get more done by the council to limit the crab bycatch in other harvests.

“[Owners of] vessels are having to make choices, and with little or no income: some will sell, some will go bankrupt and others will defer maintenance. Safety concerns will only increase as we lose longtime, experienced crew in crab fisheries that know how to keep people safe on deck,” Goen wrote in a Sept. 30 letter to council chair Simon Kinneen.

“The reality is that the council failed to act despite the warning signs.”

Also on Monday, the Alaska Department of Fish and Game announced a small Bering Sea crab harvest of more than 2 million pounds of tanner crab will open Oct. 16.