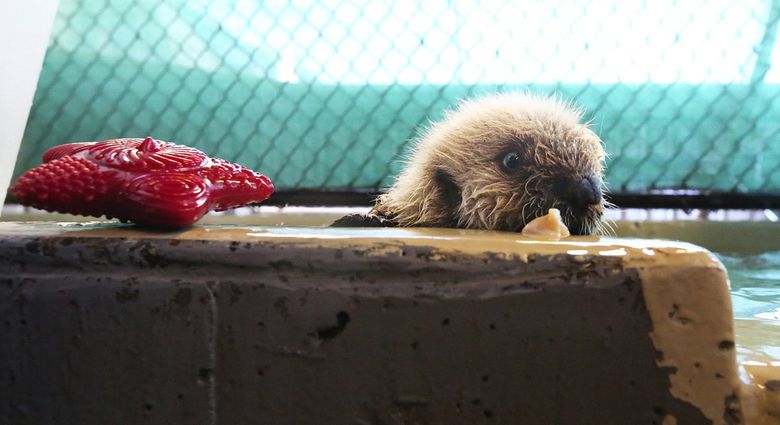 This adorable baby sea otter was stranded on a beach in Olympic National Park. Now 6 to 7 weeks old, he’s being nursed back to health at Seattle Aquarium. We’ll follow Rialto’s journey in the weeks to come, and we’ll also tell the story of the sea otters’ comeback in Washington.

It could have been a crumpled, sandy old towel on the beach. Except that it was moving. And shrieking.

It was a baby sea otter, just a few weeks old. Normally, a baby sea otter would never be separated from its mother for long, carrying her young atop her belly as she floats on her back. But something had gone terribly wrong. This baby sea otter had been cast adrift, alone, on a wide, cold sea. And now it had stranded on Rialto Beach, at Olympic National Park.

“It was a tiny pup, maybe 14 inches long. It was moving, crawling a little bit,” said Joseph Alcorn, a wilderness ranger for the National Park Service who first encountered the sea otter Aug. 1. “The waves would crash over it, and it would be moved up the beach and it was barely strong enough to right itself. It was pretty tragic. I didn’t think it had much more time left.

“It was a baby animal in distress. This pup didn’t look like it would last one more minute, one more wave.”

By the time Dyanna Lambourn, the marine mammal stranding coordinator for the department, got to the beach from Lakewood, Pierce County, it was evening. The pup had been stranded for at least a day, maybe longer.

It wasn’t long before Lambourn saw the otter, still screaming, and still getting battered by the waves.

In consultation with the U.S. Fish & Wildlife Service, which has responsibility for sea otters — a protected marine mammal —  Lambourn was given permission to intervene.

“Knowing picking it up either means we will probably have to put it to sleep, or it’s going in permanent captivity, it’s not an easy decision,” Lambourn said. The third choice was to watch the baby keep struggling, and surely die.

She leaned over and picked up the pup.

As Lambourn drove away, she didn’t know if she would find any vet or aquarium to help. The animal might spend the night in her truck while she kept searching; that had happened before. She might still need to choose euthanasia, as she struck out on call after call. Each time she made a phone call, the pup would scream. And then the Seattle Aquarium agreed to help.

What is the thickest, softest thing you can think of? Think thicker, softer, fuzzier. Add the biggest, brownest eyes. A warm, squiggly body under all that fur. Velvety soft paws. Now add a repertoire of sounds: soft coos, small squeaks, tiny groans. That’s Rialto. Named for the beach where he was found, Rialto is now under round-the-clock care.

Rialto started off in the aquarium’s equivalent of intensive care, a room with no windows, sleeping on a water bed on the bottom half of a medium dog kennel. He snuggled in towels on top of a bag of ice — cool, the way he likes it — with a humidifier tucked in the corner of his kennel, to ease his lungs.

Baby sea otters, even in their mother’s care, have only a 50 percent chance in the wild. Rialto’s chances of survival when he first arrived were much lower.

“He had so many strikes against him,” said Lesanna Lahner, staff veterinarian at the Seattle Aquarium. “He was emaciated, he had GI (gastrointestinal) upset. He had pneumonia. That is a lot. And he had no muscle, no fat, he was just skin and bones. It was really touch and go. I gave him a 10 percent chance.”

Nursed on puppy formula that was fed from a bottle and heated to his body temperature of 100 degrees, he quickly started gaining weight. Before long, X-rays showed Rialto’s lungs were clear and he’d kicked the pneumonia.

On a recent afternoon, he was judged big and well enough to move outside into a holding area usually for river otters. Rialto now lives there amid the sound of sea gulls, and smell of salt air, and a pool, just for him. He often naps atop a bag of ice, holding an ice toy to his chest for comfort.

It costs about $1,500 a day for food and care by a rotating and on-call staff of about six humans to replicate as best as possible an otter’s maternal care in the wild. Staff are helping out from the Vancouver Aquarium, too, to ensure coverage for 12-hour shifts, 7 to 7, every day.

Rialto’s typical day would be recognizable to any new parent: an endless refrain of feeding, pooping, cleaning, grooming, play and sleep.

Rialto at a glance

Weight upon arrival at the Seattle Aquarium: 5.2 pounds

Hairs per square inch: Up to 1 million (the most dense coat of any mammal)

Current favorite food: Raw clams (eats 25 to 30 percent of his weight every day)

Shawn Larson, curator of conservation research and animal health at the Seattle Aquarium, is overseeing Rialto’s care. “I’ve been studying otters for 20 years, and usually only see them through a spotting scope,” she said. Holding him, grooming him, feeding him, she’s watched Rialto get stronger and better each day. “It’s hard to go home, even after a 12-hour shift.”

Lahner says Rialto’s prognosis is still guarded, but his chances of survival have improved to about 80 percent.

Already, Rialto has transformed from a struggling waif to He Who Will Not Be Ignored.

Thursday morning, he had woken up early. He was reposing like an emperor on caregiver Julie Carpenter’s lap. Usually the aquarium’s associate curator of birds and mammals, she was two hours into her day shift with Rialto.

“First shrimp!” she said, offering a raw chunk. Then clam, then more shrimp and more clam. He’s learned how to take a bit of clam on his paw and feed himself, but today, he seemed to enjoy the lap of luxury, as Carpenter snuggled him in a towel, and fed him as fast as he wanted to eat. Which was chunk after chunk after chunk.

When he turned away from a few proffered shrimp, she tried putting him back in his kennel. But Rialto, frisky and still wanting to play, would have none of it. Both paws up on the edge of the kennel, he hauled and heaved, trying to get out, keeping up an ear-piercing shriek all the while.

“OK! You don’t want to be in here, do you?” said Carpenter, pulling him onto her lap, and continuing to groom him from his first morning swim with a fresh towel from the constantly replaced, clean, dry, folded stack.

Most attempts to rescue sea otters by untrained people end in death or injury to the animal and often result in injury to the would-be rescuer. You and the animal will both be better off if you seek help from a trained wildlife professional. It is always illegal for anyone to touch a sea otter or other marine mammal, which are protected by federal law, without authorization from a wildlife authority.

Call the following numbers to report the stranding of a live or dead marine mammal:

Washington Department of Fish and Wildlife

“OK!” said Carpenter, and back in the pool he went. Master of his tiny universe, he steered around the pool with his thick furry tail, thrusting with his flippered back feet to nail the turns. He nuzzled the fresh, cold, filtered seawater from Puget Sound coming into the tank from a pipe, tooled around for a lap or two, and stuck his head under water, blowing bubbles. He twisted his shoulders, trying to execute a roll onto his back. So on the verge, but not yet.

He looked over to Carpenter, who placed a chopped clam on the ledge of the pool. She supported his belly with one hand while he snacked. Eventually he hauled himself up on the ledge, looking ready to get out, and Carpenter was ready with the towel.

They groomed his fur together, she with her towel, and he with his muzzle, pausing now and then to shake his wet head like a dog. His natal pelage, so fuzzy and soft, requires hours of grooming every day to keep him warm and dry. He’ll molt this youngster’s coat soon and lose his light brown coloring, for the darker brown, sleek fur of the adults. Or so everyone hopes.

Living in the moment

What’s next? A move to sea otter holding, with its bigger pool? Perhaps see if Lootas, a grandmother in the aquarium’s adult sea otter clan, will adopt him as a surrogate mother? Or even move to the Vancouver Aquarium, where there is room for Rialto to permanently live? (Update here.)

For now, his tasks are just to sleep, gain weight, and play. And sleep some more. As much as 14 hours a day. And eat, eat, eat.

“He’s getting more meat to his bones, so much more than when he first came in,” Carpenter said, smoothing the fur on his rounded belly. She tried once more to put him back on his water bed, waiting to see if Rialto would again shriek objection.

“He looks so much brighter, and he has an opinion about everything,” Carpenter said. “Which is good.”

But this time, Rialto groomed a bit, then quieted. He reached out a paw for an ice toy. Time for a nap.