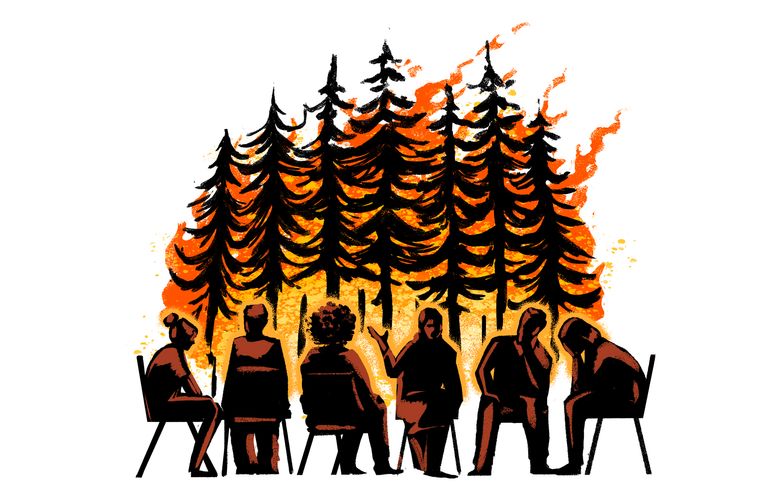 The session began with deep breaths.

“Close your eyes and really be here,” said Barbara Young, a physical therapist. “Allow yourself to land.”

On a Wednesday evening this fall, about a dozen people sat inside Young’s Wallingford studio in attendance of the Seattle Climate Change Meetup Group, which most had discovered online.

They had come with worry, apocalyptic fears, but also hope.

“I’m here because I’m tired of being terrified of the future,” said attendee Janet Munin, an administrative coordinator at Kaiser Permanente, during introductions.

The three organizers of the meetup, called Reversing Global Warming: Introduction to Drawdown, were neither policy experts nor climate scientists.

Scott Henson had recently quit his job as a tech executive and reoriented his lifestyle around fighting climate change. Kathy Dawson, a retired engineer, felt compelled by her Christian faith to be a steward of the Earth. Young took inspiration from travels to indigenous communities in the Amazon. She wanted to heal the Earth, in addition to peoples’ bodies.

Now, they were pitching strangers several times each month on an optimistic path to “reverse” climate change.

Perhaps the program will reduce carbon emissions one day.

But so far the organizers have found an eager audience for a simple, age-old salve. Nearly 8 in 10 Americans believe humans are causing global warming, according to a Kaiser Family Foundation and Washington Post survey conducted this summer. More than 75% believe climate change is a major concern or a crisis, the polling says.

For some, human connection and action make the world’s most fearsome monsters feel more manageable.

The public dialogue is shifting, said Heidi Roop, the Strategic Communications Lead with the University of Washington Climate Impacts Group.

“It’s no longer about, ‘Is the climate changing?’ ” Roop said. “People are hungry for the so-what and the what’s next.”

The way Scott Henson sees things now, he’d lived his adult life on a consumerist treadmill and in service to a symbol of economic growth — the almighty gross domestic product (GDP).

“That arrow is what I’ve focused my life on,” he said.

Then, in 2017, he found his teenage daughter crying in the living room, “overwhelmed” and juggling too much in life.

“I created that culture,” he said, describing it as a mentality of consumption.

The moment spurred Henson, a tech executive with stints at Microsoft and Amazon with an “all-in personality,” to transform his family’s lives, starting with his own.

He ran daily, practiced yoga and stopped eating sugar, bread and processed meat. He ditched alcohol. His tall frame slimmed by 100 pounds to a slender 185.

Henson’s reading and podcast-listening interests veered toward minimalism, living without waste and reducing greenhouse gases. He had solar panels installed on his Capitol Hill home’s roof.

Henson began to reinvent his professional life around climate change. He now volunteers with the Carbon Leadership Forum, a University of Washington collaboration focused on reducing carbon in building materials, and is exploring business ventures around carbon reduction.

After an eight-week course with a nonprofit environmental advocacy group called the Pachamama Alliance, Henson met Young and Dawson, who were hoping to bring to Seattle a climate-change curriculum based on the 2017 book “Drawdown,” which bills itself “the most comprehensive plan ever proposed to reverse global warming.”

Young had traveled three times with Pachamama to the Amazon, where she saw that indigenous peoples’ “day-to-day lives depend on care and stewardship of the land.”

Young practices a form of movement therapy called the Feldenkrais Method. Patients come to her when they’re anxious, hurt or desperate and when conventional physical therapies have not worked.

Dawson, a retired engineer, first learned of climate change during a church presentation in the 1980s.

“Everything has gotten worse faster than anyone has predicted,” Dawson said. Conditions scientists once slated for 2050 seemed to be moving ahead in time, she said.

In retirement, Dawson increased her climate advocacy, campaigned for carbon pricing in 2018 and began to volunteer with Earth Ministry, an interfaith group focused on the environment.

Christians must be “stewards” of creation, she said. “We’ve been using up the planet and not looking ahead to what that leaves for future generations.”

At the Wallingford event, the organizers spent 90 minutes walking attendees through some of the 100 Drawdown solutions to climate change, which are ranked by their potential to reduce greenhouse gases and their net cost or savings to the global economy.

Each solution has been vetted and modeled by scientists, researchers and policy wonks with Project Drawdown, a nonprofit research group.

Refrigerant management, developing wind turbines and reducing food waste top Drawdown’s impact list, but other ideas less obviously tied to the environment also are included, such as the education of women and girls.

They played cheery videos envisioning a green future on a projector screen and broke up into small groups to discuss how to plan and implement projects for the 100 solutions.

“How do you figure out where to start?” Dawson asked.

When ‘the smoke hit’

Climate change can summon feelings of powerlessness, fear and anger, according to research cited by the American Psychological Association, in a guide to mental health and climate. Climate worries can cause stress. Some people express guilt over their personal behavior and what it means for future generations. People can be “deeply affected” by loss, feel helplessness and express frustration when they feel unable to make a difference on climate.

Climate worries lurk beneath, only to surface as people reckon with big life changes, said psychologist Daniel Masler, who operates a practice in Woodinville.

“It will come up when people are making plans on where to live, when people are thinking about whether or not to have a child or when couples are trying to get along,” he said.

Masler said clients have brought up climate with more frequency in recent years. He suspects that stems from scientists communicating more assuredly about impacts, increasing media coverage and people seeing for themselves apparent climate-change effects.

“There’s a background anxiety and sadness,” he said.

But most Americans rarely or never discuss climate change with friends or family, according to the Kaiser/Washington Post polling.

More conversation, and venues for it, are needed, Roop said.

For Munin, who attended the fall Drawdown session, climate change had been on her mind for over a decade since scientists on the news forewarned of melting arctic ice, intensifying hurricanes and flooding to come.

Recent summers, choked with wildfire smoke, felt like a rude and personal introduction to Munin, an administrative coordinator in community health.

“Once the smoke hit, it became a foreground concern for me,” Munin said.

The 54-year-old couldn’t stop hearing the late 1960s theme song from “Here Come the Brides” TV show, whose lyrics boasted that “the bluest skies you’ve ever seen are in Seattle.”

Munin lay awake with terror some nights. She wondered if she had done her daughter, now 23, an “injustice by bringing her into the world.” Munin had once dreamed of traipsing the country in a motor home as a retiree. That no longer felt ethical.

Munin had attended several meetings of a climate group focused on activism. But she found Drawdown’s positive message more appealing.

“I know how to make a project plan,” she said. “It fits much better with how I see myself making a contribution.”

For Sifang Chen, a Microsoft nanotechnology researcher who also attended the meetup, thoughts of climate change gave her “existential dread.”

Years ago, Chen began graduate school with plans to eventually use her scientific learning to help space colonization efforts.

As a University of Washington doctoral student, Chen worked with synthetic DNA to create new engineering materials. But during preparations for her doctoral degree, Chen found herself easily distracted.

Climate change was “always in the back of my mind,” Chen said. She’d dream up projects to mitigate it when she ought to have been working on her doctoral defense.

Now at Microsoft, Chen works on technology to aid sustainable growth in cities.

She said Drawdown “gives you all these different areas you can look for a solution. It gives you a sense of optimism and sense you can do something.”

How do you help the climate?

Drawdown, she explained, aims at a sweet spot in between: To affect friends, families, neighborhoods or communities with projects like reducing local food waste or adding solar panels to nearby schools.

The organizers challenged each attendee to return to the meetup this winter after picking one of Drawdown’s 100 climate solutions and dreaming up a community project to help.

Perhaps their efforts will catalyze change. At least, they could provide some relief from worries.

“Some of the ways to confront climate change are actually, also, coincidentally ways to better mental health,” Masler, the psychologist, said. “Coming together and actively confronting a problem and starting to take steps toward controlling something that’s gotten out of control — that’s one of the best ways to relieve stress.”