Climate change will become worse before it gets better.

According to research led by scientists at the University of Washington, eliminating greenhouse gases would stabilize the planet in the long term, but the subsequent loss of aerosols — small particles suspended in the atmosphere — could temporarily trigger alarming temperatures sooner than expected.

Aerosols come from natural sources — volcanic eruptions, for example — but can also be produced through the burning of fossil fuels and wood. They have a cooling effect on our atmosphere thanks to their ability to disperse sunlight and influence cloud formations. 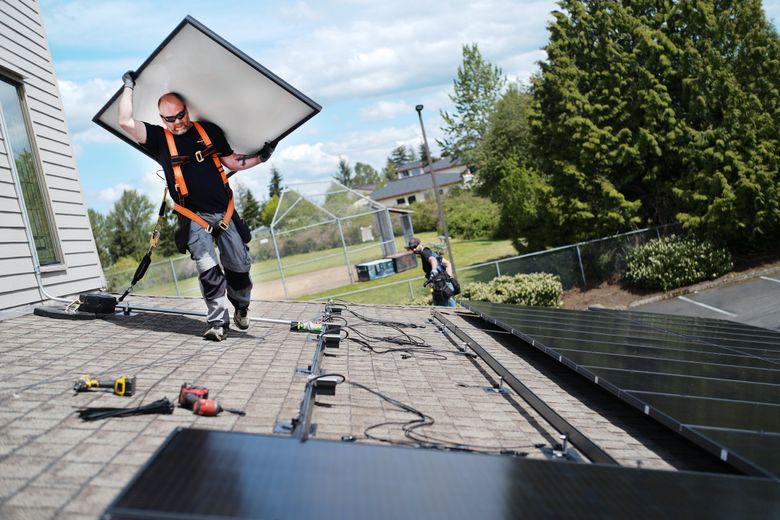 Puget Sound Energy has spent nearly $1M on solar projects in Western WA this year. Here’s what one looks like

The study published Monday says there’s a 42% chance the planet will reach 1.5 degrees Celsius of warming above preindustrial levels within the next decade even if worldwide emissions were eliminated today. If the world stopped emitting in 2029, that probability rises to 66%.

“If we were to reduce our emissions very rapidly, we lose that cooling effect of the aerosols much faster than we would lose the warming effect of CO2,” said Kyle Armour, a co-author of the report and an associate professor of oceanography and atmospheric sciences at the UW. “Because the aerosol pollution is currently masking some global warming that would otherwise occur, what that means it that at any given time, the Earth is committed to more warming than we’ve actually seen.”

The findings strongly suggest fossil fuels need to be phased out sooner than previously understood.

Even if emissions ceased this moment, certain greenhouse gases would last longer — far longer, in some cases — than others. Nitrous oxide and methane have lifespans of about 114 and 12 years, respectively, while carbon dioxide can hang in the atmosphere for 300 to 1,000 years. Aerosols dissipate more quickly.

“If we were to turn off all of our emissions, we would expect that temporary bump up in warming of several tenths of a degree.”

The landmark Paris accord of 2015 called on member nations to limit global warming above preindustrial levels to 2 degrees Celsius — ideally 1.5 degrees — to avoid an irreversible collapse of the planet’s natural systems.

Last year, the planet warmed an average of 1.1 degrees Celsius above preindustrial levels, according to the World Meteorological Organization. This is the hottest Earth has been in over 150 years.

In May, the WMO said there’s a 50% chance the planet’s average temperatures will temporarily reach 1.5 degrees above preindustrial levels in at least one of the next five years.

The National Ocean and Atmospheric Administration announced last week that an observatory in Hawaii measured unprecedented carbon dioxide levels in the atmosphere in May. Researchers there recorded CO2 levels at 421 parts per million last month, an increase from last year even as the planet continues to surpass levels not seen in more than 4 million years.

“The science is irrefutable: humans are altering our climate in ways that our economy and our infrastructure must adapt to,” NOAA Administrator Rick Spinrad said in a statement. “We can see the impacts of climate change around us every day.”

Still, though the prospect of temporarily exceeding 1.5 degrees of warming is quickly approaching the realm of inevitability, scientists say long-term temperature increases are still avoidable.

Many of the planet’s natural systems are sensitive to abrupt changes in temperature. These include sea ice, hurricanes, rainfall and flooding as well as terrestrial and marine heatwaves, to name a few, all of which will likely be exacerbated significantly by a 1.5 degree increase in global temperatures, even if it’s temporary.

If greenhouse gas emissions are largely eliminated over the next three decades — as is called for by the Paris accord — that peak will remain temporary and temperatures could fall below current levels.

“Within several decades, you would expect those temperatures to come back down again, even below the present-day temperature if we shut off our emissions today,” Armour said. “This provides further evidence that, not only do we need to get to net zero emissions, we might have to do it a bit more quickly than advertised.”