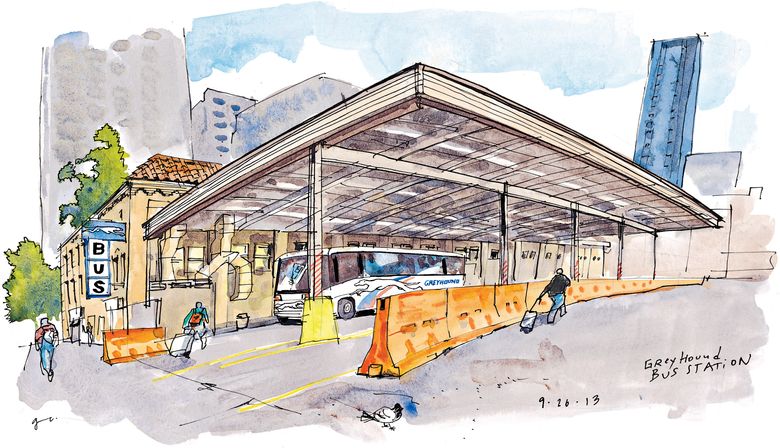 The days of the downtown Greyhound Bus Terminal are numbered. The entire city block where one of Seattle’s oldest transportation hubs has stood since 1927 is slated for redevelopment next year. Will we miss it?

The significance of the building may be lost at first sight. The majority of the original brick work was covered with beige ceramic tiles in the 1960s. (What were they thinking?) Mismatched additions like a roof overhang covering the passenger-loading area also mask the integrity of the station.

But consider the history. Decades before buses and light rail shared the downtown bus tunnel, streetcars and buses ran alongside the same wall where I recently sketched passengers boarding the 2:10 p.m. Greyhound to Vancouver, B.C.; part of the rails can still be seen through the pavement.

The Central Stage Terminal, as it was called then, was the southern base of the Seattle-Everett Interurban rail line and home to a number of coach companies that later displaced the streetcars and preceded Greyhound. Call it the first hybrid bus-rail station in the city.

While Greyhound plans to build a new terminal near the Stadium light-rail station early next year, the redevelopment of this site into a massive hotel/residential complex will erase an important part of Seattle’s transportation past. The city didn’t deem the terminal worthy of landmark status, so don’t expect the bulldozers to leave any part of it standing.

The waiting room inside the terminal was abuzz with activity on a recent weekday. Mary Patton had traveled here from Sequim on the Dungeness Line shuttle bus. She said she was a Seattle Times subscriber, so I didn’t have to do much explaining about my work. I hurried to make this sketch before she boarded the 1:10 p.m. bus to Portland, where she was planning to attend a wedding.
—ooo—

Gary Saben, who’s worked for Greyhound for 39 years, stopped to peek at my sketch of the building, and I came by to draw him when his bus was ready to leave. He said he’s looking forward to the new terminal in Sodo. “Change is always good.”
—ooo—

When I asked station manager Joseph Hapac what was special about the terminal, he knew exactly where to take me. We walked outside towards Ninth Avenue and he pointed to the rails still visible on the pavement. Then he pointed up to the part of the building where you can still see the original brickwork, right above the roof overhang.
—ooo—

Your community. What draws you in? Send me your suggestions of interesting places and people to sketch via e-mail, Facebook or Twitter.