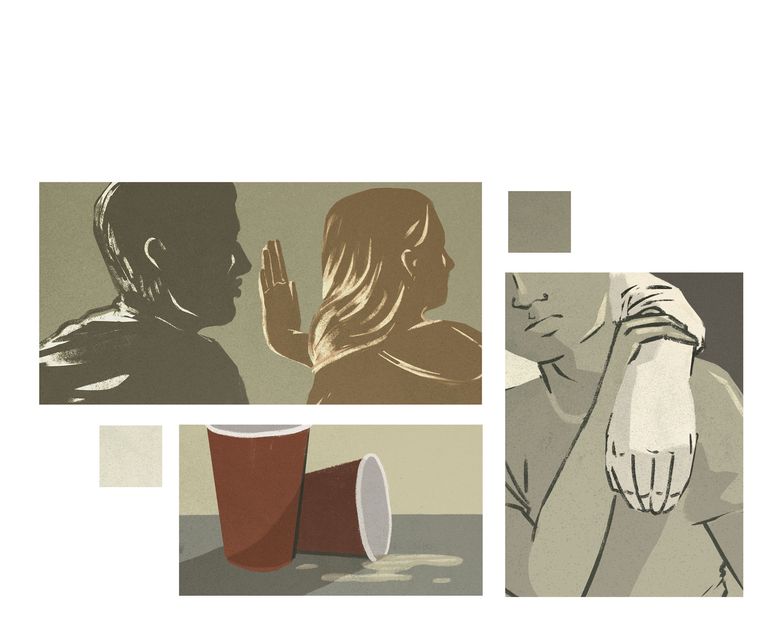 The Seattle Times asked readers how and when they learned about consent, and what they remember from that time. Their responses shed light on a topic under increasing scrutiny with the #MeToo movement and the large number of high-profile men accused of sexual misconduct.

Janet Blanquies, 65, wishes her mother — or maybe a teacher — had told her she had a right to say no if she didn’t want to have sex.

Instead, when her mother sat then-10-year-old Blanquies down with her 12-year-old sister to talk about sex, she only explained what it meant to be a virgin. She didn’t mention anything about consent. And the subject was never discussed at school.

“I had to learn the hard way, by trial and error,” wrote Blanquies, one of 250 people who responded when The Seattle Times asked readers when and how they learned about consent, what they remember from learning the concept, and how they define consent now.

Together, the 250 responses include many painful stories about experiences where consent was lacking — and some joyful ones when it was clearly understood. They shed light on a topic that’s under increasing scrutiny with the #MeToo movement that has swept the nation and the large number of high-profile men accused of sexual misconduct.

“It took decades of subjecting myself to numerous terrible and frightening experiences to finally figure out that I had the power to say ‘no’ and to call people on their bad behavior,” said Blanquies, who lives in Anacortes.

Blanquies was one of many who agreed that addressing consent early may prevent sexual assault in the future. That’s also the view of many Seattle-area educators, who are starting to talk more about consent in sex-education lessons in high school, and even with younger students.

But discussing consent in a school setting is relatively new. The responses from readers echoed this: Only about 15 percent of the 250 said they learned about consent in school, and 40 percent said they didn’t learn about it until they were adults. A handful, including Blanquies, said they were never explicitly taught about the concept at all.

Blanquies made sure her own children, now 40 and 42, knew they could say “no” if they didn’t want to do something. She treated consent like a fundamental skill, as important as learning how to read or get dressed.

“We have two words,” she wrote in explaining how she defines consent. “One is ‘yes’ and one is ‘no.’ Everybody knows exactly what they mean. It’s that simple.”

It often got to the point where I felt like sex was the only choice.”

In all, those who responded to The Times’ request ranged from high-school freshmen to longtime retirees, and included people of all genders and sexual orientations. Some agreed that their names, ages and jobs could be published; others requested anonymity.

And while most agreed they would have benefited by learning — and talking — about consent much earlier in their lives, several also said they are re-examining past experiences, wondering if they were violated or violated someone else without knowing it.

“I wish I’d learned about consent sooner … because in retrospect too many of my sexual experiences were coerced,” said a 25-year-old woman. “It often got to a point where I felt like sex was the only choice.”

Listen | Reporter Paige Cornwell on what readers said about consent »

“I remember realizing that there was a lot of gray area and instantly wondering if I had ever violated someone’s consent while also realizing how I had had my own consent violated many times,” said a biologist who learned about consent as an adult, from a friend.

Washington law says consent means that actual words or conduct are given to indicate agreement. But if the people who responded to The Times are any indication, there’s no universal definition.

“Consent is not simply the absence of ‘no.’ Consent also can only involve fully aware adults,” said Sara Cone, a photographer.

Donny Schell, who works in public relations, said consent means “not taking advantage of someone or putting them in an uncomfortable position. Also, stopping if they say so or seem hesitant. Try to ensure everyone is happy and comfortable.”

But not all 250 respondents agreed with that premise. A mother of teenage boys said when she was dating, she found it unromantic if a man asked if he could kiss her. She added that she’s worried about how her sons will navigate romantic relationships when they go to college.

The #MeToo movement has sparked a national conversation about sexual harassment and assault. From actors in Hollywood to security guards at the Seattle Public Library, more people are coming forward with painful and intimate stories of abuse, casting new light on behavior that for too long has been dealt with in whispers, secret settlements or not at all. So where do we go from here? The Seattle Times' occasional series explores that and other questions as we move forward in this changed landscape.

Read more from the series »

“I think it’s unlikely and a false expectation to think that a couple would verbally ask/answer about every physical interaction,” she wrote.

A large number of people said they were taught women shouldn’t “want” sex and that it was a woman’s responsibility to prevent being assaulted — by not drinking too much, or by carrying whistles and staying in groups.

A first-grade teacher said she long felt she was to blame for being sexually assaulted multiple times when she was in college.

“In high school, my peers and I believed that having sex determined our worth and that if we wanted to be liked we needed to accept the fact that being ‘used’ is just part of being a woman,” she wrote. “In college, all the education focused on how women should take steps to prevent an assault … reaffirming my belief that it is the woman’s fault, that it is MY fault.”

Decades ago, a 70-year-old man wrote, he thought it was up to men to figure out if they had consent.

“Women never wanted to be thought of as ‘loose,’ so if women were receptive, they usually wanted to be persuaded, and it was always left up to the poor chump to figure out if he had consent,” he wrote. “ ‘I really shouldn’t,’ or ‘you really shouldn’t,’ was usually recognized as a green light. ‘Don’t,’ ‘stop,’ or ‘I can’t’ was a red light. Any physical resistance meant it was time to stop.”

Health teachers and sexual-assault prevention advocates say conversations about consent should start in elementary school, or even sooner, with topics like whether it’s OK to hug someone, and the difference between wanted and unwanted touching.

In college, all the education focused on how women should take steps to prevent an assault ... reaffirming my belief that it is the woman’s fault, that it is MY fault.” “Thankfully, I was a curious kid and had unsupervised access to a computer, and while teaching myself about sex I would come across articles or discussions about consent,” said a 25-year-old who was home-schooled and said she never had a conversation about sex with a parent. “As someone who was sexually assaulted at a very young age, I wish I had known about the tenets of consent sooner so that maybe I had more agency about my body even as a young child.”

When you find people who think it’s amazing you want what they want, everything has more energy and charge.”

A man who works in education technology said he’s learned more about consent after his divorce, as he pursues new relationships.

“I think the most important thing to me is how enjoyable consent is,” he said. “When you find people who think it’s amazing you want what they want, everything has more energy and charge.”

Public schools in King County use the FLASH (Family Life and Sexual Health) program to teach students about sex, puberty and — increasingly — consent. The curriculum, which is considered a national model, includes lessons on gender stereotypes and how to say and acknowledge the word “no.”

The readers who shared their experiences and thoughts about consent with The Times overwhelmingly said they agree that the concept should be taught in classrooms. And they have talked, or plan to talk, to their children about it, too.

“I ask my kids’ permission before touching them and insist that they do the same for each other and for me,” said Dani Karmil, 34. “I let them see me stand up for their rights to decline physical contact. They are reprimanded or disciplined if they don’t respect someone’s ‘no.’”

One student, whose school used the FLASH curriculum, said the easiest way to fix the problem of sexual misconduct is to be clear and direct with young people about how consent works.

“In order to have a healthy conversation about consent, everyone needs to be able to face and respect each other,” Stella Sisson said. “No matter what.”

“I feel certain that the numbers on sexual assault and rape, as large as they are, are just scratching the surface. It’s built into our culture to ignore people’s personal agency, especially when it comes to sexuality and personal touch,” she wrote.

“The only way to combat that is through education.”