An 8-month-long and contentious bidding war over the school bus contract at Seattle Public Schools may end in a tie.

On Wednesday, the Seattle School Board will vote on a three-year, $42 million measure that would split transportation services between the district’s current carrier, First Student, and its first competitor for the contract in many years — a California-based company named Zum that provides bus service in districts like San Francisco and Oakland.

Plot twists came at every juncture in the unusually long bidding process, likely the district’s most scrutinized yet given the turbulence of school bus service in recent years — turbulence caused by extreme driver turnover and recruiting challenges. District officials posted a request for bids in October, took it down in February, reposted in March and then indicated they would hand the entire contract to First Student at the end of April. Zum protested the outcome, arguing the district made an error in evaluating the companies’ costs.

Now, the district is recommending an arrangement where both are on call for service but won’t be entitled to a minimum number of routes.

“This recommendation is the conclusion of a long review process that carefully considered each proposal,” said Bev Redmond, a district spokesperson. 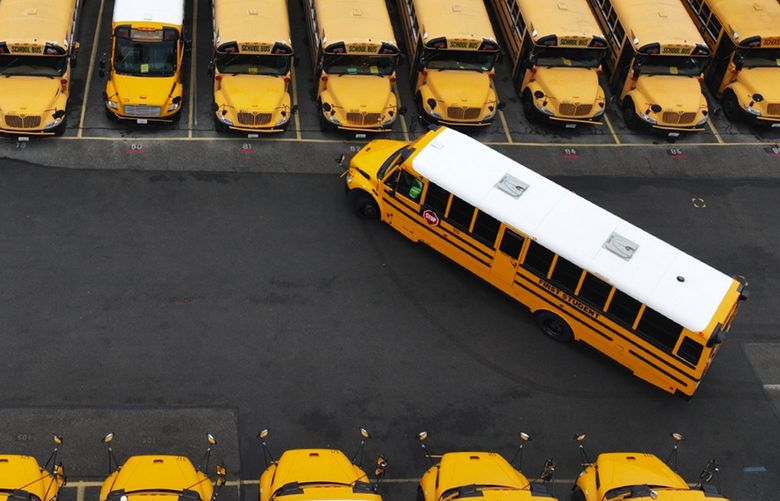 The flexibility of having two contractors would allow one to provide service if the other falls through, district officials said.

“I think that ultimately competition will be good for the district, and for us to determine who will be the best provider,” said Brandon Hersey, the Seattle School Board president.

As the district mulled over the bids, First Student admitted to hundreds of yearslong safety violations found by state investigators in its charter bus division. Charter service doesn’t include daily transportation, but in Seattle, the same drivers are used for both charter and daily school transportation. Zum took out large advertisements in The Seattle Times to garner public support, and billed itself as the stable, worker-friendly alternative, touting a bus-tracking app for families and the promise of an electric fleet. Parents protested against the district’s consideration of First Student for its unreliable and sometimes unsafe service in light of staffing challenges.

Mary Ellen Russell, a parent and chair of the city’s School Traffic Safety Committee, said splitting the arrangement would be better than handing the entire thing to First Student, but she remains against the district’s decision to continue relying on the company.

“They were dead set on First Student, and nobody could ever say why,” Russell said of the bidding process. “They did everything with the goal of it seeming like it was too late for Zum to take the bid.”

Russell wrote an Op-Ed in the spring calling for the district to drop First Student, describing accounts she collected from parents about bus crashes, inappropriate behavior from bus drivers and students being dropped off at the wrong stop.

“The question I would ask any of the School Board members is: knowing that the First Student has put SPS kids in danger, repeatedly … how can you vote to approve any amount of contract for the First Student?” she said last week.

Hersey said parents have “the absolute right to be concerned.”

“The safety violations that have come to light have been nothing short of egregious, and as a board director, it is my utmost priority that they get to school to be safe and on time,” he said. “We have required both providers to submit safety plans, and we as leaders will not tolerate any type of behavior that has put our children at risk, and address them very clearly in these contracts. There will be zero tolerance.”

A First Student representative said the company wouldn’t comment on the contract until it is approved. Zum’s founder and CEO Ritu Narayan, who said she started the company because she was frustrated with transportation at her kids’ Bay Area schools, said the company has already found a lot to park buses in the Rainier Beach area and is securing access to a fleet of vehicles.

Among them: a lawsuit against the company alleging that workers in San Francisco weren’t paid for activities they were expected to perform before the start of their shifts, and that the company kept video cameras running in buses even while drivers were on break, potentially recording their private conversations and movements. Narayan said Zum has denied all the claims.

The San Francisco Unified School District, the company’s biggest client, has also recovered damages from Zum for performance issues. Narayan said these damages, totaling more than $100,000, were incurred in a transition period — Zum had just taken over transportation services from First Student.

It’s unclear yet how exactly the district will divide the routes. Neither contractor could say.

But, at the end of the presentation shown to the School Board about the proposed arrangement, district officials provided one clear detail, a yearly trend which parents have now come to expect: “It is still anticipated that the district will not be able to serve all routes at the start of the school year.”