The city of Bellevue has filed a lawsuit against a couple whose home was pushed off its foundation during a landslide in the city’s Somerset neighborhood last month, calling for the house to be declared a public nuisance and demolished.

The suit, filed in King County Superior Court, also seeks a temporary restraining order and injunctions to prohibit the homeowners, John and Barbara Surdi, from “perpetuating the public nuisance” and interfering with demolition of the house.

In a statement, Bellevue spokesperson Brad Harwood said a request last week by city officials to demolish the house had been denied by the owners and their lawyer.

“The city doesn’t take this legal action lightly, and we realize the Surdi family is dealing with a terrible situation,” Harwood said. “They have decades of memories and personal belongings invested in the property … Unfortunately, the area is dangerous and we need to move more quickly.”

David Bricklin, an attorney who is representing the homeowners, said the Surdi family does not oppose the demolition, but wants an opportunity to sort through the rubble and recover belongings. On Tuesday, he said the city has tentatively agreed and demolition could start as early as Wednesday or Thursday.

“I think we’re going to get this worked out, but we’re not quite there yet,” Bricklin said.

The three-level home at the end of a cul-de-sac in the 5000 block of 139th Place Southeast was pushed off its foundation on Jan. 17, forcing the evacuation of about 40 people from several other homes.

In the slide, the Surdis lost John’s home-based business, two work trucks, three collector cars, Barbara’s car and their home of about 20 years, where they raised four children, John said in an interview soon after the landslide.

“It’s all gone. Everything, just washed down in the mud, completely smooshed,” he said in the interview. “Surreal is my word of the day. Just traumatizing, and I keep wanting to wake up from this nightmare and fix it.” 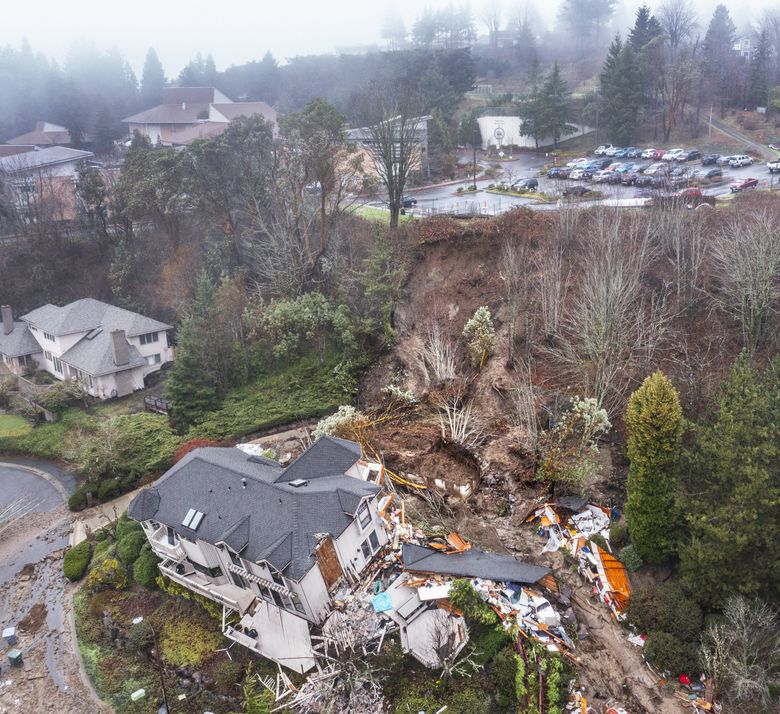 Since the slide, five other homes have remained marked with red tags, prohibiting anyone from entering, according to the lawsuit. A sixth residential property has a yellow tag, allowing partial and restricted use.

A structural report completed on Jan. 27 by a private engineering firm contracted by the city of Bellevue, recommended the home be demolished “as soon as possible.”

The report said the home was pushed off its foundation and is currently unstable and leaning downhill, presenting a “safety hazard for people as well as the nearby street and structures.” While the concrete foundation may be evaluated later, no portions of the wood-framed home appear salvageable, the report said.

The report also warned the home could further break apart if there was a period of heavy rains, windstorms or an earthquake.

According to Bricklin, the city of Bellevue initially said while they were willing to coordinate the demolition, they were not willing to give the Surdi family a chance to go through the debris before taking the wreckage to a landfill.

Harwood said he was unable to confirm Tuesday whether a demolition would occur this week, or provide details of discussions between the city and the homeowners’ attorney.

“We have been throughout this process in close contact with the Surdis and allowing them access to the property has always been part of that conversation,” he said.

John Surdi said Tuesday he is hoping to recover photographs, computer hard drives and tools from his carpet-cleaning business.

The question of what caused the landslide — an act of nature or a broken water main — will likely take months to investigate, according to Harwood.

Bricklin and Surdi, however, say they believe the city is responsible.

“It’s not my pipe that broke,” Surdi said.

Bricklin said he is hoping a topographical survey of the hillside can be completed before demolition occurs. His investigation will look at the condition of the existing and broken pipe, yet to be found, ground conditions and soil and water analysis.