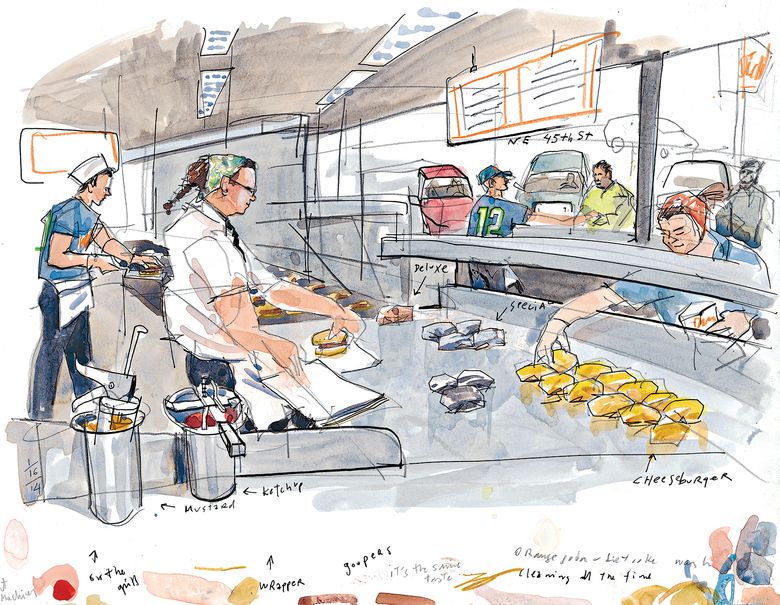 The highlight of my first visit to a Dick’s Drive-In five years ago was meeting restaurant founder, Dick Spady, who is now 90. The low point was realizing that Dick’s burgers don’t come with my favorite ingredient: A slice of tomato.

Dick’s no-tomato policy doesn’t have much to do with tomatoes per se. Adding any extra ingredients would be a huge change, marketing director Jasmine Donovan told me recently as I drew Dick’s crew members in action at the restaurant’s original location in Seattle’s Wallingford neighborhood.

She didn’t entirely rule out the possibility, but since there’s only been one menu change in the history of Dick’s — when orange soda was dropped to make way for Diet Coke — I’m not going to get my hopes up.

Tuesday marks the 60th anniversary of the beloved Seattle eatery. If you are a newbie like I was five years ago, save yourself the effort of trying to customize your order. Instead, you can enjoy getting two cheeseburgers for the price of one that day. A party at the Queen Anne location and 10-cent Cokes all day are planned at all stores on Friday.

Dick’s “crew member” Tarik Faouzi is one of the fastest employees at scooping ice cream into milkshake cups. He can empty a 3-gallon can in less than five minutes.