With clocks turned back an hour on Sunday morning, experts on winter depression say the loss of daylight — just as coronavirus infections start to spike again and election tension comes to a head — could make this an unusually difficult stretch.

Taken together, it almost feels like a last straw. Where we once could see a silver lining in an extra hour of sleep, it’s now hard not to see the end of daylight saving time as the onset of an interminable slog.

That’s especially true for those of us near 47 degrees latitude, where we’ll wake in darkness and not see the sun set after 5 p.m. for three months.

“Our bodies are naturally programmed to sleep soon after the sun sets and to wake soon after the sun rises,” said Dr. David Avery, a Seattle psychiatrist. “… Like many other mammals, humans are susceptible to the biological changes that occur when the photoperiod becomes short.”

Avery said some of his patients who had been doing well before the pandemic found their sleep had become disorganized, with either excessive sleep or insomnia.

“They had lower energy, lower motivation and more depression even in the spring and summer,” he said, noting those symptoms are usually present with winter depression.

As the coronavirus and winter weather compel us indoors, this lethargic “hibernation response” could get more intense.

The single most important thing you can do to stave it off?

And move your computer near a window, said Avery, who is also a professor emeritus at the University of Washington School of Medicine, studying light therapy and circadian rhythms in people with winter depression.

“Even a cloudy day is about 10 times brighter than being inside and not near a window,” he said.

He advises people to set up their computers so they can see light from the window above or on either side of the screen, and to try a dawn simulator — a lamp that emits gradually increasing day-like light — as morning light has the most benefits, he said.

On the flip side, limit your exposure to evening light, especially blue light emitted by screens, two to three hours before bed, Avery recommends.

Seattle-based psychologist Wally Wilkins urges people who might be feeling helpless or hopeless to be as thoughtful and deliberate as possible in their actions and responses.

Mental health issues worldwide are being affected by so many huge and important things over which one person has no control: the pandemic, the economy, unemployment, social unrest, climate change, political divisions and, yes, the hours of light in a day.

But people can control with whom they interact and how, and the amount and type of social media and other internet content they consume, he says.

Set a timer if you need help setting limits on screen time, Wilkins advises, and be thoughtful and deliberate about what you watch on TV or browse on the internet. That means avoiding “doomscrolling” — the masochistic exercise of sinking into emotional quicksand as you endlessly consume gloomy information and angry social-media posts — which can lead to catastrophizing, panic, sleeplessness and worry, Wilkins said. 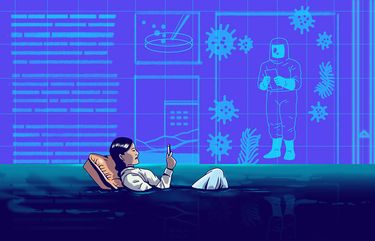 You’re doomscrolling again. Here’s how to snap out of it.

Even before 2020 made the trudge into a dark winter bleaker, a movement was afoot to “ditch the switch” — that is, to do away with the clock change altogether. It has been building support across the United States, from Washington to Florida and along the West Coast.

Washington state legislators passed a bill last year to keep the state permanently on Pacific daylight time (the time we keep in the summer). But Congress would have to approve such a change, and during a pandemic and economic catastrophe, daylight saving time wasn’t a priority. Fair enough.

Rep. Marcus Riccelli, who was among the bill’s sponsors in Olympia, said perhaps this year’s “fall back” could give the effort a new swell of momentum.

British Columbia, Canada, has said it would adopt permanent daylight saving time if the rest of the West Coast did.

But time has run out to make that happen this year. So, be sure to set your clocks back an hour on Sunday morning, and try to spend the extra hour sleeping, meditating, exercising, enjoying the mostly sunny weather — whatever would bring you joy. Just don’t spend it doomscrolling.

Information from The New York Times is included in this report.

1. Be thoughtful and deliberate about what you watch on TV, social media and the news.
2. Avoid doomscrolling.
3. Set a timer if you need help setting limits on screen time.
4. Notice your body sensations, and when you begin to feel stress, stop.
5. Don’t complain, and avoid people who do complain.
6. Do yoga.
7. Meditate.
8. Practice treating your thoughts like passing clouds.
9. Create a vision board of what you want in your future.
10. Post positive affirmations where you can see them, even if that seems cheesy.
11. Talk to yourself as if you were talking about a person you love.
12. Learn to listen to your inner mentor, not your inner critic.
13. Tell yourself, about the rain and darkness: “This is temporary.”
14. Try to get your normal number of hours of sleep each day. Avoid sleeping too little or too much.
15. Try to keep the light-dark cycle and the sleep-wake cycle regular. Go to sleep at about the same time. Wake up at about the same time.
16. Increase your exposure to daytime light. Go outside. If you’re inside, be near a window. Try using a dawn simulator in the mornings.
17. Decrease evening light exposure two to three hours before you want to go to sleep. In the late evening, glasses that block blue light, or blue-blocking apps like f.lux or Night Shift for computers and phones, may be helpful.