Seattle-based American Seafoods will forgo additional COVID-19 screening of the Ocean Rover factory trawler, a move that has some crew worried and wanting more assurances the disease has not found its way onto the Alaska-bound vessel.

American Seafoods has been buffeted in the past two weeks by test results from crews of three other vessels  unloading frozen fish in Bellingham. Testing positive: 94 crew on the American Dynasty, four on the American Triumph and 21 on the Northern Jaeger, findings that rattled the North Pacific seafood industry, which is struggling to keep the virus off boats and shore-based plants as the busy summer harvest season approaches.

This week, American Seafoods announced it would boost efforts to keep the new coronavirus off its factory trawlers, switching from preboarding testing coupled with quarantines of at least five days to longer two-week quarantines.

The crew of the Ocean Rover, which this week finished off a spring season fishing for Pacific whiting off the Northwest coast, underwent the same shorter quarantine period that failed to keep the virus off the three other vessels. Some crew and families of crew reached out to The Seattle Times to express their dismay at the company’s decision to not make a June port stop in Bellingham for screening. They note that many of the crew on the other vessels that tested positive had no symptoms, and wonder whether some of their crew might also unknowingly be carrying the virus.

“We were supposed to get tested. We have our rights. I demand to get tested,” said a crewman, who spoke on the condition of anonymity, citing concerns about possible retaliation from his employer. 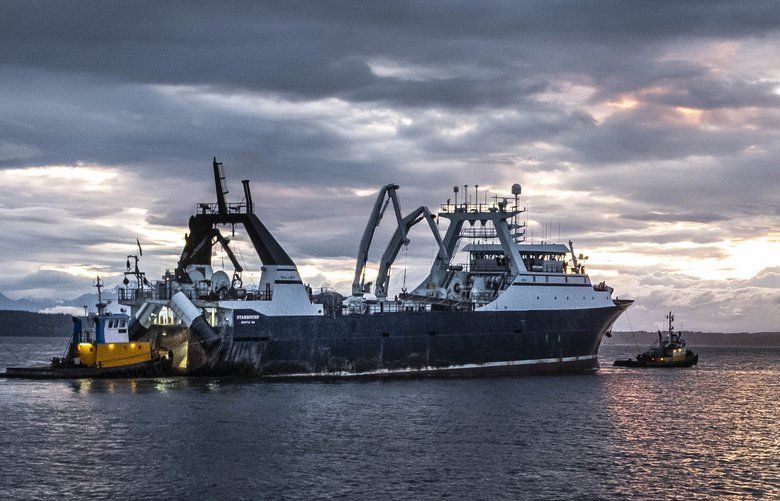 American Seafoods issued a statement Thursday, saying the Ocean Rover has been at sea for a month, and there is no information about any COVID-related illness on board. The vessel is expected to arrive Sunday at the Dutch Harbor port at Unalaska, Alaska, and will fish for pollock.

“The vessel and its crew are in full compliance with Alaska’s COVID-19 related requirements for fishing vessels,” the statement said.

American Seafoods said no decision has been made about whether a fifth vessel that fished off Washington will head straight to Alaska.

Erin Reinders, city manager of Unalaska, said the situation is being monitored but it appears American Seafoods is meeting Alaska’s requirements for fishing vessels, given the long period that the Ocean Rover crew spent isolated at sea.

American Seafoods factory trawlers typically unload the frozen whiting products at Bellingham Cold Storage, which on June 1, in consultation with the Whatcom County Department of Health, the Coast Guard and other agencies, developed COVID-19 requirements that must be met for ships wanting to dock and use the facility.

Those requirements include a report on the current health of the crew that must be reviewed by county health officials, according to Doug Thomas, president of Bellingham Cold Storage.