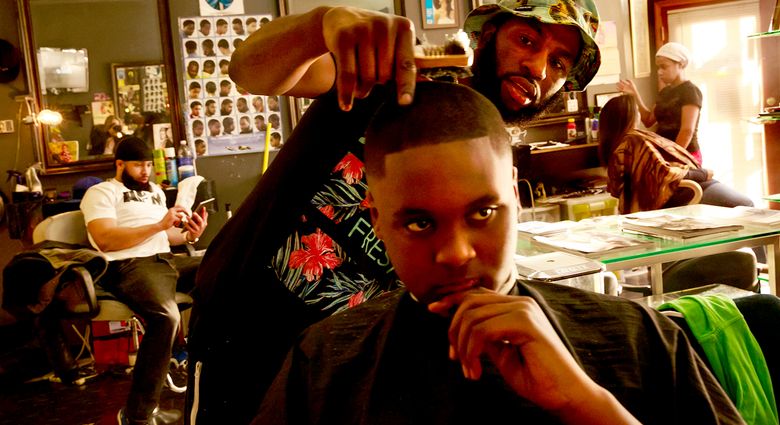 Spac3man cuts the hair of Pharell Gayle, 13, at Frank’s Barber Shop at 23rd Avenue and South Jackson Street, Seattle. Owner Frank Taylor started this shop, his second, in January, anticipating the purchase of the shopping complex where his first shop was located. (Erika Schultz/The Seattle Times)

The vibrant Central District was more than 70 percent black in the 1960s and early ’70s. Today, African Americans represent less than a fifth of the neighborhood’s population as the city’s tech boom raises the cost of living.

Conversations at Frank’s Barber Shop at 23rd and Jackson in Seattle’s Central District skip around like sidewalk double-Dutch jump-rope competitions, and anyone who enters has two choices — jump in and speak up or fall back and just watch.

One recent morning, barber and hip-hop artist Spac3man, pronounced “Spaceman,” time-travels to his childhood and brings the whole room along with him.

Today, Seattle’s historic Black neighborhood is increasingly a thing of the past — the culture it fostered confined more and more to nostalgic conversations and to venues such as the Langston Hughes Performing Arts Institute and the Northwest African American Museum.

The district is only 20 percent Black, down from more than 70 percent in the 1960s when housing discrimination elsewhere in town forced most Black people to live in the CD.

The once-small white population, by contrast, has ballooned to around 60 percent.

Much of the change has been attributed to a recent wave of gentrification. Indeed, the city’s tech boom has raised the cost of living, pushing higher-income earners into lower-income neighborhoods.

A sense of loss in the CD

But the causes and red flags go back decades.

Phyllis Beaumonte, associate pastor at Mount Zion Baptist Church, one of the oldest and largest Black congregations in the city, says that as far back as the early 1980s Black ministers in the CD stood at their pulpits and cautioned their congregations that gentrification was coming and that property values were going to skyrocket.

Many Black homeowners jumped at the opportunity and sold, then relocated farther south, where suitable new housing was more affordable.

Then in the 1980s and early ’90s, the crack epidemic hit urban, Black communities from coast to coast, Seattle included. African-American families found themselves struggling with chemical dependency and the drug-related arrests of loved ones. As the arrival of white homebuyers threatened the district from the outside, the crisis ate away at the neighborhood from the inside.

Next came the housing bubble of the mid-2000s, when predatory lenders disproportionately targeted Black and Latino homebuyers with unsustainable mortgages. The home-ownership rate among Black people in the city dropped by half between 2000 and 2013, with just one in five Black households owning its home.

Meanwhile, recent studies of homelessness by King County researchers found that about 60 percent of families in shelters and up to 40 percent of individuals living on the streets on any given night are Black.

The nagging gap in achievement between Black and white students in Seattle further threatens the economic outlook of the local Black population.

Spac3man, 29, says he’s the primary breadwinner in a house at Yesler Way and 28th Avenue built by his great-grandfather, where various struggling family members have lived over the years.

He talks about an economic “disconnect” between his generation and his parents’.

Spac3man says that while he was growing up off and on in the CD, friends were pretty much on their own at home because many of their elders were dealing with addiction, incarceration, unemployment and other problems.

A life of struggle and stifled potential was all many in his age group knew.

The question is whether it’s too late to pick up where that chapter in the community’s history left off.

“It’s our turn to be the dads and grandparents in the neighborhood, but we don’t have the opportunity,” Spac3man says. “Our generation is working from scratch. It just sucks to see people not be able to transition into their parents’ homes.

“I feel I’m at a crossroads where I want to move out of the CD. But I want my son to grow up in a place that has a rich culture … It’s a little bit of a tug of war.”

Vivian Phillips, the African-American director of marketing and communications for Seattle Theatre Group, recalls attending a recent jazz event along Jackson Street in the CD, where she lives, and seeing mainly white faces in the bands and crowd — a striking sight on a street that once boasted dozens of Black jazz venues.

As chair of the Seattle Arts Commission, she successfully led a campaign to designate the CD as a historic arts and cultural zone last year. Recently, however, she saw that a Facebook friend was suggesting that Kent, where many Black Seattle households have resettled in recent decades, had become the “new” CD.

“There seems to be this conflict that Black people really do want to live in the Central Area, but don’t find it appealing any longer” or affordable, Phillips said by email.

Jessica O’Brien, a successful African-American hairstylist, made a conscious choice to live with her husband in a CD town-house complex in which they are the only Black couple. But O’Brien talks about walking her dogs through the neighborhood and having white neighbors stare, clutch their belongings and even cross the street to avoid her.

The sense of unwelcome is even more galling because she has deep family ties to the neighborhood.

From the CD down through Rainier Valley, the same frustrations reverberate in conversations with African Americans young and old who sense they are being turned into strangers on their own stomping grounds.

“Seattle is losing its Blackness — literally and figuratively,” says Marcus Green, a native of South Seattle who six years ago started an online news outlet, the South Seattle Emerald, to highlight the issues affecting people in some of the city’s most ethnically diverse ZIP codes.

Black churches are also struggling with social and economic pressures, and occasional acts of hostility, as the neighborhood transforms.

When Pastor Lawrence “Ricky” Willis took over at Truevine of Holiness Missionary Baptist Church in 2001, it was located in a building owned by the church at 18th Avenue and East Columbia Street in the CD. But his flock was dangerously small.

“There were six people, and they were all over 60,” he says.

Willis launched an aggressive campaign to grow the congregation and ensure the church’s financial viability.

He visited and mentored young Black prison inmates, offering guidance to enrollees in substance-abuse rehab programs. When they got out of prison and rehab, Willis continued those relationships, helping people reintegrate into society. Many wound up joining his church.

The congregation mushroomed to 125 in three years, and when Truevine needed to expand, it did so in Skyway because land adjacent to the existing church had become too expensive, Willis says.

Skyway, in unincorporated King County just south of Seattle’s city limit, has long been a magnet for low- and moderate-income Black households fleeing the pricier urban center. About a third of the area’s population is Black.

The commercial thoroughfare along Renton Avenue South is lined with strip-mall churches, many of which moved there to be closer to worshippers who’ve scattered from the urban core.

Willis says a number of these churches, including Truevine, are also splitting costs and sharing sanctuary spaces to ease the strain on their operating budgets.

Church happens in shifts at Truevine’s sanctuary. Willis’ service starts just before 10 a.m., and by noon, the predominantly Black congregation that owns the building and leases to Truevine starts its own service. A third congregation holds services on Saturdays.

Willis has high hopes that Skyway will develop into an economic and cultural hub for African Americans, with Black churches showing how to pool resources and build connections with a community that has shifted southward, away from the CD.

“This is almost starting a new history,” he says.

She says that even though her city has attracted many Black people in search of affordable property, African Americans, who make up about 13 percent of the population, still lack adequate political and economic influence with the city’s “old white guard.”

“Some people who’ve been gentrified out of Seattle feel like immigrants coming to Kent,” says Allen-Carston, who owns C & G Hair and Beauty Supply in the city’s East Hill neighborhood. “They’re basically just coming into the wilderness trying to figure everything out.”

“If we don’t take care of us, nobody is,” says Allen-Carston, who sits on a number of civic boards. “The way to do that is to be at these tables” where decisions get made.

Wyking Garrett, one of the founders of the cultural and economic-development group Africatown, is taking a similar approach back in Seattle.

Africatown and other neighborhood groups act as bridges between developers, the city and the African-American and African immigrant communities. Recently, they’ve worked with the city and the nonprofit Capitol Hill Housing on the development of affordable housing and possible arts space at the location of the former, Black-owned Liberty Bank at 24th Avenue and East Union Street.

“This place is fertile ground for people of the African diaspora to realize their full potential and show Black lives matter in an economic way,” an optimistic Garrett says.

In addition to the 24th and Union project, he points to the MidTown Center property up for sale at 23rd and Union as a chance to do “equitable development” that doesn’t displace existing residents and merchants.

Meanwhile, the owners of two of the CD’s threatened Black barbershops, Frank’s and Earl’s at MidTown Center, plan to relocate within the CD as development reshapes their respective intersections.

One spring day as Erika White gets ready for the lunch rush at Fat’s Chicken and Waffles, the restaurant she manages at Martin Luther King Jr. Way and East Cherry Street, she expresses both regret and cautious optimism about the CD’s evolution.

An African American who grew up in Madison Valley and the CD in the 1980s, she understands the sense of upheaval and loss.

White, 46, says that as a kid she noticed a trickle of whites moving into the area. But clearly, something was taking shape.

“This was a 20-year process,” White says. “It takes a whole community but at some point, we dropped the ball.”

White shares the attitude of many African Americans pondering what’s next for the neighborhood: Be a part of the change.

Last year, when her good friend, restaurateur Marcus Lalario, needed someone to run his new Central District eatery at the former Catfish Corner location in the CD, it made sense to pick White, a successful restaurant manager, local hip-hop figure and native daughter from the neighborhood.

White tries to make Fat’s feel like a favorite auntie’s house. She knows a lot of the regulars by name. She grew up around some of them.

The scene is like a portal to the past, with plants in hanging macramé baskets, R&B and hip-hop classics blasting from the speakers, and a relaxed, racially mixed customer base.

Lalario and White are aware that some in the neighborhood take issue with Fat’s being owned by a white guy.

That goes with the territory for a business that has a mural of King gazing from an exterior wall toward a street bearing his name.

White says that if things go well, who knows, maybe she’ll be in a position to take over the restaurant someday and create a whole new legacy — one she can pass on to her son.

Spac3man is taking the CD’s troubles as a lesson learned, too.

“I have a lot of Black men who I talk to who are parenting — a lot of cats haven’t given up,” he says. “With our generation, and with our kids, it’s going to be completely different.”

Correction: Information in this article, originally published May 28, 2016 was corrected  May 30, 2016. A previous version of the story gave an incorrect address for Frank’s Barber Shop. The shop is at 23rd Avenue and South Jackson Street.