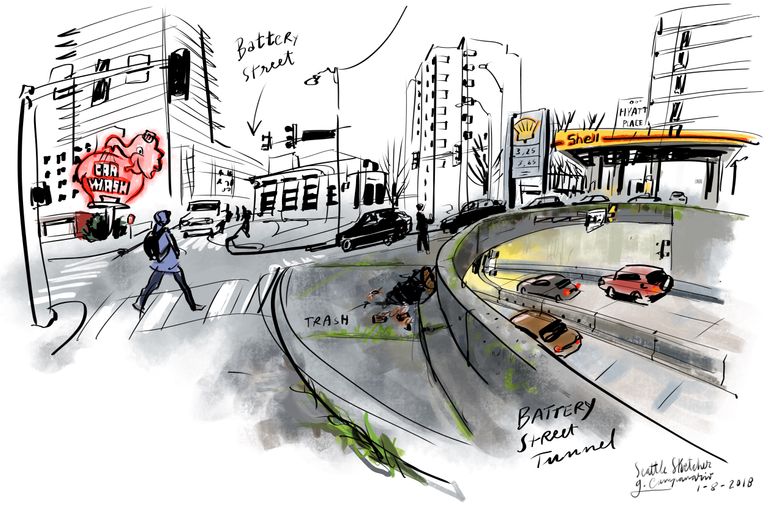 Some of the more inspired responses included building a giant swimming pool and water park, a big bocce court, a skateboard park, a marijuana pea patch or a night club.

My recent post about the future of the Battery Street Tunnel generated a lot of interesting ideas from readers.

Some of the most far-fetched responses they sent me mentioned building a giant swimming pool and water park, a big bocce court, a skateboard park, a marijuana pea patch or a night club.

Others offer a pragmatic approach: Keep the tunnel as a bypass for traffic. Many suggested using the space as shelter for people experiencing homelessness.

As I returned to capture a different viewpoint of the tunnel — you’ll likely recognize the view of the north entrance by Aurora Avenue North on my sketch — I thought I’d also share some of the insightful replies I received. Below are some excerpted messages:

“The Battery Street Tunnel runs 3,140 feet under your fair city. When it is closed, why not turn it into a permanent shelter for the homeless. Here are some suggestions: Close off each end so that the wind does not howl through the tunnel. Situate double wide trailers at each end that house services such as: A police station filled with compassionate and caring staff. A kitchen run by local charities to feed the homeless on a regular basis. A health clinic staffed by volunteers from our health-care community. A needle-exchange site. An employment office to assist those homeless individuals who seek jobs. Dumpsters situated throughout the tunnel. Bathrooms and showers could be installed at regular intervals. A legal office staffed by volunteers from our many lawyers in the city. A place where a laundry and donated clean clothes were available.” — Ron Joslin, Kelso

“My thought is that it continue to be used for local access. Once the viaduct is taken down local traffic can then be routed between the Western/Elliott area and Lower Queen Anne/Dexter/Mercer. Also, possibly Metro could consider establishing a route between the two areas (perhaps bus-only). With the population growth continuing, it would be prudent to take advantage of established infrastructure to allow for movement of people.”  — Scott Remillard

“My proposed use of the old Battery Street Tunnel is a partial solution to the Seattle homeless crisis. This housing would be managed by one or more of the local agencies that provide housing. One side or a portion of the tunnel could be used for youth only. I know there are many issues to use this site but creative thinking can solve most of them. Restrooms could be supplied by porta potties; there are ramps to the tunnel at the south that could be used for access. Cooking facilities could be found nearby, or created at one or both ends of the tunnel. I would think there are old office cubical walls from Amazon or others that could be used to create individual living spaces. A lockable locker could be used for personal items. There would be no need for tents in the tunnel.” — Terry Gaddis, West Seattle

“We could also turn it into a huge campground (supervised) for the homeless. Or fill the space with rentable tiny homes. We all know the homeless problem will still be with us in 2020. This space is a valuable city asset that should not be wasted.” — Bob Stevens

“I like your idea of making the Battery Street Tunnel into a pedestrian boulevard of shops and restaurants, etc. What comes to mind is Camden Markets in London. It was a major industrial area, which starting in the 1970s became a market. … I could visualize something along the same lines. A unique Seattle gem. Let’s not just fill it with rubble.” — Peter Spouse

“I understand the tunnel is old and not up to current safety standards for a highway, but could the tunnel be used as a 30 mph city street with a single lane in each direction? If so, this would leave room for road shoulders which could increase safety when coupled with the lower speed limit. There might even be room for bike lanes. Could SDOT “purchase” this asset from WSDOT? While mushroom farming (and the other potential uses identified during the Recharge the Battery contest) may sound “fun,” the tunnel was designed to be a road and it still has value to the citizens of the City of Seattle as a direct connection between South Lake Union and the Seattle waterfront. Let’s support Sally Bagshaw’s proposal to mothball the tunnel (for now) while the community explores all the options.” — Jeff Roberts, Seattle

P.S. I recorded a video walking along Battery Street. You may watch it on my Facebook Page at www.facebook.com/seattlesketcher.