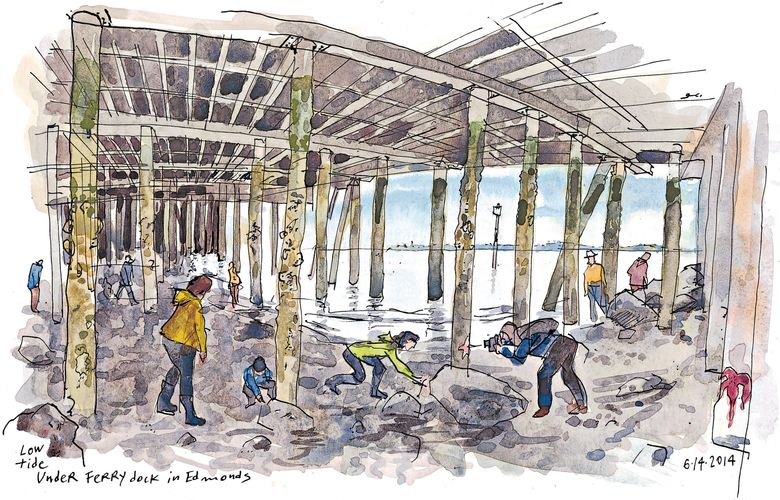 An excursion to the Puget Sound shoreline never disappoints, especially during the extreme low tides that usually happen around the summer and winter solstice.

In Edmonds, the tide reached its lowest point of the year, minus 2.98 feet, last Saturday at 12:21 p.m. That was so low that people could sneak in under the ferry dock, a rarely accessible area where the waterline would rise 15 feet by 7:45 p.m. and reach almost to the top of the pilings seen in my sketch.

As cars boarded the ferry to Kingston a few feet above and the tide gradually rose, I stood there to capture the scene. People seemed well accessorized for the exploration, wearing rubber boots and carrying cameras to document the suddenly exposed marine life.

I happened upon Bob Russell, a marine biologist from Mukilteo, who said this is his second-favorite spot to visit during low tides — the first one being Alki Beach. His daughters called out every sea creature they saw with excitement: “A sea star!” “A live crab!”

Following their lead paid off when they spotted something I’d never seen. I crouched down and admired the bright red and green streaks of the “Christmas anemone.”