SOUTH OF OLYMPIC NATIONAL FOREST — Reacting to the auditory assault of clanging metal, barking dogs, shouts and rifle blasts, a 168-pound American black bear shot out of the open end of a culvert trap and hightailed it into the woods off a logging road in Grays Harbor County.

His sister, weighing in at 135 pounds, took a little more time to overcome her fear and confusion before she, too, ran for the trees and away from the humans who each had driven more than 100 miles to witness the bears’ return to the wild.

“I’m just glad they came out of the trap and are safe,” said Dustin Prater, a Washington Department of Fish and Wildlife (WDFW) police officer who, with his Karelian bear dog, Spencer, has attended well over 20 bear releases in the last nine years. “Hopefully they’ll stay away from humans and have a long life.”

The cubs, now yearlings, were the 106th and 107th orphaned or injured bears to be raised or treated at the PAWS Wildlife Center in Lynnwood, then released months later in the same general area where they were originally found. Fitted with GPS collars and tattooed with identification numbers on their gums, the bears are also among the latest subjects of a long-term research study being conducted by Rich Beausoleil and Lindsay Welfelt, both WDFW biologists and the agency’s bear and cougar specialists. 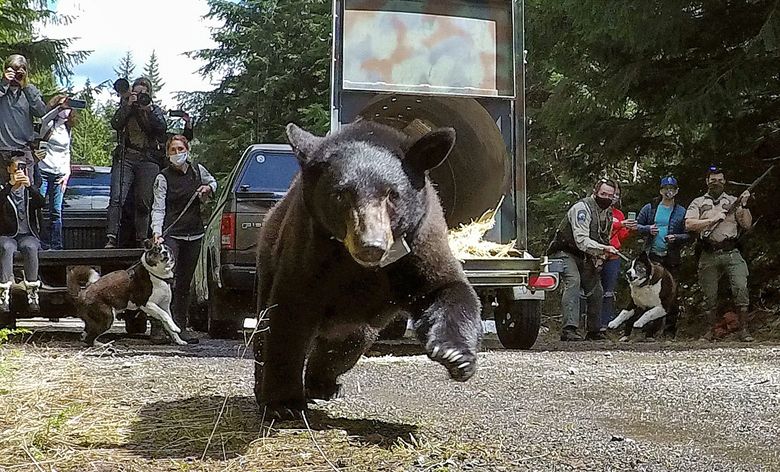 Watch: Two bear cubs, a brother and sister, were released back into the wild

The siblings, now 15 months old, were only two weeks old when a forest worker and his dog inadvertently disturbed their den in February 2020, scaring away their mother. She never returned. The worker contacted the WDFW, which for years has partnered with PAWS to rehabilitate sick, injured and orphaned wild animals before releasing them back into their natural habitats. In any given year, PAWS staff cares for 150 to 175 species and current residents include owls, hawks, ducks, a great blue heron, raccoons, chipmunks, a mountain beaver and three bobcats that are set to be released in Whatcom County this week.

“Their eyes and ears weren’t open and their teeth hadn’t even erupted,” Jennifer Convy, PAWS senior director of wildlife, said of the cubs, which each weighed less than 2 pounds when they arrived and were the youngest ever to be raised at the center.

Though the cubs were bottle-fed at first, their caregivers didn’t cuddle them or coo at them and instead wore bear-scented bear suits during feedings once the cubs’ eyes had opened. At PAWS, one of two rehabilitation centers in Washington licensed by the state to raise American black bears, the staff and volunteers take pains to be invisible to all the animals in their care. Video cameras were used to monitor the cubs and guillotine doors allowed staff to keep the bears separated from caregivers while they cleaned the enclosures and hid skunk cabbages, blueberries and other foods found in the wild.

“They don’t see us, ever. We don’t talk to them. We don’t name the animals because we don’t want our staff or volunteers to get attached,” Convy said. “We make them work hard for their food.”

In October, an elk hunter found an orphaned cub he saw alone over several days in the forest between Cle Elum and Wenatchee, according to Convy and Beausoleil.

The cub, 9 or 10 months old, was also brought to PAWS, where she was eventually introduced and housed with the two cubs that were released last Tuesday.

“They play and fight and compete for their food. They kind of help each other learn the foraging skills mom isn’t there to help with,” Convy said of the practice of housing same-species animals together.

On Wednesday, that bear was released near Blewett Pass.

For now, PAWS’ bear enclosures — which have capacity to care for up to six bears — are empty, providing a welcome reprieve before new cubs become orphaned over the summer and fall by hunters, cars or other means.

PAWS — an acronym for the Progressive Animal Welfare Society — started out in 1967 as a shelter for domestic cats and dogs in need of adoption. People began bringing injured bunnies, possums, birds and other animals to the shelter, propelling the nonprofit into wildlife rehabilitation in the early 1980s, CEO Heidi Wills said.

“We contend with a lot of noise, people honking horns, voices from the road, fireworks and also human smells,” Wills said.

In recent years, PAWS raised $25 million to purchase 25 acres along Highway 9 in unincorporated Snohomish County and prepare the site to become home to a wildlife rehabilitation hospital.

“We’re expecting the building permit from Snohomish County any day now,” Wills said in a Wednesday phone interview. “In Snohomish, we can keep these animals from acclimating to human scents and sounds because their best defense in the wild is a healthy fear of humans.”

By month’s end, Wills said PAWS will be launching a new capital campaign to raise $7 million to build enclosures for large raptors, medium-sized raptors, songbirds, small mammals like raccoons and beavers, medium-sized carnivores like bobcats, lynx and wolverines, and of course, black bears.

The new bear enclosures, which alone are expected to cost more than $1 million, will have capacity for 15 to 20 bears, separated by age and size. While PAWS’ shelter for companion animals and its administrative and educational staff will continue to work out of the Lynnwood location, Wills expects to move into the new wildlife center sometime next year.

On Tuesday, the bear siblings were sedated, then underwent full veterinary exams before they were carried outside on tarps and set down in the grass. Beausoleil and Welfelt, the WDFW bear and cougar specialists, knelt down beside them, attaching the GPS collars, tattooing identification numbers in their mouths, and measuring the bears’ bodies, heads and legs.

The bears were then loaded up into a straw-lined culvert trap, which looks like a section of a metal culvert outfitted with air vents, barred windows and a guillotine door at one end that can be pulled open with a rope.

After the bears were settled, Welfelt climbed in after them and administered drugs to reverse the sedatives they’d been given. Once the bears were awake, Beausoleil and Welfelt led a caravan of vehicles south and west of Lynnwood, to a forested area about an hour’s drive north of Montesano.

As of this year, the two wildlife biologists will have measured bear population density in 10 areas on both sides of the north Cascade Mountains, providing the first research-based preliminary estimate in state history that shows Washington is home to around 20,000 American black bears.

“Not a lot of agencies have the funding to do this kind of work. We hope to leave the state of Washington with better (bear) management than when we arrived,” said Beausoleil, who has worked for the state for 19 years. “We’ve found our public here in Washington appreciate we go the extra mile and give these (orphaned cubs) a second shot at life.”

American black bears are thought to be the most abundant of the eight bear species found on the planet, though Canada probably has more black bears than are found in the U.S., according to Beausoleil and Welfelt.

Roughly 60% to 70% of cubs survive their first year — but how frequently female bears give birth and the health of their offspring are good ecological indicators of the availability of food sources. Bears are omnivores, and while 85% of their diet is plant-based, they are opportunistic eaters, which is why it’s important they don’t come to associate humans with free food. Indeed, bird feeders and unsecured trash bins and camping supplies are the most frequent causes of bear-human conflicts, they said.

Together, Beausoleil and Welfelt have located some 350 bear dens, usually excavated into or under stumps, fallen trees or rocks. When they find a sow — a sexually mature female bear with cubs — they will sedate and collar her, first rubbing Douglas fir or cedar essential oils on their hands to mask their scents and then returning the bears to the positions they were found in and packing down snow to erase signs of a disturbance.

In the dens, “there’s usually just enough room for the bear to fit, curled up into a ball,” on top of a circular platform made from ferns and tree boughs, Beausoleil said.

“They spend up to six months in there, so they put a lot of work into it,” Welfelt said.

Coyotes, bobcats, mountain lions and male bears are all mortal threats to cubs, who can’t survive their first winters without their mothers, they said.

The wildlife biologists are studying how the orphaned bears raised at PAWS fare after their release, compared to their wild-reared brethren, and are collecting data on den use, reproduction, litter size, mortality and how bears establish and use their home ranges. One cub taken to PAWS after she was found orphaned in Okanogen County in 2016 and was released in 2017 had her first litter of cubs in January.

“We’ve been to her den several times and replaced the (GPS) collar twice,” Beausoleil said. “She reproduced and had cubs of her own. … This was kind of a turning point for us.”

After all, the whole point of rehabilitating orphaned bear cubs “is to protect and perpetuate the species,” he said. “These are wild bears and it doesn’t take much for them to revert to a wild bear.”

The Washington Department of Fish and Wildlife notes that black bears live in a variety of forested habitats across the state, from coastal rainforests to the dry woodlands of the Cascades’ eastern slopes. Hikers are encouraged to carry bear spray and whistles, travel in groups, make noise and avoid surprising a bear at close range. Visit WDFW’s site for more information.

The WDFW has also created a YouTube video to help hunters differentiate between black bears and endangered grizzly bears, which only live in northeastern Washington. Watch the video here.