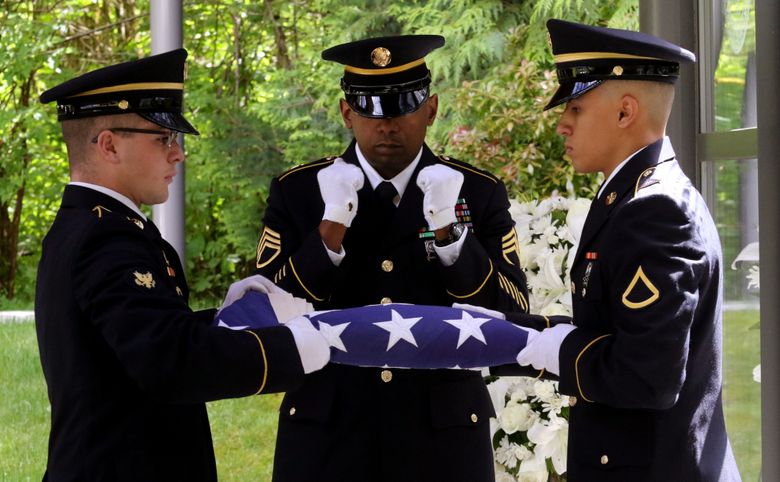 “It was beautiful, it was absolutely beautiful. More than I had ever expected,” said one widow of the ceremony for her husband. There have been 49,000 such burials for veterans over the years at Tahoma; in another two decades, the cemetery's capacity of 100,000 will be reached.

TAHOMA NATIONAL CEMETERY — By now, after some 49,000 burials, there is a certain routine to the days here.

When you drive in, an electric sign scrolls the day’s schedule. This past Wednesday there would be 17 services. The families in their cars are guided to a line.

Rain or shine, Monday through Friday, the services go on for the vets. This is a serene place, with a well-tended 158 acres of greenery on the outskirts of Covington. Birds chirp and sometimes you hear a lawn mower, as the fields are kept just so.

But then every half hour or so, there is the unmistakable echo of rifle gunfire. Even with blank shells used, it is loud. It is an honor guard firing three volleys. The custom dates back to the halting of fighting so opposing armies could remove the dead from the battlefield. Three volleys meant the fighting could resume.

Scherer was honorably discharged on Jan. 11, 1946, as a staff sergeant from Company H, 511th Parachute Infantry in the South Pacific. His medals included the Bronze Star for his service in the Philippines and New Guinea. He then spent 31 years with the Seattle Fire Department, retiring as a captain.

“He didn’t talk about it much,” says his wife, Sylvia Scherer, about his time parachuting into combat. “They suffered a lot of casualties. It was like a turkey shoot. It was pretty brutal.”

It’s not uncommon for the families to say that war memories weren’t talked about much by the vets, not the bad times. It was at reunions with his old mates that Wally would talk about the war, says Scherer.

Ceremony No. 11 had just ended. They don’t last very long, around 20 minutes, but each minute is emotional for the families.

“It was beautiful, it was absolutely beautiful. More than I had ever expected,” says Scherer.

It is a ceremony that’s not part of the lives of most Americans. The VA estimates only 8 percent of Americans are veterans.

A volunteer chaplain such as Bruce Feltmann, 74, ex-Navy, ex-Army, who then worked at the Kenworth Trucks assembly line here, helps guide the ceremonies.

Since he began helping here seven years ago, he’s clocked in 1,000 hours. That’s a lot of veterans memorialized.

He begins with this invocation, a variation of which is commonly used at such observances: “Another veteran has gone to the high command … now enrolled in that great spirit army whose marching causes no sound … but in our memories their soul and voice go marching on …”

If the family wants something nonreligious, that’s fine.

On the headstones, families have a choice of no emblem or one of 66 approved religious symbols. There are variations of the cross (Latin, Russian Orthodox, Lutheran, Episcopal, Greek and others). There is Muslim, Sikh, Jewish, Mormon, Hindu and the Native American Church of North America. There is one for Druids, and one for atheists.

This being the military, the headstones are all standardized, granite, 3 inches thick, 13 inches wide, 42 inches tall.

The cemetery has a handout with “terms of endearment,” such as “BELOVED HUSBAND,” although family can choose their own, as long as they’re approved. They are to be in all caps, with a few exceptions such a small “c” in “McDONALD” or a small “an” in “Van HEFFLIN.”

The ritual includes having at least two active-military personnel — such as from the state’s National Guard — at the ceremony. Their duties include meticulously folding the U.S. flag that’s draped over the casket into a final triangle and presenting it to the next of kin.

Receiving the memorial flag is an emotional time for the families.

Venus Wallace, of Tacoma, is another widow at one of the services.

Her husband, Maurice Wallace, died May 6 at age 76. He served two tours in the Army in Vietnam and two tours in Korea, says his family, and then went on to work for the Postal Service.

“He loved his job in the Army,” says his wife. “I’m going to take this flag and put it in my living room in a glass case right on the fireplace so everybody can see it every day, so his grandkids are able to see it.”

The ceremonies keep going, one caravan of cars after another making their way to one of three outdoor committal shelters.

Now it is the turn for the service of Harvey O. Gunter, who died May 4 at age 93 in Port Orchard. Now it was his son, daughter and sister commemorating him.

The daughter, Holly Gunter, says her dad didn’t talk much to her about his injuries in the Korean War. Gunter had been in the Navy during World War II and then went into the Army in combat infantry.

But something pops up in a Google search. It appears to be a syndicated column about veterans that ran in 1963. Gunter is named “veteran of the week.”

It tells how “all the days that he lay in hospital beds, all the time while in hospitals, he was learning to regain his independence.” Gunter would go on to the University of Washington, earn a mathematics degree and become a high-school teacher.

The ceremony ends today with the powerful playing of “Taps” by a volunteer bugler. Otherwise, a recording would have to be used, as is sometimes the case.

Joe Lavoie is chairman of the Tahoma National Cemetery Support Group. He is 75, ex-Navy. He says the group has 215 volunteers, and around six to eight buglers.

But for now, it all just keeps going.

This September will mark the 20th year since Tahoma National Cemetery opened.

Of those 49,000 burial grave sites, which includes columbariums for the ashes of the dead, about twice as many are for cremations than caskets.

Thomas Yokes, director of the cemetery, says the cemetery’s capacity for around 100,000 total burials will be reached between 2035 and 2040. Well before that, says Yokes, a search for a new National Cemetery in the area will begin, as Tahoma is the only one in the state

Driving away from one of the ceremonies there is another sight that makes one pause.

It is of lone figures standing by grave sites, often older women.

According to the V.A., 92 percent of veterans are men.

Paula Jean Sires, of Renton, is one such woman.

She had been married for 57 years to Don Sires, who died a year ago. He served four years in the Navy, joining right out of high school. In civilian life he’d work as a nursing home administrator.

When she dies, she says, she’ll be buried on top of her husband’s casket.

“It was something he was very proud of,” Sires says of her husband’s military service. She comes to the cemetery every couple of weeks.

“I talk to him, tell him what’s going on with the family, neighbors,” she says. For his birthday, Sires brought him irises and snowball flowers from their garden.

Yes, says Sires, she believes her husband hears her.

It’s a sunny afternoon. She lingers on by her husband.