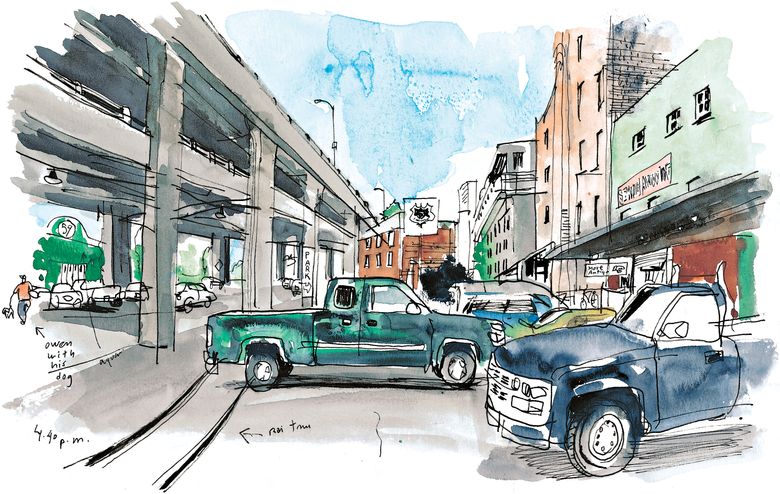 “An elevated freeway right on the waterfront? What a waste of space.”

That’s what my little tourist brain thought about the Alaskan Way Viaduct when I first visited Seattle in 1995, more than a decade before I moved here for good.

But now I understand why the viaduct is there. When it was built in 1953, the waterfront wasn’t quite the playground for tourists it is today. It was a logical spot to build the city’s first major transportation corridor, replacing some of the railroad tracks that had run along the industrial shoreline since the late 1800s.

As the worn-out structure begins to come down next month, I find myself wondering if anyone will miss it.
I recently sketched my way from Battery Street to the stadiums, trying to capture the scenes that will likely disappear by the time the aging freeway is completely demolished in four or five years.

The folks I ran into were an eclectic bunch: day laborers, lost tourists looking for Pike Place Market, ferry commuters, the homeless and entrepreneurs who set up their businesses here decades ago.

Most of them agreed there’s not much they’ll miss about the viaduct itself. Not the noise, not the obstructed views. But I happened upon Tom Lelinski of Buffalo, N.Y., who was enjoying an ice cream cone beneath the viaduct during his fifth visit to Seattle. It became clear that even tourists acccept the concrete giant as part of the vista. “It’s part of the culture,” said Lelinski. “It’s hard to picture it not being here.”

These sketches from my Aug. 30 walk follow in chronological order:

A-1 Laundry has been a fixture at the historic Hull Building at the south entrance of the Battery Street Tunnel since the 1950s. The owner can’t understand why the viaduct is being replaced with a tunnel that has no downtown exits.

If it wasn’t for the chain-link fence topped with barbed wire, the “Rave Wave Cave” art project at Bell Street and Western Avenue could be as interesting to explore as the Fremont Troll digs. The installation, by local sculptor Dan Corson, was commissioned by the city in 2002.
Unfortunately, the spot is far from a tourist destination. As I sketched, day laborers stood awaiting jobs, a man walked by looking inside trash cans and someone else asked me if I had change for a twenty. “Don’t worry, I’m not going to rob you,” said the same woman who later walked by with two guys, each carrying their own six-pack of beer.

The cavernous space under the viaduct is perfect for parking. A German tourist said he paid $6 to park for 2 hours.

The viaduct may be an eyeshore, but the views you can see through it are another story. I found a multitude of interesting vantage points framed by the freeway’s pillars. I sketched this view of Elliott Bay, with West Seattle in the background, from the outdoor staircase of the Pike Place Market garage.

Thank goodness for the fish tacos I had at El Puerco Llorón for lunch. They gave me enough energy to continue sketching all the way to Sodo! Brent Youngren, owner of the Mexican restaurant at the Pike Street Hillclimb, said he’s ready for the elevated freeway to go away. “I won’t miss the constant noise, and I won’t miss the obstructed views.”

Ken Eubank opened his Seattle Antique Market in the shadow of the viaduct in 1978. He fears small businesses may not survive the redevelopment of the waterfront. But they won’t miss the threat of the freeway falling down.

Eubank recalled seeing streetlights along the top swinging back and forth like fishing poles when the 6.8 Nisqually quake hit in 2001. “I was scared to death,” he said.

What do shoes and photography have in common? A space near the viaduct where Jim Hadley has run his fashion photography studio and his Experience Shoes store since 1976. The native New Yorker, who was getting ready for a photo shoot when I stopped by, said he is indifferent about the fate of the viaduct. “People come here because of my product,” said Hadley, adding that he was the first one to bring Dr. Martens shoes to the Pacific Northwest.

Ferry commuter Kim Bullman said she can’t imagine the viaduct being gone. “The viaduct IS Seattle!” she exclaimed. Her solution: save a piece and turn it into a park.

Robert Joseph Tripp is one of eight homeless men who camp at the south end near the stadiums. “I’m out of here,” he said when I asked about his plans. “I have a ticket to North Dakota in my backpack.” Demolition of the viaduct in Sodo will begin in October.

Construction of a new viaduct ramp in February made it hard for customers to access the Triangle Bar, a popular watering hole near the stadiums. Owner Brian Honda (below) is not looking forward to any more road closures due to construction, but he said the city will be better without the viaduct. “It will open up the waterfront, and that’s a good thing.”