Wolves are the most widely distributed of all land mammals and one of the most adaptable. 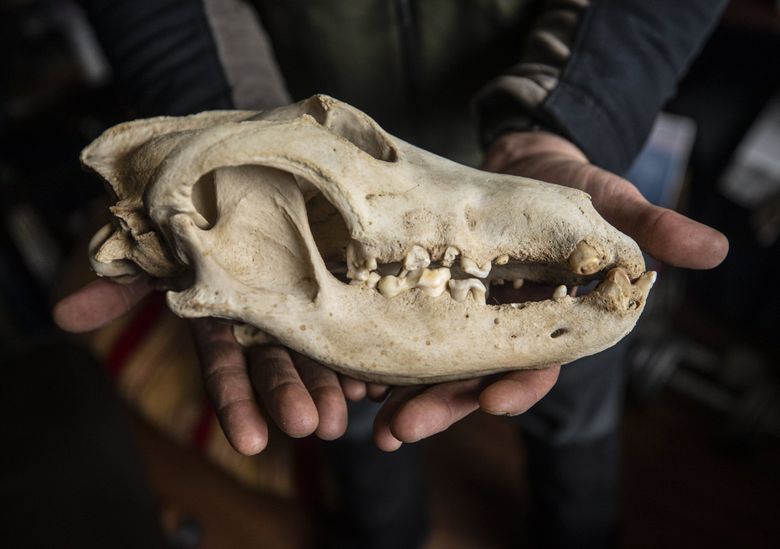 In 2008, Washington confirms the first breeding pair since the 1930s, the Lookout Pack, on the east slope of the North Cascades in Okanogan County.

Wolves were mostly extirpated in Washington by the 1930s after nearly a century of shooting, trapping, poisoning and government extermination campaigns. Wolves were common in most of Washington before 1800, with about 2,300 to 5,000 wolves statewide before European settlement.

In 2020, at least 178 known wolves in 29 packs in Washington were counted by the Washington Department of Fish and Wildlife and Confederated Tribes of the Colville Indian Reservation. Most are in the northeastern corner of the state.

● No pack has yet been documented south of Interstate 90.

Wolves have been protected statewide as an endangered species since 1980 under Washington State law. In 1973, they were listed for federal protection in the western two-thirds of Washington under the Endangered Species Act.

● The Trump Administration delisted the wolf nationwide in March 2019, returning wolf management to states and tribes.

Where Washington wolves came from:

Wolves were not reintroduced to Washington. They walked in on their own, naturally dispersing from nearby states and Canadian provinces.

Wolves eat nearly everything. In Washington, major prey are deer, elk and moose. They also eat coyote, beaver and every small mammal, from rabbits to wild turkey, mice, squirrels, grouse and even songbirds.

● They also scavenge dead animals and will harass cougars, bears and coyotes off kills and compete with them for prey. Wolves in coastal British Columbia eat salmon. They prey on domestic livestock and kill dogs.

● They live a feast and famine existence, wolfing (!) as much as 22 pounds of food at a time but can also fast for weeks if they have to.

Wolves can live as long as 13 years in the wild, and longer in captivity (up to 17 years.)

Wolves sit atop their food chain and are mostly not preyed upon by other animals — though they can be killed in fights with other wolves and in efforts to take down large prey, such as moose. Humans are the chief cause of wolf mortality.

● They are the fourth-largest carnivore on land in the Pacific Northwest (after grizzly bears, black bears and cougars). They are similar in size to a cougar.

Wolves can live just about everywhere in North America and can be found in forests, prairies, tundra, barren ground, mountains, deserts and swamps. They will visit large cities and can tolerate temperatures from -70 to 120 F.

They can swim, climb, lope and run. They can run 34 to 38 miles per hour, and swim as far as 8 miles. They spend at least 30% of their time hunting, and cover 20 to 30 miles a day — but will easily travel more than 100 miles a day when prey is scarce. Their usual rate of travel is a 5 mph lope, in single file in a straight line, over the easiest terrain available: trail, road, coastline, frozen rivers, rocky ridges.

● Their elongated muzzle and shape of their inner nose ensure optimal oxygenation and efficient cooling, even in hot climates. During the nomadic phase of their year (winter) a wolf pack can travel up to 35 miles overnight and up to 45 miles in 24 hours. The typical pattern is to travel for a long distance while hunting, making a kill, feeding, resting, local movement near the kill, abandoning the kill and repeating the cycle.

● Wolves have an extraordinary sense of smell; with an estimated 280 million olfactory receptors (compared with 6 million in humans) their sense of smell is estimated to be at least hundreds of times more acute than ours. This sharp sense of smell helps wolves sniff our infection and other signs of vulnerability to help them target prey they can more easily kill.

More information on wolf anatomy and behavior can be found at livingwithwolves.org.

Typical adults are 90 to 120 pounds for males and 80 to 100 pounds for females. Color ranges from black to gray to white, and the coat color can change over time.

Wolves are highly territorial, defending a pack territory or home range from 200 to 500 square miles; 350 square miles is average in Washington. To a remarkable degree, these territories do not overlap — as if fenced or walled.

● In Washington, wolves typically live in packs of 2 to 13, with an average of 5 wolves to a pack, including the dominant, breeding male and female pair. The rest of the pack might consist of pups from the current year and a few offspring from the past year or two, subordinate to the breeding adults.

● Adult wolves of both genders share in the care and feeding of the young, which, as with dogs, are called pups. Wolf packs can and do migrate long distances from where they raise their pups and where they take those pups in winter to hunt their prey.

● The pack hunts, feeds, travels and rests together and shares pup-rearing responsibilities including hunting and tending pups at the den or at rendezvous sites.

● Lone wolves are in transition to finding or establishing a new pack or territory.

Wolves usually don’t breed until at least 2 years of age, between the dominant male and female of the pack. Den sites can be underground burrows dug by the female, often at the base of a large tree, stump or fallen log. Sometimes, a natural shelter might be used: an abandoned beaver lodge, a hollow tree, or a shallow rock cave.

● Pups are moved to a series of rendezvous sites after reaching about 8 weeks of age, when weaning occurs. Permanent canine teeth are grown by 7 months and long bones have finished growth by 12 months.

● Pups are blind and deaf at birth and completely dependent on their mother. At about 2 weeks, their eyes open and they are coordinated enough to stand and walk. By 3 weeks, they are exploring the mouth of the den and starting to ingest solid food regurgitated by adults. By 5 weeks they are out and about, interacting with adults outside the den.

● Litter size is usually four to six pups, and parents produce one litter a year. Pups survive better in bigger packs. Offspring remain with their parents for 10 to 54 months and usually disperse once sexually mature, to join or form new packs of their own.

Wolves hunt in packs. They are “coursing” predators, meaning they flow like a coursing river over the land, running their prey down, usually in packs.

● They are carnivores through and through, with 42 teeth, massive jaw muscles and large stomach capacity.

● Their jaw is closed by several massive muscles. The skull is long relative to its width, allowing maximum opening of the mouth and jaws.

● Wolves principally use their incisor and canine teeth to stab and hold their prey, and slash at the hide and muscle to produce lacerations and extensive bleeding. While eating, wolves use their incisors to grab and hold fallen prey. Other teeth are deployed to slice through hide and meat. Others are adept at crushing and grinding.

● They preferentially target young prey, and wolf pup births are timed to coincide with the pulse of recently born deer, elk and moose. They also will cull herds — running them to sort the old or infirm.

● A typical hunt starts with a staredown as the wolf tries to get the animal to run. Then comes the sequence of rush, chase and attack. Their bravery amid animals far larger and cunning — and knowing when to walk away — is legendary. So is their adaptability and opportunism.

Peak breeding season in the Northwest is in late February. Pups are typically born in late April after a 63-day gestation period. From mid-April or early May until September or early October, pack activity is at or near the den or rendezvous site. Adults bring food back to the pups from distances as great as 30 miles away.

● These are specific resting and gathering areas used by the wolf pack after the pups emerge from the den. These can be in wet meadows or forest openings near the den site, but sometimes are several miles away. The pups are carried to the site by adults.

● By September, the pups are traveling and hunting with the pack.

● In the winter, wolves will travel in one another’s tracks in deep snow, to move more efficiently. What looks like the tracks of one wolf can be an entire pack.

● The pack hunts throughout its territory until the following spring, when the cycle repeats.

MORE ONLINE
To learn more about wolves, see three videos from the Washington Department of Fish and Wildlife at seattletimes.com/pacificnw.